In ‘Marvelous Mrs. Maisel,’ The Forward Gets A Cameo 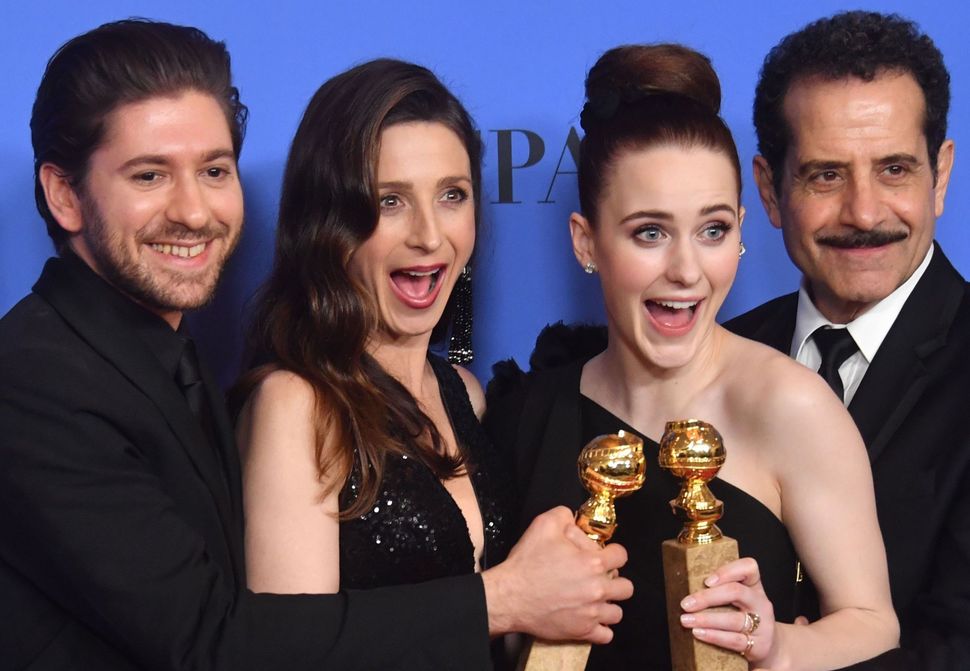 The stars of Amazon’s ‘Mrs. Maisel’ Image by Getty Images

We are — as Miriam Maisel might say — totally plotsing.

The highly anticipated second season of Amazon Prime’s runaway hit “The Marvelous Mrs. Maisel” will stream all ten episodes starting Wednesday. The Forward got a glimpse at the first five, and we’re happy to toot our own shofars and say that we get a shout-out.

(Spoiler alert: no spoilers! We would never do that to you.)

In the third episode of the second season, Midge volunteers to help plan an acquaintance’s wedding, citing the success of her own wedding (if not the marriage.) She tells the bride-to-be:

“Don’t worry about money! What you need is experience. And I have experience. The marriage didn’t stick but the reception was unforgettable. It got a write-up in the Jewish Daily Forward. In Yiddish, so it didn’t get a wide readership, but the picture was sensational!”

Well, ring-a-ding-ding! This is marvelous indeed, and according to Forward archivist Chana Pollack, not totally inaccurate!

The Forward — then known only as “the Forverts” — did indeed publish exclusively in Yiddish in the mid-50’s, and while readership was worldwide, Midge’s generation would likely not have reached for the paper. People like Midge and Joel’s parents — Jewish, New York-dwelling, semi-secular Yiddish speakers — were almost certainly readers, and would have regaled their children with humor and life stories from the Forward, like the iconic Bintel Brief advice column, and maybe even offered fashion tips from the Lady’s Home Page.

One thing Midge is likely unaware of is that the Forverts had a wide international readership during this time and regularly published “kroyvim gezukht” — notices of people seeking missing relatives after the Holocaust, as displaced person camps continued to clear out.

The Forverts did frequently publish wedding announcements, so it’s not impossible that Midge and Joel’s union could have gotten a write-up. But here’s the fly in the cold cream — though the Forward of the mid-50’s had pivoted away from socialism, pivoting to the Democratic party, vast segments of our readership and editorial staff were connected in some way to the garment business. Most people in the shmatte business belonged to or had a connection to the International Ladies Garment Workers Union (ILGWU,)which was founded primarily by Jewish immigrant women, and the Forward and the ILGWU supported one another.

It’s hard to imagine that the write-up of a wedding of the son of a major factory owner would make the Forward — since Joel’s father runs a garment business and his employees (whom he treats pretty poorly) would largely have been members of ILGWU, the society wedding would probably not have appealed to Forward writers and readers. And since Midge’s accomplishments don’t seem to include involvement in labor movements, it’s even less likely. 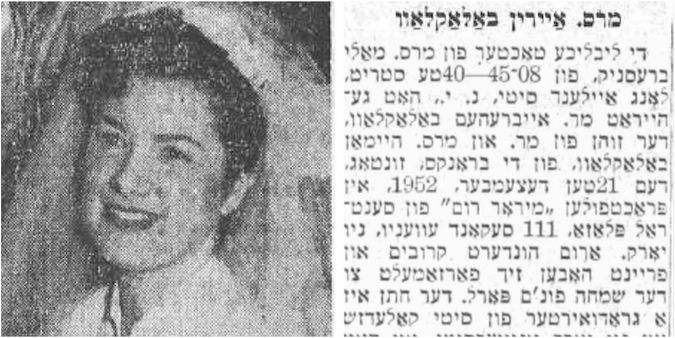 A wedding announcement in the Forverts in 1953. Image by Forward Archives

This wedding announcement, printed in the Forverts in 1953, reads:

Mrs. Irene Balaclav, the amiable daughter of Mrs. Molly Bresnik of 45-08 40th Street, Long Island City, NY married Mr. Abraham Balaclav, son of Mr. and Mrs. Hyman Balaclav of the Bronx, on Sunday, December 21, 1952 in the magnificent “Mirror Room” of Central Plaza, located at 111 2nd Avenue, NY. Around 100 relatives and friends gathered at the couple’s celebration. The groom is a graduate of City College and New York University, and recently served in the US Army’s medical corps. He’s currently a practicing accountant.

It’s absolutely true that the Forverts loomed large in the lives of Jews of the Maisels’ time and milieu. As Jewish communities dispersed from the Lower East Side, the paper offered a venue for scattered Jews to gather. As Pollack told me, “The parents’ generation, Midge’s parents, was eager to hear stories from the Forverts because they wanted media that reflected them.” Some things don’t change.

In ‘Marvelous Mrs. Maisel,’ The Forward Gets A Cameo