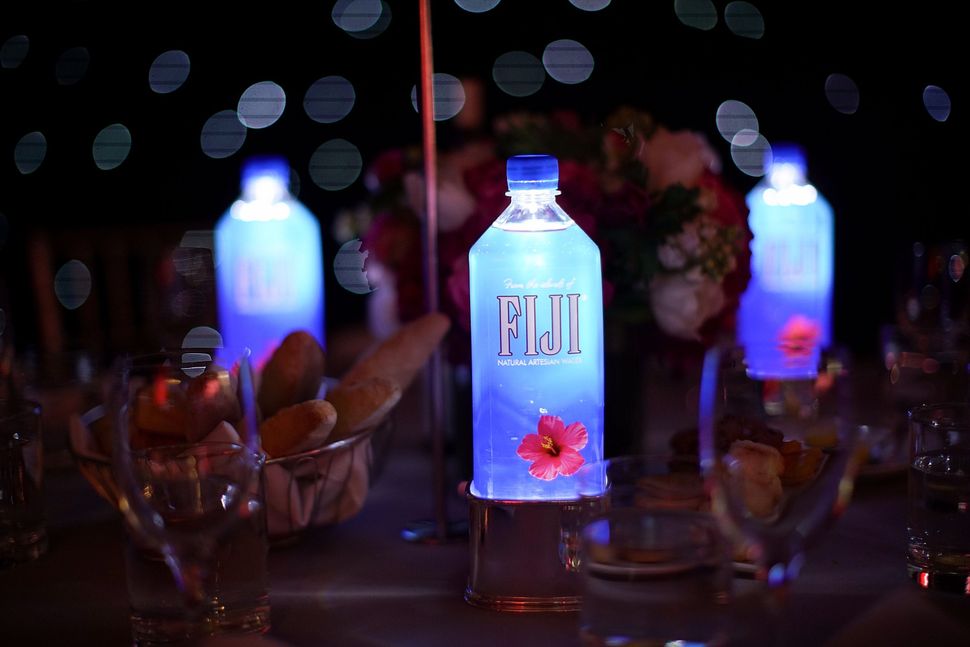 Who won this year’s red carpet at the Golden Globes? If you ask the internet, it was Kelleth Cuthbert, aka “Fiji Water girl,” a raven-haired model in a blue dress who was discreetly intrusive in offering parched celebs Fiji Water from a tray.

While we can all have fun with the pretension of the bottled water brand, ever-so-linked to status, and the out-of-place je ne sais quoi of Cuthbert’s presence, we shouldn’t overlook the fact that Fiji Water is kind of an evil company. Mother Jones has the receipts.

In 2009 Mother Jones’ Anna Lenzer discovered a distressing pattern of corruption and complicity on the part of Fiji and its owners Stewart and Lynda Resnick (who, alas, are Jewish). The company was found to have “set up in tax havens like the Cayman Islands and Luxembourg,” to reap “a priceless benefit: tax-free status” in Fiji, and to have been silent on the issue of “typhoid outbreaks that plague Fijians because of the island’s faulty water supplies” partly due to Fiji Water’s “nearly exclusive access” to an over 17-mile-long aquifer.

Oh, and Lenzer was also arrested and intimidated by Fiji police just moments after she sent emails of her findings from an internet café. The exposé hints that government officials were in the pocket of Fiji Water and might act as their enforcers.

Rob Six, a spokesman for the company, denied such complicity, saying in a statement that the company does not endorse or “legitimize” Fiji’s government but aimed to assist” the underserved areas of Fiji’s development” by providing flood relief, health care and education to its residents.

But further evidence of corruption emerged in 2010 when David Roth, Fiji Water’s director of external affairs was deported for “interfering in Fiji’s domestic affairs.” Fiji Water nearly left its namesake nation for New Zealand in November of that year after the country levied new tax hikes. The company did end up staying when the country threatened to give the well used for Fiji’s bottling to a competitor, but for all the good they claim to do, including a water filtration initiative, the Fiji Water nearly left the nation in the lurch.

But surely there is some domestic perniciousness to Fiji’s business model too. Well, apart from the excess of plastic and waste endemic to bottled aqua, the company famously insulted Cleveland in an ad campaign saying: “The label says Fiji because it’s not bottled in Cleveland.” Cavs Country got the last laugh when its tap water was tested by the Cleveland Water Department against Fiji’s bottled offering. Fiji water was found to contain 6.31 micrograms of arsenic per liter. Cleveland’s tap had none.

Maybe next year the Globes will follow LeBron’s lead and import its water from Ohio to LA.