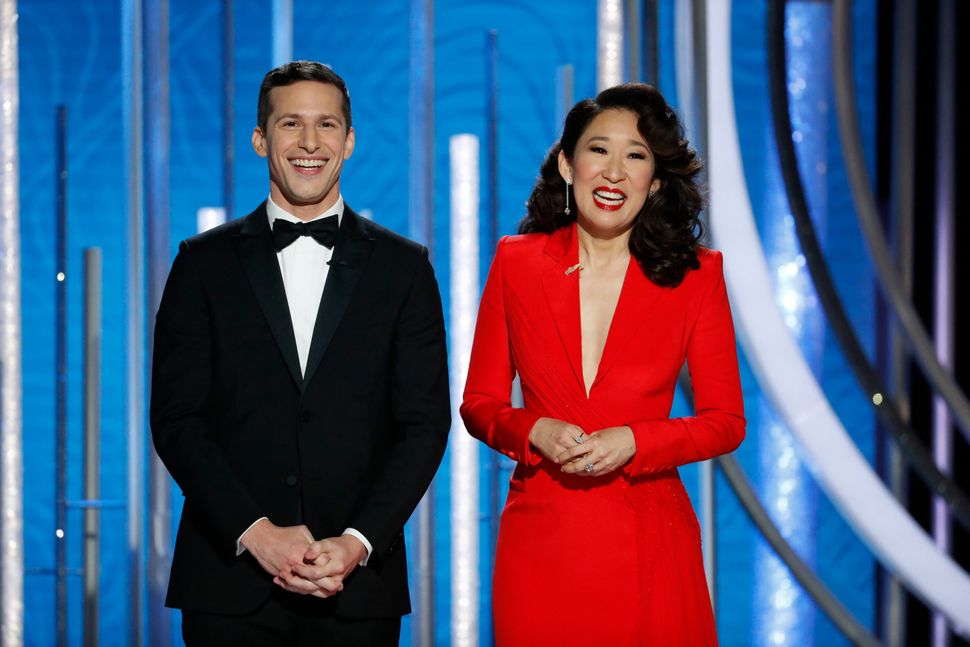 Marjorie Marrow and Young-nam Oh must be the proudest mothers on the planet tonight.

In a plunging red gown with structured shoulders, Sandra Oh took the stage at the Beverly Hilton alongside co-host Andy Samberg. It’s a historic night sub-category: award show hosting — Samberg and Oh are the first Jewish and Asian performers to co-host a major awards show.

It’s a watershed moment worthy of celebration. It’s also a demonstration of how constricted opportunities for diversity can be: one man, one woman. One racial minority, one religious minority. Both have decades of Hollywood credits under their belts (and Oh has an extra decade on Samberg.) Both representatives from groups that America has coded “model minorities.”

Well, what can we say — the day is short, the work is much, the workers are lazy, and the rewards are great. On Sunday night, Oh and Samberg seized their hosting roles as an opportunity to prod those workers into shape. “Some of you may be wondering why the two of us are hosting together,” Oh began. Samberg added that they are the only two people who haven’t offended anyone yet — not that both have minority statuses that are unlikely to alienate.

“Now we know what you guys are thinking — Andy Samberg and Sandra Oh, the two nicest people in Hollywood? This is gonna be a snooze!” Samberg said, threatening to “roast” them all, “Ricky Gervais-style.”

“Bradley Cooper,” Oh hissed, as the camera panned to the fearful-looking “A Star Is Born” creator. “You are hot,” Oh said.

“Jeff Bridges. Mr Cecil B Demile award himself,” Samberg purred. “Hey Jeff! I wish you were my dad.”

The painfully-relatable parenting jokes continued: “Crazy Rich Asians!” Oh crowed. “It is the first studio movie with an Asian American lead since ‘Ghost In A Shell’ and ‘Aloha.’” Joking that Asian moms were hardly impressed by the massive firsts achieved by the movie, Oh directed the cameras to pan to her mother. Mrs. Oh was, indeed, smiling primly. Oh went on to joke about the “Asian flush,” a concept Sandberg wasn’t familiar with.

Samberg had his tribe’s back, too. “If you’ve got some antacid out, you might as well send it to the ‘Kominsky Method’ table,” he said, going on to refer to the much-nominated “Marvelous Mrs. Maisel,” as, “the show that makes audiences sit up and say, ‘Wait is this anti-Semitic?’” (This Jewish writer, at least, often reaches for proton pump-inhibitors during “Maisel.”)

After a joke about white-washing that deftly skewered Samberg’s white, male privilege (without erasing his Jewish identity! It can be done!), Oh delivered a barn burning monologue:

“I said yes to the fear of being on this stage tonight because I wanted to be here tonight to look out into this audience to witness this moment of change. And I’m not fooling myself — next year could be different, but this moment is real. Because I see you. And I see you. All these faces of change. And now, so will everyone else.”

Later in the evening, at the point where hosts might cheekily hand out pizzas or drop candy from the ceiling to divert their audience, Oh and Samberg brought out a troupe of licensed nurses to give out flu shots.