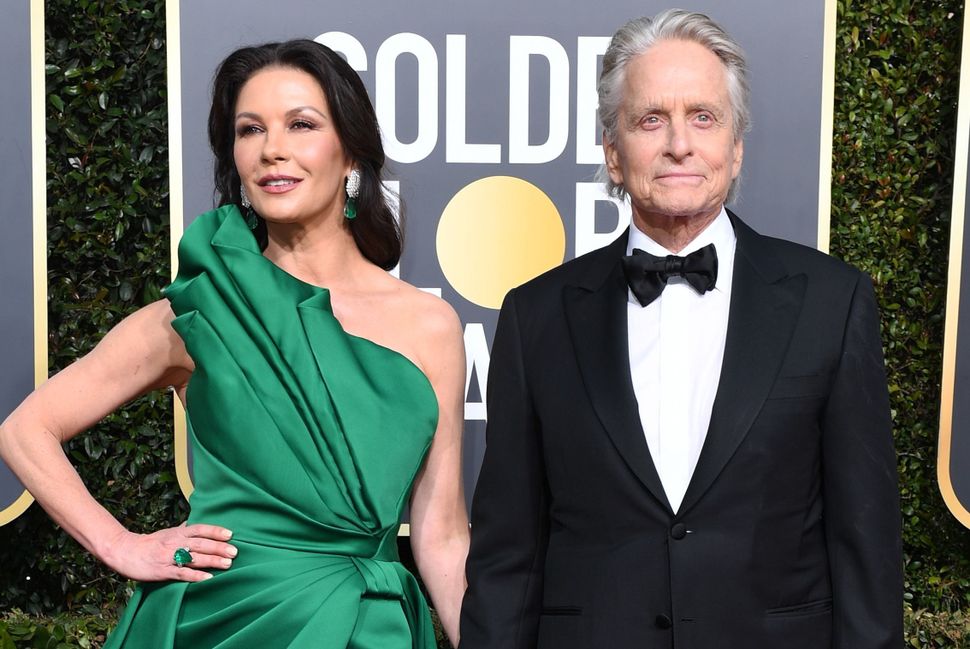 Accepting the Golden Globe award for best actor in a TV or musical comedy for his role in Netflix’s “The Kominsky Method,” Michael Douglas dedicated his win to his father, legendary actor Kirk Douglas.

Will Google searches for this Yiddish phrase soar? Or will the infinite potential transliterations defeat that possibility?

“Alter Kakers” (the correct spelling, according to Forverts Yiddishist Jordan Kutzik,) doesn’t have the sexual connotation Yiddish neophytes might imagine — it’s accepted meaning is “old guy,” though more literally, Kutzik says, it refers to a person who is incontinent. For your edification: “Alter Kaker” is singular, “Alte Kakers” is plural.

This is fitting — applauding her husband at a table surrounded by his collaborators, Catherine Zeta-Jones looked like the beautiful nurse at a hospice. Douglas is 74, his father is 102, and the “Kominsky Method” is about the comedy of aging, and focuses on Jewish men — Alan Arkin co-stars with Douglas in the Netflix original by fellow-Yid, “The Big Bang Theory” creator Chuck Lorre. Our only heartbreak is that, in winning the award, Douglas beat out the extremely Jewish and enjoyably Jew-y Sacha Baron Cohen.

A very specific corner of the internet had strong feelings about Douglas’ Yiddish:

Please no one try to make “Alter kockers rule!” a thing , Jews have enough to deal with right now #GoldenGIobes

michael douglas yelling “alter cockers rule!” like he’s auditioning to be the next catskills senior activities director on season 3 of maisel

“Alter kockers rule!” was more authentically Jewish than anything on Miss Maisel, I’ll give you that.