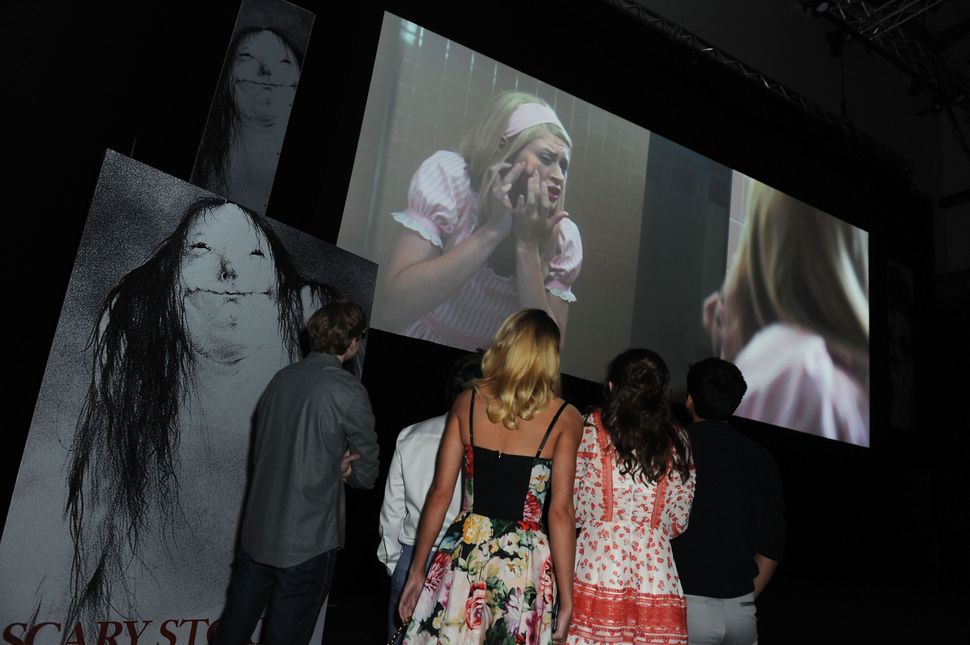 The cast of Scary Stories watches the trailer at “Scary Stories To Tell In The Dark” trailer launch and footage presentation on March 28, 2019 in Los Angeles, California. Image by Getty/Joshua Blanchard/Stringer

Page for page, there may be no more frightening children’s books than “Scary Stories to Tell in the Dark.”

The credit lies both with Schwartz and his collaborator Stephen Gammell, who illustrated the tales in the most horrific way imaginable, with tendrill-y, desiccated chiaroscuro figures that, years after reading, I still see when I blink. Given the visual provocation and narrative tenseness of the books, it was only a matter of time before Schwartz’s stories made the jump to the big screen. Director André Øvredal and producer Guillermo Del Toro have adapted the series into a forthcoming film, and based off a new trailer, the movie appears primed to live up to Gammell and Schwartz’s mix of ghastly imagery and deranged storytelling.

Harold, the human scarecrow of the books is here, looking more Elephant Man-esque than ever. The corpse from “The Big Toe,” searching for its missing digit? Present and accounted for. That lady in “The Red Spot” who found a spider infestation in her face, putting you off of popping zits forever? She’s in the mix too.

I never read these stories as prescribed (in the dark) and I’m not sure I’m ready to encounter them that way. I may have to wait for this film’s streaming release so I can control the lighting myself.