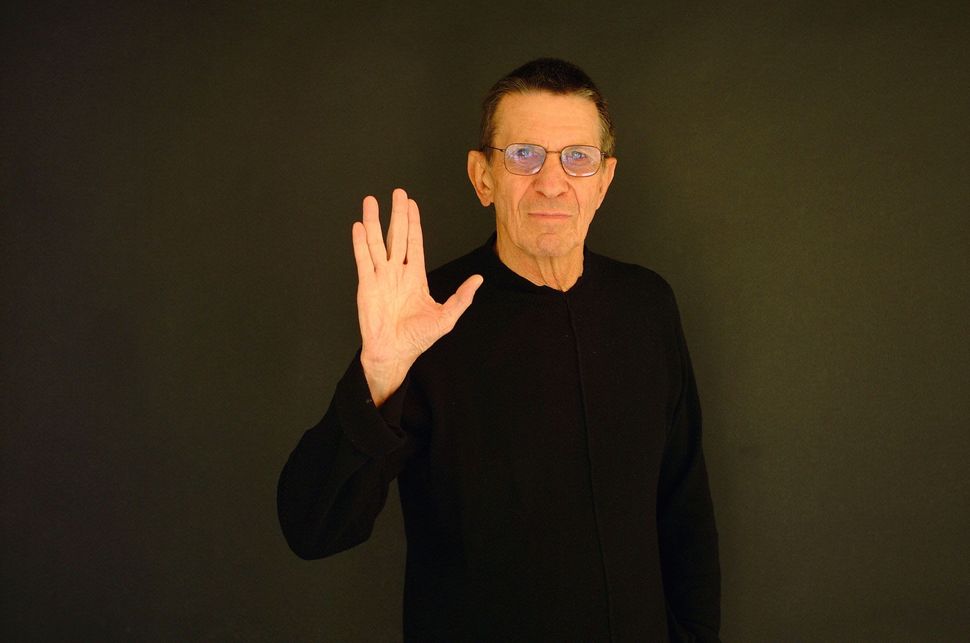 No handshakes. No Italian abbracci (hugs) and certainly no French bises (kisses on the cheek). Be sure to keep your distance from others. As the novel coronavirus continues ravaging the planet, actor George Takei, who rose to fame playing Sulu on “Star Trek,” has an idea for an acceptable greeting that won’t spread the deadly disease: Spock’s germ-free “Live Long and Prosper” gesture.

Nimoy was inspired to create the now famous V-shaped salute by his Jewish upbringing in Boston. I got to meet the famed actor in 1997 when he was a guest on my radio program and shared the origins of the now famous symbol, first seen in the “Star Trek” episode “Amok Time.”

“I still have a vivid memory of the first time I saw the use of the split fingered hand being extended to the congregation in blessing,” he told me. “I was entranced. I learned to do it simply because it seemed so magical.”

“I don’t claim Spock is a member of the lost tribe of the Israelites, but there are values in ‘Star Trek,’ which I felt comfortable with because they are values that I grew up with as a child,” he said. “This doesn’t mean that these are exclusively Jewish values, but they are values that are reflected in Judaism like social justice, professionalism, responsibility, mutual support of colleagues and friends in relationships, and meritocracy; values that are still important to me.”

In person, Nimoy seemed as intelligent as his half-Vulcan alter ego, and was certainly more emotional than his larger than life film character, but his constant self-analysis was remarkably reminiscent of Spock’s. On television, Nimoy’s Spock was the brilliant altruist. Off-screen, he was the rare celebrity who fully embraced his Jewish upbringing.

“Spock is a classic Diaspora character,” he said. “A person who is a stranger in someone else’s territory, a misfit, a loner. He is not totally at home on Vulcan because of his human side, and he isn’t at home on the Enterprise because he looks and acts like a Vulcan. I have felt that sort of alienation myself.”

Nimoy grew up in a Russian-Jewish family where Yiddish was spoken at home. However, that home was in predominantly Catholic Boston. “It was clear to me that I was not a member of the majority,” Nimoy said. “I was not like everybody else, and I think it was very useful to me in the development of the Spock character.”

While Nimoy pointed out the many Jewish philosophical undertones to the Spock character, “Live Long and Prosper” hand-gesture is the only overtly Jewish reference in all of “Star Trek.”

During my interview with Nimoy, he seemed surprised at the enduring popularity of the Spock character. “All the time, people come up to me and tell me, ‘I became a teacher because of you,’ or ‘I became a scientist because of you,’ even though I am neither, I’m just an actor.” He was, however, much more than that. Spock symbolized the ideal human, the immigrant experience and the idea that nerdiness could be sexy.

Now, perhaps he has one other legacy. As our planet is in the grips of a deadly virus, in need of a way to stay positive and greet each other without spreading the infection, let’s all make that V-shaped sign. Live long and prosper.

Dan Rosenberg is a journalist and music producer based in Toronto, Canada. He has traveled to over 40 countries across the globe reporting on music and culture for The Rough Guides, Afropop Worldwide, CBC Radio, The Times (UK) and Toronto’s ClassicalFM.