On the border of Turkey and Syria, a Jewish family desperate to flee a rapidly-changing world 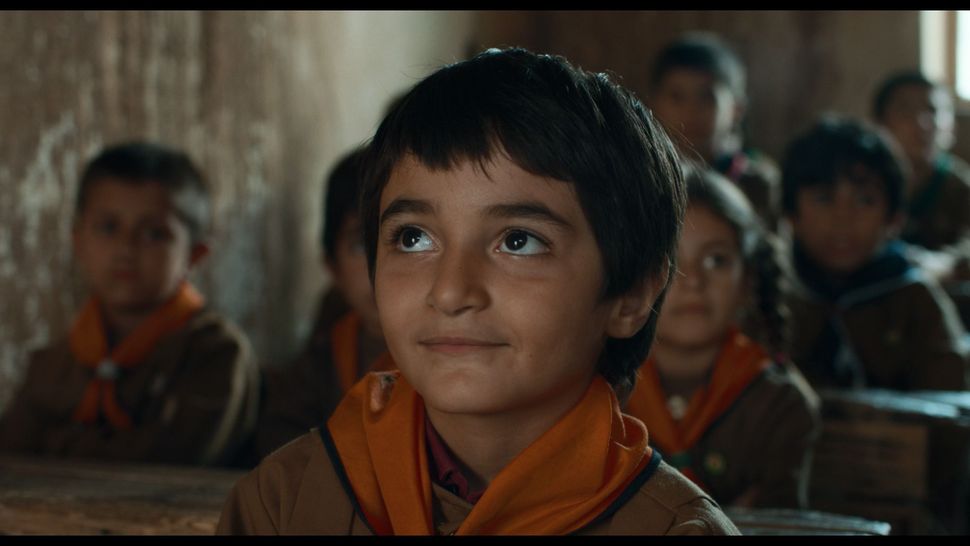 Child’s-Eye View: The central figure of Mano Khalil’s “Neighbours” is six-year-old Sero (Serhed Khalil) and the story is seen through his trusting and innocent eyes. Courtesy of Menamesha Films

Swiss-Kurdish director Mano Khalil’s “Neighbours” is a cinematically stunning, deeply unsettling film that is at once brutal and satiric, and at moments even magical. The central figure is six-year-old Sero (Serhed Khalil) and the story is seen through his trusting and innocent eyes. Loosely inspired by the director’s own childhood experiences, the movie, with its vivid crosscurrents and unlikely juxtapositions, brings Fellini to mind.

The narrative is bookended in a Syrian refugee camp where a Kurdish family has fled the country’s violence and is awaiting word from someone whom they’ve contacted. We don’t know who the person is, though a response arrives in the form of a child’s drawing displaying two stick figures at the bottom of the page and an array of colorful balloons at the top.

This image may be evocatively ambiguous to the viewer, but has great resonance for the father (Sherzad Abdulla) whose 40-year-old memories surface. It brings him back to his native village on the border of Turkey and Syria where he and his beloved prankster uncle Uncle Aram (Ismail Zagros), taunt border guards by floating dozens of red, yellow and green balloons, the national colors of the Syrian Kurds. The Kurds are a wretchedly oppressed minority throughout the Mideast.

The memory play opens in the late 70s or early 80s with Sero enjoying an almost idyllic childhood hanging out with his uncle and playing with his friends in his village flanked by expanses of sun-baked desert. Among his close confidantes, there’s a neighboring Jewish family with whom his parents have enjoyed a long-term friendship. Sero serves as their “Shabbos Goy,” lighting their Sabbath candles. They in turn give him cakes. Their 30-year-old daughter Hannah (Uygurlar Derya) and Sero’s Uncle Aram are drawn to each other, though it’s a mutual attraction with no future. The cultural chasms are too deep, and fascistic forces are encroaching.

At one time there were other Jews in the community, but they have long since escaped. The remaining Jewish family would like to get out too but Hafez Al-Assad’s dictatorial Baathist government won’t give them passports or indeed even recognize Jews as citizens. Of course Sero has no knowledge of any of this. He has his sights set on starting school and obtaining a television so he can watch cartoons as the town eagerly awaits the arrival of electricity. They’re also awaiting the arrival of a new school teacher, Wahid Hanouf (Jalal Al Tawil). 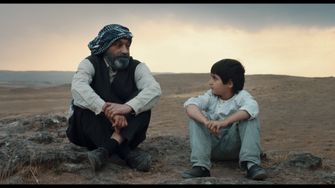 Generational Dialogue: Mano Khalil’s “Neighbours” is a cinematically stunning, deeply unsettling film that is at once brutal and satiric. Courtesy of Menamesha Films

The latter, Sero’s first grade teacher, turns out to be an authoritarian admirer of Assad and a full-fledged Arab nationalist overflowing with antisemitic and anti-Israeli ideologies. Indoctrinating the children with these ideas is central to his pedagogical mission. When they don’t precisely parrot his views he brutally beats their hands with a stick. His first order of business is demanding that the kids speak only Arabic in school, which paves the way for his screeds on Israel and Jews that include accusations of “blood libel.”

The teacher creates an anti-Imperialist, anti-Israel play for his class to perform where each child, cast as a Middle Eastern or African country, is called upon to stab a Jew in effigy. A knife is passed from student to student; most, save for Sero who has no ill-will toward Jews, approach their roles with enthusiasm, slicing, dicing, and ultimately decapitating the rag doll.

But Wahid’s politics are metastasizing. Cruelty and corruption are everywhere, especially among the bureaucrats and border guards who expect payoffs for permits, passports, virtually anything, their palms extended at every turn.

The drama grows even darker when Uncle Aram is arrested by the secret police and savagely beaten and Sero’s mother is killed by soldiers, an act which may or may not have been accidental.

In one of the most difficult scenes to watch, the Jewish family patriarch begs Sero’s father to help Hannah escape by allowing her to use his dead wife’s papers. The request is understandable, but fraught with moral ambivalence. After all, he is exploiting a personal tragedy. But in an act of extraordinary kindness and bravery Sero’s dad, at great personal risk, allows his deceased spouse’s documents to be altered in order to help his neighbors. 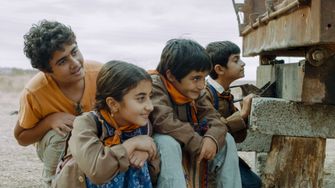 I Remember: In its evocation of childhood memories, ‘Neighbours’ recalls the work of Fellini. Courtesy of Menamesha Films

In many ways, this is a classic story of an evil outsider infiltrating a community that still maintains a core of goodness. That said, it is not an Edenic world; the cracks from within are present, arguably becoming more pronounced thanks to outside forces that have brought barbarism to the surface. For example, one of Sero’s uncles is a Neanderthal wife-beater, blaming his wife for not getting pregnant when in fact the fault is his. Later, as he is afflicted with throat cancer, the blood that trickles out of his mouth is a nice metaphor for the pervasive moral decay. Even more pointedly, the growing villainy can be seen in a group of children who stab a cat to death. Their playacting with the effigy has invaded their collective psyches.

A touch of parody is also present. The vicious school teacher is as much of a clown as he is a thug. Puffed up and strutting about, he insists that the townspeople will show up in mass for a dinner he is hosting to honor Assad. No one comes. Even more disappointing, he is determined to grow a palm tree and has one imported and planted into the arid land. In short order, it dies. He is a despot, but he’s also an imbecile.

The townspeople function almost as a silent Greek chorus made up of professional and non-professional actors. They are an extraordinary presence, their faces weather beaten and expressive. They embody a quiet dignity, even elegance especially compared with the tyranny and buffoonery all around them. The acting throughout is impressive though the film clearly belongs to Serhed Khalil and his sweet and genial nature. At the end he gets his TV, but instead of the cartoons he was so looking forward to, he stares glassy-eyed at one gruesome news story after another.

Though “Neighbours” is long, at times overstated, and its conclusion is pat and implausible, there’s much to admire here; the film’s powerful imagery lingers long after the credits have rolled.

On the border of Turkey and Syria, a Jewish family desperate to flee a rapidly-changing world