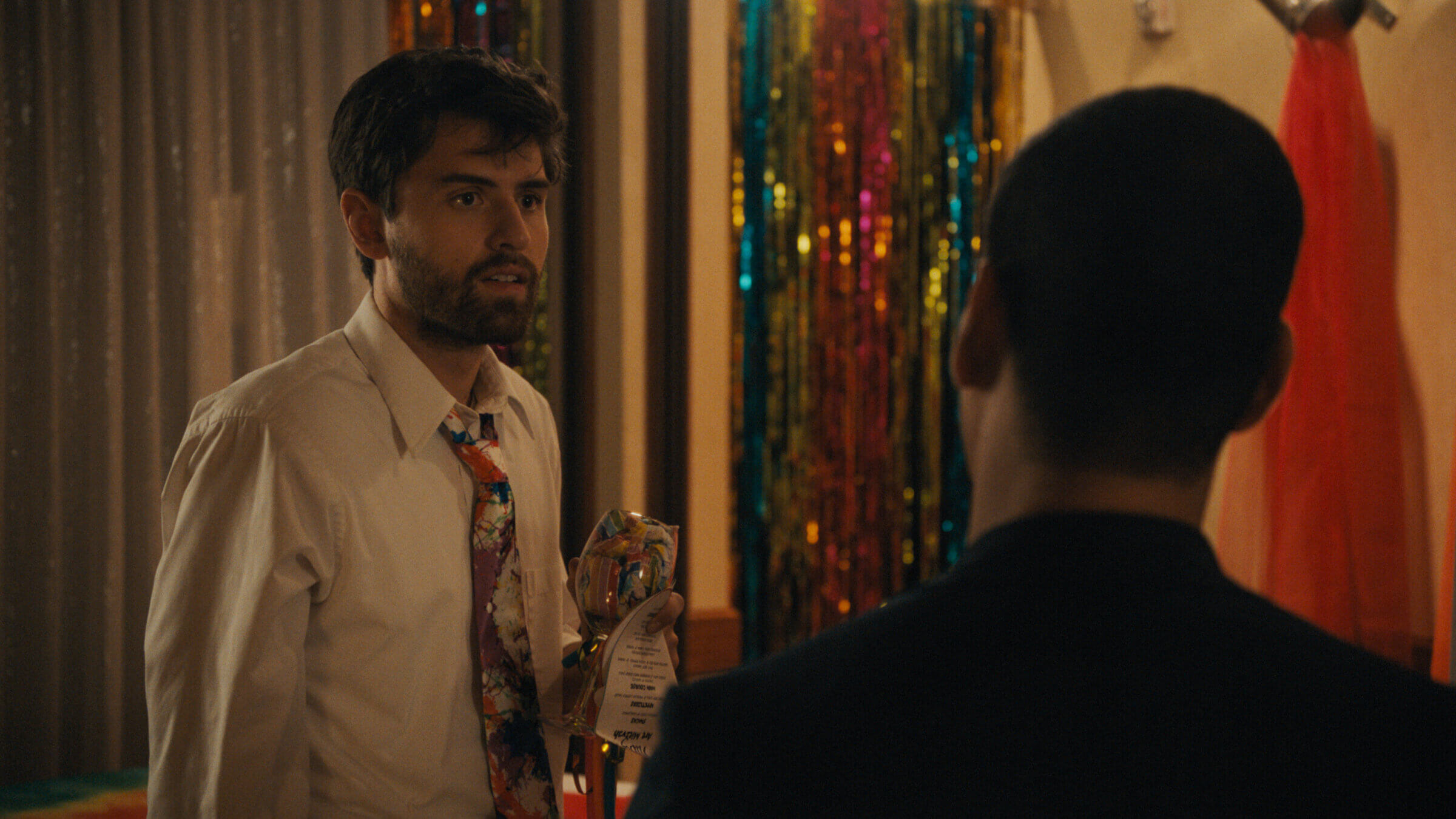 At the end of an art-themed bar mitzvah party, the emcee debriefs with some non-Jewish guests.

“Wasn’t it extra beautiful today?” asks Andrew, a 22-year-old recent college grad, as he picks party favors off the ground.

“Same,” Andrew says. And then they chat a bit about how the family was sweet and the parents were “literally to die for.”

The pleasantness of this reception is noteworthy for “Cha Cha Real Smooth,” now streaming on AppleTV+. Elsewhere in the film, Jewish mothers, fathers and their kids are rarely so agreeable. The scene is important for another reason too: It establishes that the main characters aren’t Jewish, but misfits in a Jewish milieu of b’nai mitzvah season. But rather than offer some non-Jewish insight into this world, the film mostly reinforces the same shopworn stereotypes Jews can generate themselves. This occasional “envy” can be taken as at best ethnographic and, at worst, offensive.

Directed, written and starring Cooper Raiff, the dramedy sold for a record bid at Sundance and is now something of a critical darling. I liked it too — but only when overlooking most of the Jewish parts.

By way of plot: The film starts when Raiff’s Andrew tags along with his teenage brother to a bat mitzvah and walks away with job offers from moms eager to have a hype man at their kids’ parties. While there, Andrew also meets Domino (Dakota Johnson) and gets a side gig babysitting for her autistic daughter, Lola (Vanessa Burghardt) – naturally, Domino and Andrew’s relationship gets complicated.

The film positions Andrew, Domino and Lola as outsiders and the Jews as insiders, with their own gossip, offscreen ritual and efforts to outspend other families in lavish rites of passage themed around sports or social media. Andrew’s occasional antagonists are mothers who pearl-clutch when he’s playful with the rabbi or sip wine while sniping at women they suspect of having affairs with their husbands. One of the only featured dads defends his jerkish child — with his fists.

Such people certainly exist on the bar/bat mitzvah circuit, but it’s not always comfortable to watch a non-Jew bring them to life.

There is a thematic reason for the Jewish backdrop. Andrew is learning to become a man and overcome a post-college plateau. It’s a shame that Raiff had to include in this effort a fling with Andrew’s shallowly rendered Jewish former classmate (Israeli actress Odeya Rush as Macy), a lover of lashon hara who, unprompted, in the aftermath of a hookup, says she was never attracted to him in high school. Macy’s meant to be sympathetic, but she checks too many Jewish-American Princess boxes to be an unproblematic proxy for the chosen people.

These caveats aside, Raiff, who was inspired by his own bar mitzvah-hopping when he was a kid in Dallas, gives us something I don’t ever remember seeing in a bar mitzvah scene: motzi and kiddush. Though, in the case of the latter, we just hear the voice of a geriatric rabbi as the camera lingers on Andrew, Domino and Lola, looking bored. It’s hard to know why that’s there, why the blessing isn’t shown or what exactly Raiff means to convey. He remains standing till the amen, not knowing what else to do with himself. Perhaps that listlessness is the point.

The film’s purely incidental interest in Jewishness is disappointing, in that it took great care to get the character of Lola right, casting an actress on the autism spectrum and consulting with a disability rights nonprofit, RespectAbility. The score was co-written by Este Haim, and Jewish actors Brad Garrett and Leslie Mann play Andrew’s stepfather and mother, but none of these collaborators alone could deliver the nuance or potential beauty of the rite.

That’s saved for the one scene, at the art-themed bar mitzvah with the “to-die-for” parents. The function is treated like the ultimate outlier in a world of exhausting, vapid, pubescent dance parties.

And in its way, that’s true. B’nai mitzvah in wealthy suburbs are often garish affairs with airbrushed T-shirts, spoiled teens boasting about perfunctory volunteer projects and no small amount of cruelty for kids who don’t fit in.

Raiff could be said, in a film with so much bracing honestly and so many flawed, indecisive characters, to be a gifted observer of the human condition. But some truths aren’t universal – some are simply Jewish, and are best left to Jews.