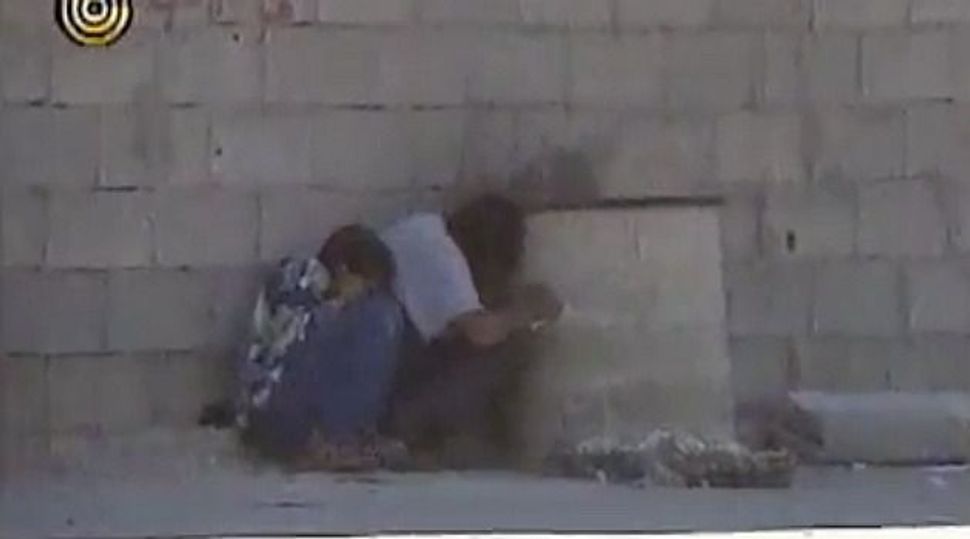 Questions Swirl: A Palestinian father and son were shown in this video coming under fire in Gaza in 2000. But was the boy actually shot and killed? Image by youtube

The panel of experts made the statement in its 36-page report presented Sunday — Israel’s most comprehensive official response to a disputed video shot by a French television station.

According to the report, “there are many signs” that the boy wasn’t even shot.

Israeli Prime Minister Benjamin Netanyahu had tasked the committee last year to look into “the al-Dura affair.” France 2 said the video, which aired on Sept. 30, 2000, showed al-Dura being killed by Israeli soldiers. The video became the emblematic image of the second intifada, and sparked anti-Israel riots and attacks on Israeli and Jews across the world.

Narrated by France 2 reporter Charles Enderlin, the 55-second video shows a boy and a man, later identified as Jalal al-Dura and his son, Mohammed, crouching behind a barrel, supposedly under gunfire near Netzarim in the Gaza Strip. Enderlin said in his narration that the fire “came from the Israeli position” and that the boy was shot dead.

But the Israeli committee in its report said “there are many signs” that the man and the boy “were not hit by bullets at all.” Unaired raw footage showed “the boy was alive” when the France 2 camera stopped recording, according to the report, which also cited the lack of blood stains at the scene, among other findings.

Among other experts, the report contains testimonies by Dr. Ricardo Nachman, deputy director of Israel’s National Center of Forensic Medicine in Tel Aviv, and Yehuda David, a French-Israeli physician who claimed that scars presented by Jalal al-Dura as evidence of Israeli violence in 2000 actually had been incurred eight years earlier at the hands of Hamas.

“Question marks exist about almost every aspect of the France 2 report, and many conflicting and false statements have emerged in the testimony of local cameraman of the station, Talal abu-Rahma, who is the main and virtually sole source of the France 2 reportage,” the committee’s report said.

The report said France 2 “should have retracted its unequivocal statements that the boy was targeted by Israeli fire and that the film shows his death and apologize for the misleading editing, as well as clarify that the station relied exclusively of its Gaza reporter.”

Since the video’s release, experts from at least four countries have disputed its veracity, including Philippe Karsenty, a media analyst and the Jewish deputy mayor of the Paris suburb of Neuilly-sur-Seine, who called the video a hoax.

Enderlin has sued Karsenty for libel, and the latest ruling in their protracted legal fight is expected to be announced this week.

“The ruling has already been handed down, so the Israeli report will not influence the ruling one way or another,” Karsenty, who for years has urged Israel to unambiguously and officially call the video a hoax, told JTA. “Still, it is not too late because the bigger picture is that we are fighting for the truth.”

Israel initially assumed responsibility for the incident, but a later military probe found any bullets likely came from Palestinian gunmen who exchanged fire with Israeli soldiers on the day al-Dura was allegedly shot.

Upon receiving the report, Yuval Steinitz, Israel’s minister of intelligence, international relations and strategic affairs, said the video was “a blood libel against the State of Israel. The report on French television was false.”

And Netanyahu said that “focusing on this case is important” because “it exemplifies the mendacious campaign of delegitimization we keep experiencing against Israel.”