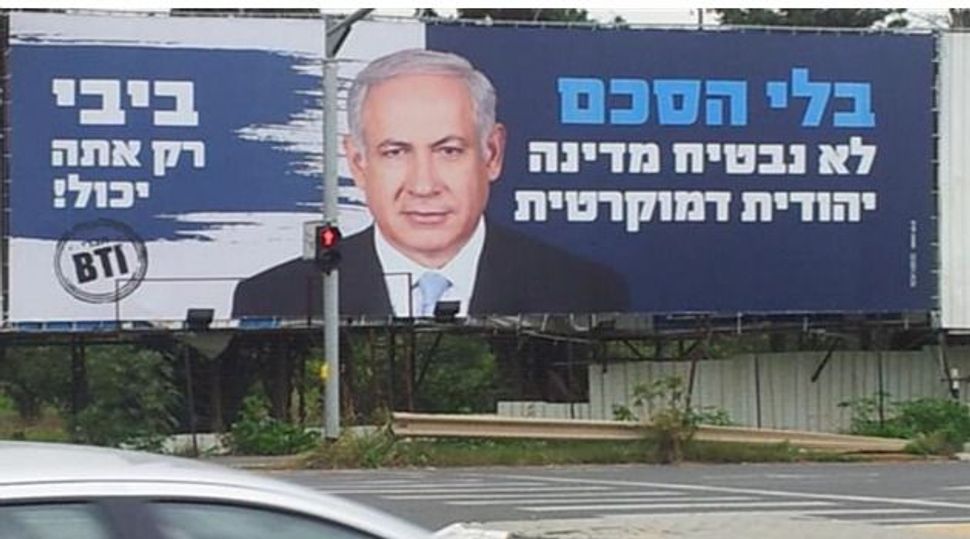 Give Peace a Chance: A billboard sponsored by a business group urges Israeli Prime Minister Benjamin Netanyahu to forge a peace deal with the Palestinians.

The latest coalition of Israelis and Palestinians hoping to affect the settlement of the conflict is not your usual bunch of peace activists. They are wealthy businesspeople who work in a broad range of sectors, from construction to high-tech. They don’t need to struggle to be heard in the halls of power — they already have the ears of everyone from Israel’s prime minister to the leaders of Hamas.

Breaking the Impasse, which was established in 2012 but only took on a public role last year, is far from typical. The initiator on the Israeli side, Yossi Vardi, a founding father of his country’s high-tech industry, has remarked that the coalition, which meets monthly in Tel Aviv (with the 120 Palestinians in the group coming from the West Bank and Jerusalem), is “not a monolithic group of hallucinating people from the left.”

BTI is using its members’ influence to apply quiet pressure on government officials and its wealth to try and galvanize a lethargic public behind the peace process. “Without an agreement we can’t promise a Jewish and democratic state,” declared hundreds of billboards posted across Israel for much of February, referring to the fear that without a peace deal Palestinians could soon outnumber Jews in territory currently under Israeli control. There was a picture of Prime Minister Benjamin Netanyahu and a message that he has the power to prevent this doomsday scenario: “Bibi, only you can.”

Dan Soffer, an Israeli member of the group and vice president of business development at the payment technology company VeriFone, suggested to the Forward that BTI’s 300 members control more than a fifth of the GDP in Israel and the Palestinian territories. His colleagues in the organization come from some of the biggest companies in Israel: Gad Propper, for one, is CEO of food giant Osem International/Nestle Purina Israel.

Other BTI members include the Israeli supermarket mogul and Likud supporter Rami Levy, whose eponymous chain of supermarkets has branches in the Israeli-occupied West Bank, and Munib Masri — a confidant of the late Palestinian leader Yasser Arafat — who believes in boycotting not only settlement enterprises like Levy’s, but all Israeli businesses. “In general as long as I’m occupied by Israel I will not buy Israeli goods,” said Masri, the world’s richest Palestinian and BTI’s initiator on the Palestinian side, in an interview with the Forward.

There are precedents for the conviction that a resolutely non-ideological, notably unsentimental group of businesspeople can alter their country’s direction. Many BTI members say that, while they are not likening Israel to South Africa or accusing the Jewish state of apartheid, there are lessons from history about the role a business community can play.

“There are several examples in which the business community took a role in resolving the conflict,” said BTI member Yadin Kaufmann, a venture capitalist. “South Africa is one, Northern Ireland is another — and I’m not drawing a parallel between one place and another.” In September 1985, 91 leading businesspeople in South Africa published newspaper ads calling for the end of apartheid.

Masri has an open door to the Western-backed Palestinian Authority and also to the figures who are widely considered potential spoilers of a peace agreement — the leaders of the Hamas regime in Gaza, including its Prime Minister Ismail Haniyeh.

Does he use this access to bring the regime around to a two-state solution? “I’m trying my best [to ensure that], if our aspirations for independence are met, Hamas will follow,” he said, adding: “In 1988 the Palestinian Liberation Organization recognized the State of Israel, and it’s up to Hamas to accept the same.”

BTI is different from other nongovernmental Israeli-Palestinian peace groups, such as the Geneva Initiative, because it doesn’t get involved in the specifics of what an agreement should look like. Its members say it is there to support the negotiation process and to campaign for yes votes in the referendums that governments on both sides have promised before finalizing an agreement. “We don’t get into the details — they are for the elected officials to deal with, which is why they are elected,” said Aviram Sela, a member of the group’s organizing team.

The economics of the occupation have come into the spotlight in recent weeks. When SodaStream, a company based in the West Bank that produces home seltzer makers, signed Scarlett Johansson as star of its ads ahead of the February 2 Super Bowl, it spurred loud claims from some that this company and others profit from the occupation. On February 1, U.S. Secretary of State John Kerry warned that there is “talk of boycotts and other kinds of things,” and asked: “Are we all going to be better with all of that?”

A few days earlier Israeli Minister of Finance Yair Lapid warned that if peace talks fail, actions by Europe could have a major impact on Israel. “Every resident of Israel will get hit straight in the pocket,” he said. “The cost of living will rise, the education, health, welfare and defense budgets will be cut and many international markets will be closed to us.”

The Israeli BTI members, too, are concerned about boycotts (though resigned to the fact that some Palestinian BTI members support them) and view successful negotiations as a way to neuter the threat. “Everything should be by negotiations, not boycotts,” said Avi Nudelman, a business consultant and former senior Israel Defense Forces officer in the West Bank. But they are keen to focus on the economic pluses of an agreement over the economic dangers of not reaching one.

In addition to the billboards questioning Israel’s future as a Jewish state, another BTI campaign focused on the frustrations about the cost of living in Israel raised during the 2011 social protests. “Without an agreement we will not be able to lower the high cost of living,” these ads declared, ending by saying that the matter is in Netanyahu’s hands.

“I don’t think it will happen overnight, but over time an agreement is important so that resources can be reallocated from defense, security and settlement building to other social uses that will influence the cost of living in Israeli society,” said Kaufmann, founding partner of Veritas Venture Partners. He also believes that an agreement will open new doors for Israeli business.

But despite the big names, big bucks and big vision, BTI has left some observers underwhelmed. Haifa University professor Daniel Gutwein, an expert on Israeli society and its economic elite, commented to the Forward: “Israel should move towards a two-state solution, but it’s doubtful whether these businessmen can help it.”

Gutwein believes that the BTI message is particularly unpalatable because it claims that a peace deal is needed to bring down living costs, but the public may blame business for high prices.

Riman Barakat, a Palestinian who attended BTI meetings throughout 2013, fears that what the businesspeople claim as their strength — the fact that they leave details of the agreements they would like to see intentionally vague — may cause it to lose momentum. “There was a buzz but I’m not sure how long that is going to continue,” said Barakat.