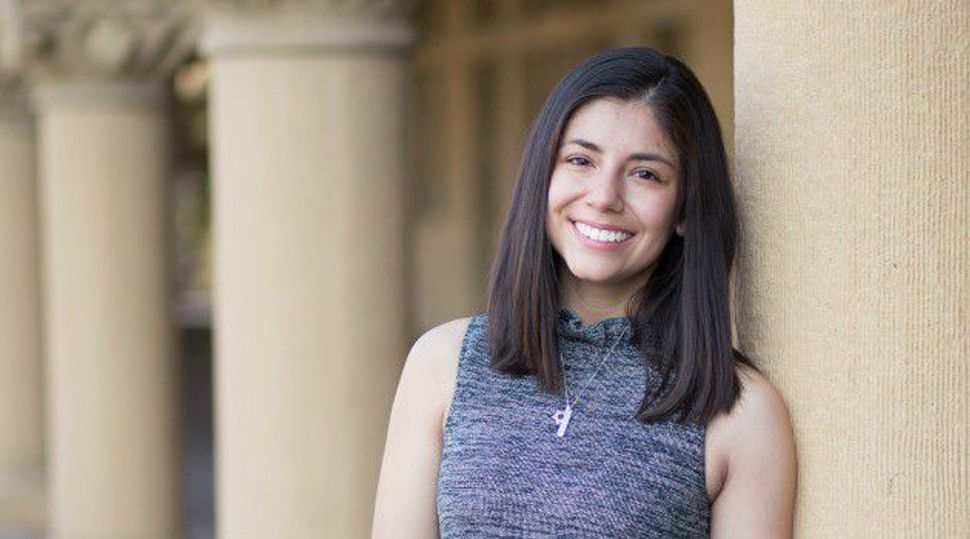 (j weekly via JTA) — A junior at Stanford University who is running for the student senate says she faced anti-Semitic questioning from a student group whose endorsement she was seeking.

During a March 13 interview in front of eight members of the university’s Students of Color Coalition, Molly Horwitz, 21, alleges that the lead interviewer asked, “Given your strong Jewish identity, how would you vote on divestment?”

“SOCC is a pretty major influential group on campus,” said Miriam Pollock, Horwitz’s friend and campaign manager. “Their endorsement is the most influential.”

To secure the interview, the Paraguay-born Horwitz had submitted a written application to the student group in which she discussed reconciling her identity as both a Latina and a Jew. As she later recounted to Stanford campus newspapers, the Anti-Defamation League and Stanford officials, she felt the question about her Jewish identity was over the line.

“It is not OK that they brought my Jewish identity into this and implied it might impact my decision-making ability,” Horwitz said in an email to the J. weekly. “I interpreted the question as anti-Semitic.”

In an op-ed published April 13 in the Stanford Daily, in addition to asking for an SOCC apology, Horwitz wrote, “The rest of the interview was a blur to me. I barely kept it together. As soon as I left the interview room I began shaking and hyperventilating. I replayed the incident over and over in my mind.”

However, in a counterpoint op-ed also published April 13 in the Stanford Daily, the SOCC flatly denied bringing up Horwitz’s Jewish identity in regard to its question about Israel divestment, calling the allegations of religious bias “false.”

SOCC did ask the candidates about divestment, an issue that has roiled Stanford’s campus since the student senate passed a non-binding resolution in February calling for Stanford to divest from companies it says violate international humanitarian law in Israel and the Palestinian territories. But the panelist’s question to Horwitz was not tied to religious identity and was not meant to be a litmus test on the issue, SOCC said in its op-ed. Rather, the op-ed writers insisted, the question was intended to probe how candidates would reach out to diverse groups on campus and how they would handle important matters.

“Religious discrimination, like any form of discrimination, starkly violates the values on which the Students of Color Coalition is based,” the op-ed stated. “Were these allegations true, they would not only merit a public apology but also constitute a betrayal of both the communities SOCC represents and the ideas the coalition members promise to uphold.”

Horwitz said that when she heard the question, she asked for clarification, then explained that she opposed divestment but that the student senate’s process had been fair. Horwitz had been involved in the anti-divestment campaign on campus, though it wasn’t a part of her student senate campaign platform. She said it would have been fair for SOCC to ask her about divestment if they hadn’t tied it to her Jewish identity.

“I saw it as calling into question my ability to serve the interests of the student body as a senator simply because I am Jewish,” Horwitz said in an email. She did not get SOCC’s endorsement.

After consulting with Hillel at Stanford Rabbi Serena Eisenberg, Horwitz eventually brought her story to the Stanford Review, a student publication that published a lengthy account of the story on April 12.

“We’ve seen this now on a number of campuses … [Jewish students] feeling like their Jewish identity is being called into question in terms of their ability to serve on various student bodies and to be impartial representatives,” said Vlad Khaykin, associate regional director of the ADL’s San Francisco-based Central Pacific Region, who has worked with Horwitz since she contacted the organization two days after the incident.

The fallout from the Stanford incident is similar to what UCLA student Rachel Beyda of Cupertino, Calif., experienced in March, several weeks after a panel interviewing her for a position on a student judicial board asked her how she could remain unbiased given her involvement in the campus Jewish community.

The Beyda incident was covered by a multitude of media, including The New York Times, and now it’s Horwitz’s turn. On April 14, the Times wrote a lengthy piece headlined “Student Coalition at Stanford Confronts Allegations of Anti-Semitism.”

The piece reports that Horwitz, who is from Milwaukee, Wisconsin, had written several Facebook posts against divestment earlier this year, but that before she launched her campaign, she and Pollock “scrubbed her Facebook page to hide all posts indicating support for Israel, including a photograph of a pair of shoes decorated to look like the Israeli flag.”

Pollock told the Times that this was done “not because she isn’t proud — she is, but [because] the campus climate has been pretty hostile.”

Said Eisenberg: “We’re deeply troubled by the increasingly blurred lines between the political objectives of the BDS [boycott, divestment and sanctions] movement on campus and the increasing vitriol and pervasive divisiveness.”

On April 14, the Stanford Board of Trustees issued a statement saying it would “not be taking action on” the student senate resolution calling for divestment on the grounds that “the university’s mission and its responsibility to support and encourage diverse opinions would be compromised by endorsing an institutional position on either side of an issue as complex as the Israel-Palestine conflict.”

The ADL sent a letter to Stanford associate dean Nanci Howe expressing concern about the SOCC-Horwitz incident. The university is in the process of reviewing the complaint, according to Lisa Lapin, associate vice president for university communications.

In the meantime, Horwitz is on the ballot for the Associated Students of Stanford University undergraduate senate and polls were scheduled to open April 16. Horwitz said she decided to run to improve mental health services on campus; as a resident assistant, she had encountered students who struggled to get the services they need.