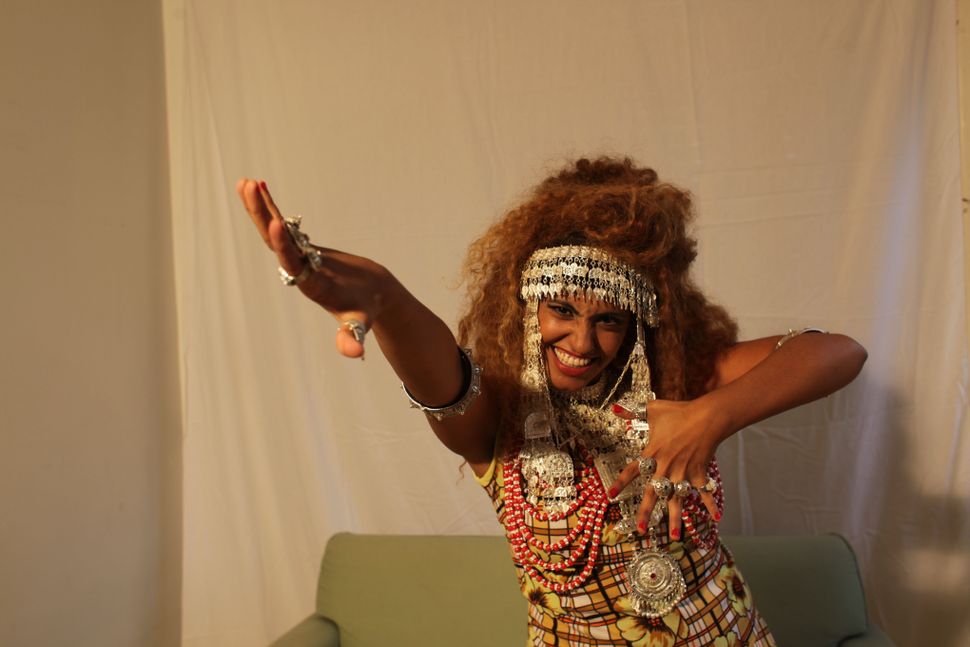 On the cover of Riff Cohen’s 2012 album, “A Paris,” there is a picture of her grandmother at age 14, wearing braids and a scowl. A teenage bride, her grandmother had taken the passport photo for her move from Djerba, Tunisia, to Israel. The image holds sentimental value for Cohen, but she also chose it for another reason: “It’s a very rock ’n’ roll face.”

Cohen is one of several Israeli women musicians who are looking to their grandparents to make music for today’s generation. Of Mizrahi, or Jewish Arab, heritage, they eschew Hebrew in favor of their grandparents’ first languages and cultural sensibilities, singing in Jewish Arabic dialects, and in Persian and French. The fact that most of their Israeli Jewish fans can’t understand them doesn’t seem to matter. In fact, singing in these heritage languages propelled their careers in Israel and beyond.

Cohen, of Tunisian and French Algerian parentage, broke through with the title song on “A Paris.” The upbeat hit, like most of her music, is based on her mother’s French poetry, with North African and Berberian influences. Cohen said the music speaks to immigrant Paris. But it also resonates in Cohen’s native Israel. After “A Paris” debuted in Israel, Cohen said, she received notes from Israeli fans whose children demanded to hear the song before they went to school in the morning.

Singers like Cohen embody a larger shift in Israeli society. Their grandparents arrived to Israel forging a national culture based on the European Jewish identities of the country’s founders. Ashkenazi culture dominated in music and art, crowding out Mizrahi expression, as Eastern music was relegated to family gatherings or religious practice. Now, Israeli artists are plucking lyrics and tunes out of obscurity, and playfully remixing them to international renown.

In some ways, this is the Mizrahi version of an old story. In the 1990s, America saw a Yiddish music revival carried out by the grandchildren of Eastern European immigrants. Unburdened by the weight of assimilation, the third generation feels freer to turn back to distant homelands for inspiration. What’s different about the new wave of Israeli music, however, is that it encapsulates so many different countries and cultures of origin in the Mizrahi community, making it difficult to neatly categorize.

“You have a situation where you have got an immigrant generation, then a generation that is dedicated to fitting in, and then the third generation returns to the roots,” said Abbie Wood, an ethnomusicologist at University of Haifa.

With a few exceptions — like Dudu Tassa, who performs in Iraqi Arabic, and Ravid Kahalani, who sings in a Yemenite Jewish Arabic dialect — women are dominating this new scene. There’s a good reason for that. While men in traditional Arab Jewish societies sang in prayer settings, women sang in communal secular settings, creating tunes about love and domestic life. These songs are more easily melded into modern styles.

A-Wa, a trio of sisters, created its first album, “Habib Galbi,” based on the songs of their female ancestors from Yemen. “Since they didn’t know how to read and write, they couldn’t participate in synagogue services with men,” said Tair Haim, the lead singer. “They had to create a separate cultural world, and they created these songs as an outlet for their emotions.”

Originally from the desert town of Shaharut in southern Israel, the A-Wa sisters combine Yemenite Jewish tunes with hip-hop and electronic beats. They take a similar tack with their clothing, layering traditional Middle Eastern garments with sneakers and baseball caps. At their shows, the sisters command a dance hall atmosphere, punctuating their effervescent Arabic songs with Hebrew stage banter.

Mizrahi musicians who sing in Arabic are, intentionally or not, engaging in a subversive act. For a portion of the Israeli public, Arabic music is considered “enemy music,” said Hagai Uzan, a music journalist for the Israeli news site Walla.

But Israelis are also hungry for Arabic music. Though major Mizrahi stars like Sarit Hadad and Eyal Golan sing mainly in Hebrew, their songs are influenced by the pop idols of the Arab world, like Nancy Ajram and Sherine Abdel Wahab, Uzan said. The Israeli musicians singing in Persian, French and Arabic are less pop-oriented and haven’t quite pierced the Israeli mainstream, even though they are still getting time on Israeli radio.

“The music is bigger than words,” Uzan said. “We don’t have to understand the words to love it.”

Neta Elkayam, a musician of Moroccan heritage who sings in Arabic, said that her childhood in the Southern Israeli town of Netivot was filled with Arabic slang and music. Yet she never took the language seriously, learning in music school that “the story begins in the West and the story ends in the West.” Western music didn’t hold Elkayam’s interest, and she drifted into the visual arts.

Four years ago she stumbled onto the work of an Algerian Jewish musician and decided to perform one of her songs for her mother’s birthday. Elkayam uploaded a video of her singing to YouTube and was shocked by the adoring response. “Suddenly I figured that I pushed a button, which was waiting for someone to press it.”

Elkayam began researching Arabic Jewish music from the 1950s, seeking out records with the Moroccan style popular with her grandparents’ generation. She also began learning Arabic. “The music of the language, it was like a code for another world for me,” she said. She journeyed to Morocco on what she calls a “roots trip,” where she discovered another homeland. Now she has developed a distinct style, blending North African, Egyptian, Berberian and Mali tunes.

At a concert in a South Tel Aviv bar in November, an Elkayam performance had the feeling of an activist rally, attended by several Mizrahi poets and a founding member of the Israeli Black Panther movement who fought for Mizrahi rights in the 1970s. A Moroccan-Israeli friend lamented that his parents couldn’t join him for the show, for he believed they would have been moved by the Moroccan revival before their eyes.

Another musician, Shiran Karny, went through a similar research process for her music. She is the lead singer of Bint El Funk, a band that mixes Yemenite Arabic tunes with funk music and has been making the rounds of Israeli music festivals over the past couple of years.

Karny grew up in a religious Jewish household in Petah Tikvah and left at the age of 18, discovering her love of reggae music while living in a community of hippies in the Dead Sea area. She moved to Tel Aviv, where she became a reggae performer, but then she found her way to Jerusalem and the Yemenite music of her heritage at the Academy of Music and Dance, at The Hebrew University of Jerusalem.

Many of her songs are in Arabic, the fruit of a research process that involved meeting with elderly women in her Yemenite community to learn both the tunes and the lyrics. By far the most experimental of the new Israeli Jewish Arabic singers, she said that some Yemenite old timers have been confused by the repurposing of their songs.

But other old timers have become fans of this emerging genre. The A-Wa sisters’ grandmother had stopped speaking Arabic when she came to Israel in the 1940s. Now, her grandaughters’ music has reconnected her to the language — and the music.

“She cries when she hears our song on the radio or TV,” Haim said.