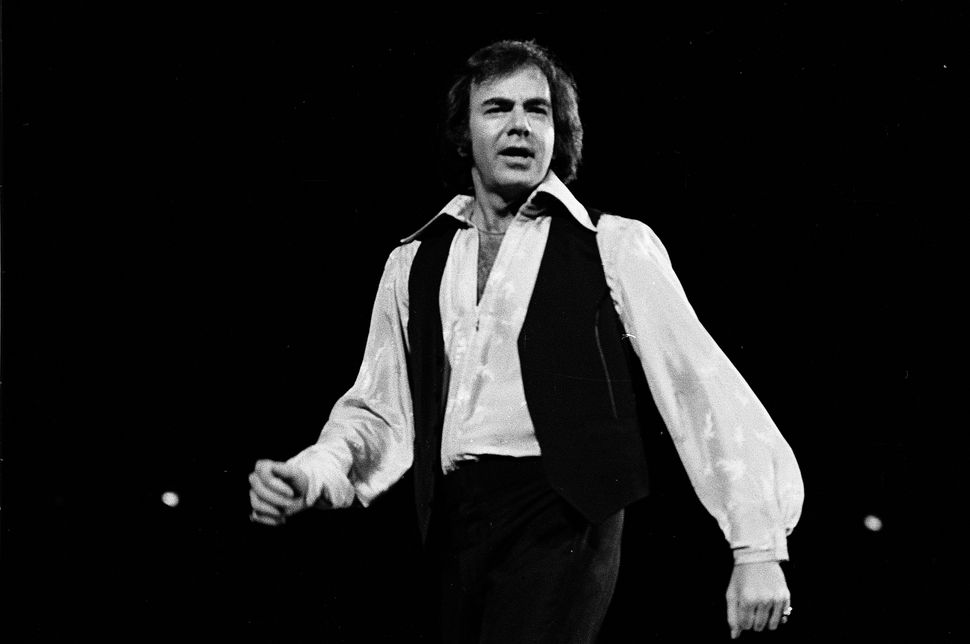 There are certain things in this life that I pretty much take for granted: Snow will fall in December. A new baseball season will begin in April. And if he’s not already touring somewhere as we speak, Neil Diamond will be going on tour again soon.

Which is why the announcement that the multi-platinum-selling singer-songwriter has abruptly retired from the road — after being diagnosed with Parkinson’s disease — comes as such a gut-punching surprise. As a human, I certainly feel concern for his health and well-being as he grapples with this degenerative disorder; but as a Neil Diamond fan, I’m also filled with immense sadness, realizing that we may never get to see him perform again.

Back in 1966, Diamond — who turns 77 on January 24 — took the stage in support of his first single, a brilliantly dark pop song called “Solitary Man.” Though initially stiff and uncomfortable in front of an audience, he soon warmed up to performing. His first live album, 1970’s Gold: Recorded Live at the Troubadour, was a lean and straightforward affair, with Diamond earnestly running through early hits like “Cherry Cherry” and “Kentucky Woman” backed by a small group of musicians and background vocalists, and then audibly blowing his voice out during the climactic “Brother Love’s Traveling Salvation Show.” But by 1972’s “Hot August Night,” which was recorded during a record-setting run of ten shows at the Greek Theatre in Los Angeles, Diamond had truly found his persona as a performer: Part denim-clad rocker, part acoustic-strumming lover man, part brooding poet, part Borscht Belt shtick-meister.

It was a combination that would serve him in good stead for the rest of his career, and endear him to millions of fans. But his propensity for both self-aggrandizing schmaltz and hokey humor made him something of an anomaly in the rock world, especially once he ditched the denim for sequins. He became a punching bag (or at least a punch line) for rock critics, thanks to Vegas-y live moments like the one captured during the recording of what would become his live album “Love at the Greek,” wherein Diamond invited both pop singer Helen Reddy and actor Henry Winkler to the stage to sing with him on “Song Sung Blue.” After Winkler shyly fumbled his way through a chorus, Diamond insisted that the Happy Days star “Do it like the Fonz would do it!”, cheering his efforts with Fonzie-style thumbs-ups and grunts of “Ayyy!”

The footage of that performance is, depending on your perspective, either hilarious or massively cringe-inducing, and possibly both — but it also makes for an interesting contrast with the sharp-dressed guy in aviator shades who grimly strummed his way through “Dry Your Eyes” just a few months later at The Band’s “Last Waltz” concert. That show, held at San Francisco’s crumbling Winterland Ballroom, was both The Band’s final performance as a live entity and (in retrospect) a final farewell to the hippie era, and the L.A.-by-way-of-Brooklyn singer-songwriter was clearly the odd-man-out among the likes of more critically-acclaimed “serious” artists like Bob Dylan, Neil Young, Van Morrison and Joni Mitchell. (Band drummer Levon Helm seethed that Diamond — who’d been invited by Band guitarist Robbie Robertson, who had recently produced Diamond’s “Beautiful Noise” LP — shouldn’t have been invited in the first place.) Diamond’s awkward presence at the “Last Waltz” spawned an oft-repeated rock legend, to the effect that he came off the stage following “Dry Your Eyes” and pompously told Dylan to “Top that!” — whereupon Dylan retorted, “What am I supposed to do, go out there and fall asleep?”

It’s a funny tale, one which plays on both Diamond’s reputation for taking himself far too seriously, and Dylan’s legendary way with a snappy comeback — the sort of “cool vs. uncool” showdown that rock snobs have been high-fiving each other over since Dylan traded new songs with Donovan in “Don’t Look Back.” But I’m actually more inclined to believe the explanation that Diamond gave to Rolling Stone in 2011, shortly before he was inducted into the Rock and Roll Hall of Fame. “Well, something like that happened,” he said. “Actually, it was before we both went on. He was tuning his guitar and I came over to him and I said, ‘You know Bob, those are really my people out there.’ He kind of looked at me quizzically. I said it as a joke, but I think it spurred him a little bit and he gave a hell of a performance.”

As a Dylan-loving rock snob myself, I have to admit that it took me years to appreciate the over-the-top bombast of Diamond’s live performances, his not-always-successful jokes (see the above Dylan anecdote), and his eccentric manner of drawing out certain words he sang to the point where they became almost unrecognizable. I loved so many of his songs, yet couldn’t seem to get my head around his whole “Jewish Elvis” trip. It was only upon seeing him perform on The Tonight Show circa 1989 or ’90 that I really began to peel the layers of the Neil Diamond onion…

Yes, he was completely over-the-top in his performance, and shamelessly invested in entertaining his audience — two cardinal sins in the eyes of someone (like me) who’d grown up believing that punk rock was the epitome of “real” music. But despite my own cynical projections, I began to realize that there actually wasn’t any cynicism at all in what he was doing. Like the line in his 1971 hit “I Am… I Said,” this really was a frog who’d dreamed of being a king, and who had somehow willed himself to become one; this was an international superstar who’d never lost touch with the shy and lonely kid from “Shilo” and “Brooklyn Roads.” Though he regularly topped the Pollstar lists of highest-grossing tours, Diamond wasn’t out there milking the rubes for their hard-earned cash — he was out there communing with the people who loved his songs, basking nightly in a level of soul-filling affirmation that he could never have even imagined experiencing, even in his wildest youthful daydreams. He might not have been “cool” enough for some, but at least he had the balls to go out there and be himself, or at least an amplified incarnation thereof.

I attended my first actual Neil Diamond concert on 1992’s “Lovescapes” tour, saw my last in 2015 on his “Melody Road” tour, and enjoyed about a half-dozen other shows scattered in between. Some performances and set lists were more memorable than others (the 2015 one was probably the best Neil Diamond concert I ever witnessed), but every show was like a two-way revival meeting, with the artist clearly getting as much love, joy and healing from the audience as they received from him. And I suppose that’s what saddens and worries me the most about the news that he can no longer tour — the thought that he won’t be able to revel in that sort of energy exchange anymore, because I suspect he needed it just as much (or even more) than his fans did.

The one silver lining to this unfortunate news, however, is that Diamond says he plans to “remain active in writing, recording and other projects for a long time to come.” Far too many of the albums he released in the 80s, 90s and 00s seemed like little more than excuses for him to go out on tour again, but 2014’s Don Was-produced “Melody Road” was easily his best record since his early 70s heyday, a lovingly crafted album filled with moving and memorable tunes; hopefully, he’ll now be able to focus his energies on creating another one that’s as good, or maybe even better.

Still, it doesn’t seem fair that an artist who has spent so much of the last half-century in a passionate relationship with the stage — or, as he grandiloquently termed it on the inner gatefold of Hot August Night, “the God-damnedest woman you ever saw” — won’t be able to at least enjoy some sort of victory lap. I mean, if I had my way, Neil Diamond would get to make his final exit from the stage by flying off on a giant, star-spangled knish while bellowing (as he so often did while introducing one of his biggest 80s hits) “Is there anybody here… from AMERICA?!?” Or maybe via a 50th anniversary tour of 1968’s underrated Velvet Gloves and Spit LP, with him playing never-previously-performed classics like “Sunday Sun,” “Two-Bit Manchild” and the infamous “Pot-Smoker’s Song…”

But alas, it’s out of my hands, so all I can do is wish him the best. Hot August nights will definitely seem a lot colder from now on.