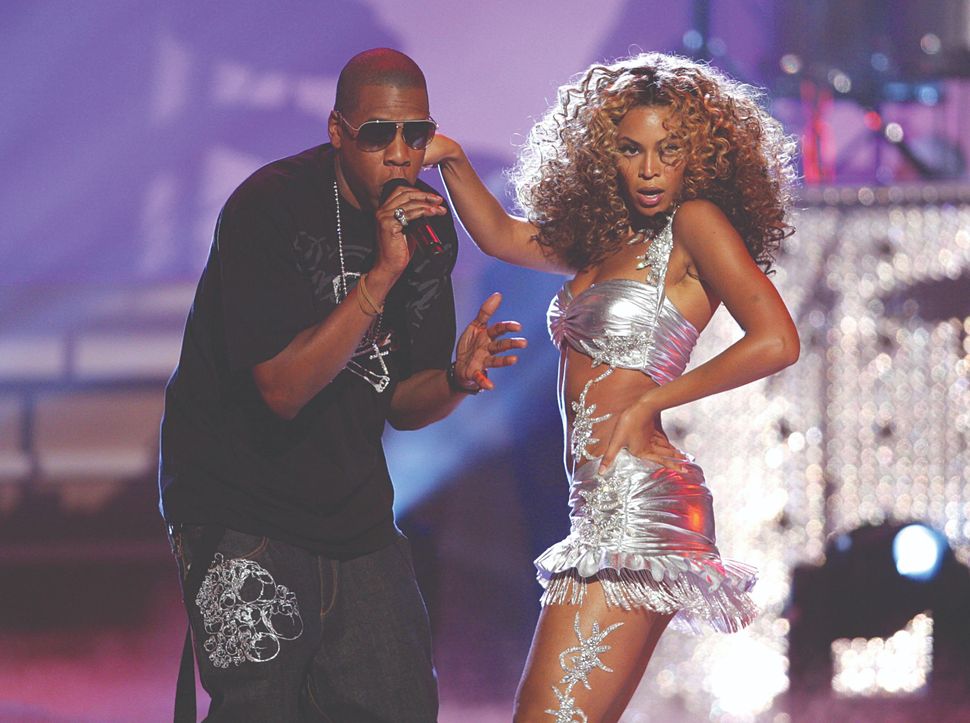 Beyoncé and Jay-Z, the first couple of pop music, kick off their second co-headlining stadium tour — dubbed the On the Run II Tour — on June 6 in Cardiff, Wales (home to about two in five Jews in Wales, or about 800 total). The tour will run through Europe for a month and a half before making its way through North America, where it will play through early October.

Separately, the two singers, rooted in R&B (Beyoncé) and rap (Jay-Z) while appealing to a mainstream, crossover audience, are arguably the biggest stars in the field; collectively, they are a multi-billion industry unto themselves. Jay-Z is as noteworthy for his achievements as an entrepreneur as he is for his 50 million record sales and his 21 Grammy Awards; Beyoncé bests him, however, at 100 million in sales and 22 Grammys.

On a previous tour in Europe, Beyoncé and Jay-Z made headlines when they took time off from their busy schedule to visit the Anne Frank House in Amsterdam. On her 2013 world tour, Beyoncé wore a red outfit created by Israeli designer Alon Livne. In 2016, she turned to another Israeli fashion designer, Inbal Dror, for sartorial inspiration on that year’s world tour. Beyoncé also wore a Dror-designed wedding gown when she appeared as a presenter at the 58th annual Grammy Awards in February 2016.

Earlier collaborations with Jewish artists included swapping tracks with Jewish-Canadian rapper Drake, who appeared on Beyoncé’s 2013 song “Mine.” Later that year, Drake released a track called “Girls Love Beyoncé.” The following year, Beyoncé recorded a version of the late Jewish-English soul-rock singer Amy Winehouse’s “Back to Black” with André 3000 for the soundtrack of Baz Luhrmann’s film version of “The Great Gatsby.”

Beyoncé first garnered public acclaim as a member of the girl pop group Destiny’s Child. While still performing under the name Girl’s Tyme, that Houston-based outfit was originally signed by Elektra Records after talent scouts from several labels flew into town for a performance at a Houston-area Jewish Community Center. Searching for a better name than Girl’s Tyme, Beyoncé’s mother, Celestine “Tina” Knowles, supposedly opened her Bible to a page where someone had stuck a photo of the group; the passage right below the photograph was Isaiah 65:11, which reads, “But ye that forsake the Lord, that forget My holy mountain, that prepare a table for fortune, and that offer mingled wine in full measure unto Destiny.” Hence, Destiny’s Child. (Don’t blame me; I’m just the messenger.)

That wasn’t the only bit of biblical inspiration that fueled the singing group on its path to success. The group’s breakthrough album was called “The Writing’s on the Wall,” alluding to the common phrase “read the writing on the wall,” whose origin traces back to the book of Daniel, chapter 5, wherein the title char-acter read the ominous writing on the wall to King Belshazzar.

Writing in Lilith magazine in 2014, Emilia Diamant compared the release of Beyoncé’s eponymous 2013 album to Moses bringing down the tablets from Sinai. Diamant wrote:

For Moses, the Jews rebelled. They were anxious… and they’d built the Golden Calf to quell their growing fears of the unknown. They bitched, as we often do, because they didn’t understand, because Moses had been away too long, because they were hungry.

For me, the “haters” began to hate. Beyoncé shouldn’t have said the word “bitch” on her album; she shouldn’t have worn such revealing clothing in the videos; she should have focused more on real feminism rather than using it as an artistic technique; and blah blah blah….

It’s bit of a stretch, perhaps, but Beyoncé does boast a real life, Moses-like connection. Through her mother, she’s a descendant of Joseph Broussard, the “Moses of the Acadians,” who led the first group of French-Canadian refugees escaping from British oppression into freedom in the promised land of southern Louisiana.

Although she’s famously a vegan, Beyoncé’s affinity to the people of Moses apparently also extends to a culinary kinship. When her tour stopped in Toronto in May 2016, the backstage hospitality at the Rogers Centre was catered by that city’s legendary Jewish deli Caplansky’s, reportedly to the tune of $3,500. That’s a lot of pastrami.

Beyonce’s husband, Jay-Z, got into some hot water last summer with a clumsy attempt at saluting Jewish self-empowerment in the greater context of calling on African Americans to step up their own entrepreneurial efforts. His song “The Story of O.J.” included the couplet, “You wanna know what’s more important than throwin’ away money at a strip club? Credit / You ever wonder why Jewish people own all the property in America? This how they did it.” That didn’t sit well with the Anti-Defamation League and other commentators. Never mind that Jay-Z (born Shawn Carter) lit a Hanukkah menorah in 2012 at the inauguration of Brooklyn’s Barclays Center in a “rededication” ceremony (he was an original investor in the arena and the Brooklyn Nets basketball team). Nor the fact that in 2006, Jay-Z joined fellow rap impresario Russell Simmons to film a public service announcement explicitly equating anti-Semitism with racism. Jay-Z got caught peddling a Jewish stereotype — even though, as he told one interviewer, he knows as well as anyone that Jews don’t own everything, because as a billionaire himself, he owns plenty. “Of course I know Jewish people don’t own all the property in America. I mean, I own things! So I know that they don’t own all of the property in America. It was an exaggeration,” he said.

It may or may not have helped Jay-Z’s case that one of the many nicknames he goes by is Hova. He explained to an interviewer that the derivation of the alias is a pun on Jehovah, or J-Hova. “I don’t want anyone to think I’m saying I’m God,” he clarified. “I know way better than that.”

Just in case you were wondering….

Seth Rogovoy is a contributing editor at the Forward. He frequently mines popular culture for unheralded Jewish affinities.