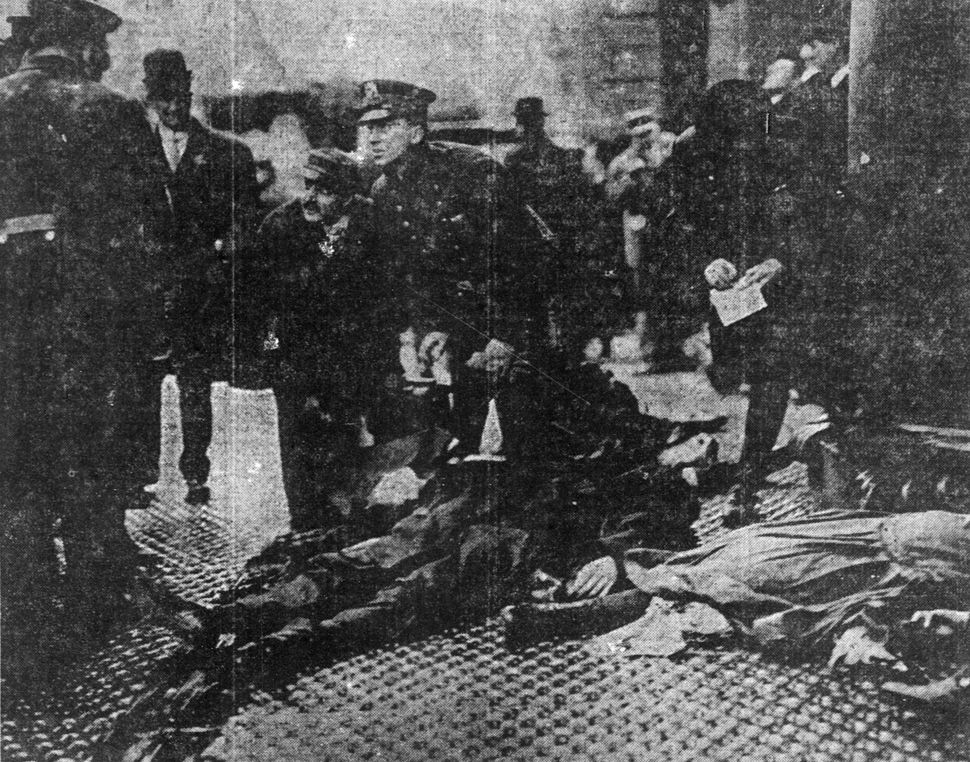 A policemen helps identify the dead after the Triangle factory fire. Image by The Pensacola Journal/Wikimedia Commons

With the country in a dire state, there’s a conundrum facing artwork with progressive ideals: It’s easy for them to sound cursory, like Twitter activism, except onstage. That’s the difficulty that might have faced Julia Wolfe’s oratorio “Fire in my mouth,” which had its world premiere at the New York Philharmonic on January 24 and runs through January 26. The work is a retelling of the tragedy of the 1911 Triangle Shirtwaist Factory fire, which killed 146 workers, most of them immigrant Italian and Jewish women. It’s striking, angry and deeply affecting. But Wolfe tells the long story of the fire, from the immigration of the workers it killed through the resounding outcry their deaths sparked. And in January 2019, it seems notable that the points at which she emphasizes the progressivism preached both in the fire’s wake and at garment workers’ strikes that preceded it feels, well, slightly empty.

A case in point are the words of the early labor activist Rose Schneidmerman, who made a moving call for mutiny after the fire, the staggering death toll of which was partially due to poor working conditions. “I would be a traitor to those poor burned bodies if I were to speak of good fellowship,” Schneiderman said. “I have tried you good people of the public, and I have found you wanting.” It’s easy to imagine the outraged thrill those words might have provoked when first uttered; they held a mirror to the puritanized myths of coexistence that had helped define America since the first colonists arrived. But when the women of The Crossing, a Philadelphian choir whose female members anchor “Fire in my mouth” alongside the Philharmonic, sing Schneidermann’s words, they make for a jarring break from the disjointed music of grief and rage that led into them. The good people of the public have been found wanting time after time, not least now. Can pointing it out, again, really do any good?

That sense of thwarted belief initially feels like a flaw in “Fire in my mouth” — or just a byproduct of living in a country at a time when some human lives are explicitly depicted as less human than others — but that sour note in fact deepens the work. The story of the Triangle Factory fire is, immediately, that of its enormous tragedy. But more broadly, it’s the story of how failures in humanity can turn perceived promise into cynicism. As immigrants still do today, those who arrived in America at the start of the 20th century came seeking something good, and found, at least immediately, a society that welcomed them largely at the cost of exploiting them. That exploitation could be briefly tolerated, but hope was bound to at some point turn rancid. Schneiderman’s speech was radical precisely because it was cynical.

It’s a victory for “Fire in my mouth” that it evokes cynicism alongside grief. Tragedies can obliterate nuance; it takes a brave voice to respond, as Schneiderman did, by calling not for a strengthening of bonds but a breaking of them. That bravery is not pretty, and it’s appropriate that Wolfe has made it glaring in a manner difficult to see as coherent with the rest of the work. Coherence isn’t the work of desperate times; outrage, in all its searing complexity, is. “Fire in my mouth” takes its title from Clara Lemlich, one of Schneiderman’s peers, who reflected on her days as a young labor activist by saying “ah, then I had fire in my mouth.” In this strange time, when it is too easy to feel hollow, so should we all.

Correction, January 30, 2019, 5:10 pm: A previous version of this article referred to The Crossing as a women’s choir. It is in fact a choir of both men and women.