What You Need To Know About R. Kelly’s Lawyer, Steve Greenberg 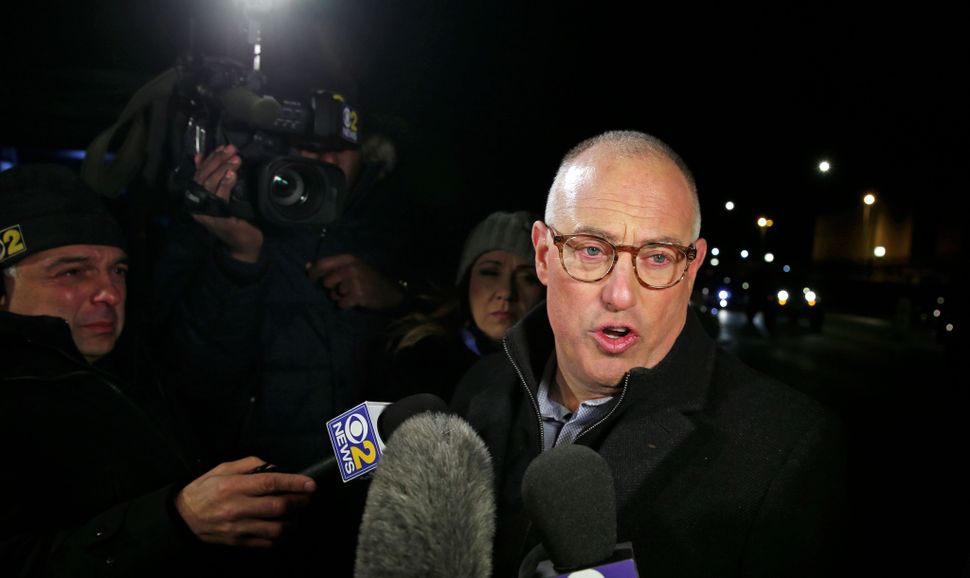 The “Trapped in the Closet” singer, whose real name is Robert Kelly, was arrested in Chicago Friday, February 22, on charges of aggravated sexual abuse spanning over a decade and involving four women, three of whom were minors at the time, the Associated Press reports. These already explosive allegations are drawing further attention due to the involvement of Stormy Daniels’ lawyer Michael Avenatti, who is representing two of the accusers. In a news conference Saturday, Avenatti took the opportunity to go after Kelly’s attorney, Chicago lawyer Steve Greenberg, for “false statements” and “outright falsehoods” regarding him and his clients.

Avenatti told reporters “Mr. Greenberg needs to pull his head out of his ass and defend his client.” Greenberg, who like Avenatti is not averse to network news appearances (and proudly lists them on his website), has, in fact, been defending Kelly – though his efforts have been at times bizarre.

Part of Avenatti’s argument against Greenberg involves a tape alleged to show Kelly engaging in sexual acts with an underage victim. Greenberg has reportedly claimed that the tape in question was already litigated in a 2008 case for which Kelly was acquitted and thus can’t be used under the Fifth Amendment’s Double Jeopardy Clause. In Friday’s question and answer session with reporters, Avenatti maintained the tape is different from the one from the previous trial and that Greenberg doesn’t know how double jeopardy works. Greenberg responded on Twitter, offering to compare his track record with Avenatti’s.

Memo to #MichaelAvenatti who blocked me but continues to insult me like a coward. I know exactly what the law is in Illinois about consent and double jeopardy. I also know how to make my point without insulting somebody. And I know that I’ve won More criminal cases in the last

Then you have one in your entire life. I would be happy to review my record with you. People are presumed innocent and the ultimate decision is not up to you So I am going to defend my client, and not worry about you. Have a nice flight back to wherever you came from. Bye

Before Kelly, Greenberg’s most visible case resulted in a definitive loss. In 2012, he defended Drew Peterson, a retired police sergeant charged with killing his third wife Kathleen Savio. According to NBC, Greenberg was fired from the team when Peterson was convicted. Peterson’s lead attorney Joel Brodsky told NBC Chicago Greenberg was let go for “his failure to perform and failure to accomplish the task for which he was hired.”

On Twitter Brodsky wasn’t shy in voicing his opinion about Kelly’s choice of defense.

R. Kelly picks Steve Greenberg as his spokesman, the same lawyer who is saying that Drew Peterson is an innocent victim. What message is R. Kelly sending with that choice? If Greenberg doesn’t want to be ineffective counsel again he needs to look up “prior bad act” evidence. Lol

With Kelly as a client, Greenberg, an attorney since 1986 now under his own shingle at Steven A. Greenberg and Associates, has been making some noteworthy claims in court and on Twitter.

After a judge ordered a curfew on Kelly’s use of his recording studio on February 8, Greenberg posted a statement to Twitter arguing that limiting the singer’s hours from 9:00 AM to 9:00 PM hampered his productivity. He also drew comparisons between Kelly and other artists and thinkers like Beethoven, Tolstoy, Freud and Elon Musk who were known to burn the midnight oil.

He is moving #Rkelly pic.twitter.com/LEJvxTegMj

“R. Kelly can never be creative and do his job under these circumstances which leaves him no choice but to leave his building,” Greenberg concluded.

When faced with consequences more onerous than a curfew, Greenberg issued some notable defenses for his client. At a bond hearing Saturday, February 23, Greenberg claimed that the “I Believe I Can Fly” singer, who is awaiting bail, couldn’t be a flight risk. “Contrary to the song,” Greenberg said. “Mr. Kelly doesn’t like to fly.” After a hearing on Friday, Greenberg dismissed the 10 charges leveled at his client, claiming Kelly didn’t pressure anyone to have sex with him.

On Monday, February 25 Greenberg pleaded not guilty on behalf of his client.

When asked this weekend how Kelly was paying him, given the singer’s reported financial troubles and difficulty managing bail, Greenberg responded, “That’s none of your business.”

What You Need To Know About R. Kelly’s Lawyer, Steve Greenberg