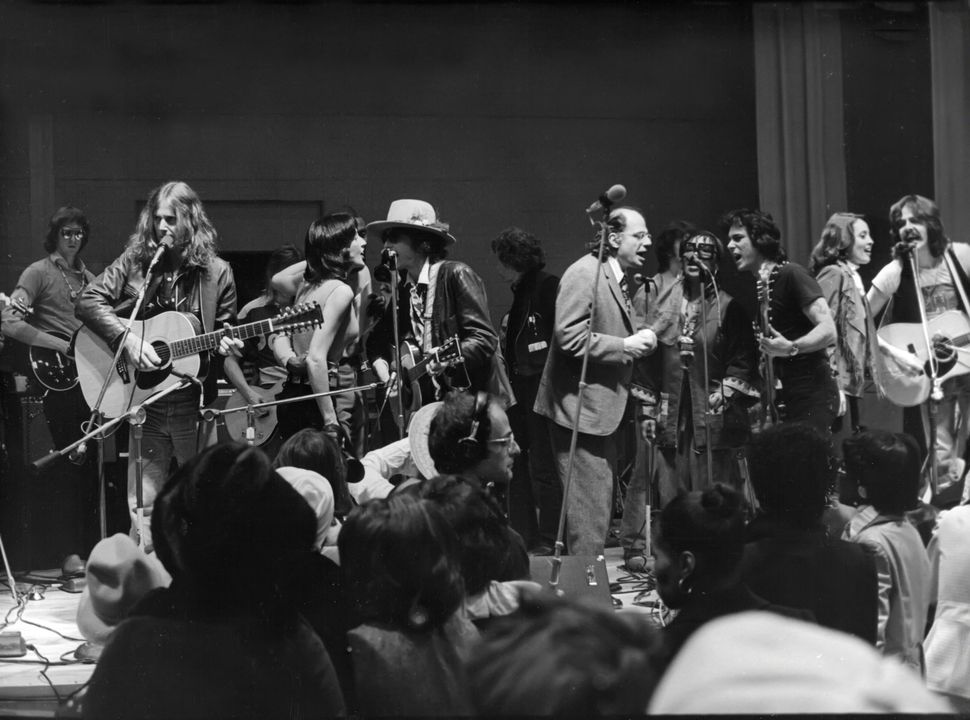 Bob Dylan and the Rolling Thunder benefit at a benefit for Hurricane Carter. Image by Getty Images

There is a telling moment in “Rolling Thunder Revue: A Bob Dylan Story,” a new film by Martin Scorsese that played in theaters for one night only on June 11, before commencing to stream on Netflix on June 12. David Mansfield, who at age 19 played mandolin and pedal-steel guitar on the 1975 Rolling Thunder tour, talks about how he was in awe of many of the performers. Mansfield, the son of a Polish-Jewish violinist who escaped occupied France and made it to New York City in 1941, was particularly taken with the iconic folk music figure Ramblin’ Jack Elliott, a onetime Woody Guthrie-sidekick who seemed to ooze “authenticity,” to use Mansfield’s word. Then, one day Mansfield learned that Ramblin’ Jack was really Elliott Adnopoz, the Brooklyn-born son of a Jewish dentist. So much for “authenticity.”

Arguments about authenticity aside, Mansfield — who was reportedly one of several tour musicians who were born-again Christians and who may have had some influence on Dylan’s eventual dunk into those baptismal waters — didn’t have to look too deeply to discover that he was surrounded by a veritable minyan. Rolling Thunder bassist and musical director Rob Stoner was born Robert David Rothstein in New York City. Tour philosopher and hanger-on David Blue was born Stuart David Cohen. Singer-songwriter Kinky Friedman was born Richard Samet Friedman in Chicago in 1944 to Dr. S. Thomas Friedman and his wife Minnie (Samet) Friedman. Dylan sidekick and guitarist Bob Neuwirth was a member of the tribe, as was tour manager Louie Kemp, a boyhood friend who met the young Robert Allen Zimmerman at the Wisconsin-based Zionist summer camp, Camp Herzl. So was Jacques Levy, a theater director (“Oh! Calcutta!”) who co-wrote some songs with Dylan and served as stage director for the very theatrical tour. Poet Allen Ginsberg was part of the troupe, and Queens-born Larry “Ratso” Sloman, while ostensibly reporting on the tour for Rolling Stone, loomed large as a tour celebrity, as is made clear in Scorsese’s creative re-telling of Dylan’s barnstorming bus tour that played alternative venues throughout New England, Canada, and parts of upstate New York from late October through early December. (A second leg of the tour, which traveled through parts of the South and the Midwest for a little over a month and featured many but not all of the same personnel, picked back up in April 1976.)

As seen in the Scorsese movie and as heard on the brand-new, 14-CD box set, “The Rolling Thunder Revue: The 1975 Live Recordings,” Bob Dylan was on fire at this point of his life and career. While often decried as an indifferent performer (a judgment with which I take issue), no one can deny that Dylan was fully engaged at this moment. Perhaps it was due in part to his urgent mission to bring awareness to the plight of the imprisoned boxer Rubin “Hurricane” Carter, falsely convicted of a triple murder, whose story Dylan brilliantly turned into a latter-day protest song, “Hurricane.” Perhaps it was the sense of camaraderie that resulted from reuniting so many figures from the Greenwich Village folk scene of the early 1960s – including Joan Baez and Roger McGuinn of the Byrds — and taking them on the road. Or perhaps it was merely because Dylan knew that cameras were rolling the entire time, onstage and off, capturing footage for what would become his own critically acclaimed but commercially disastrous four-hour, 1978 film, “Renaldo and Clara.” (Scorsese draws upon that footage, interspersed with talking heads-style interviews, some with tour participants, most notably a very good-humored and witty Bob Dylan, and – spoiler alert – others which, while they will be utterly convincing to most moviegoers save for the most obsessed Dylan fanatics, feature actors playing fictional characters involved with the tour.)

Whatever it was, something animated Dylan into giving some of the most intense performances of his career. His song choices were significant, too, and they may offer a hint as to what he was channeling. He was in full prophetic mode, reviving early Sixties protest songs including “Blowin’ in the Wind,” “With God on Our Side,” and the still-stunning (and terribly relevant) “Lonesome Death of Hattie Carroll,” and more mystically inclined, mid-to-late Sixties numbers including the apocalyptic “A Hard Rain’s a-Gonna Fall,” the riff on Ezekiel, “This Wheel’s on Fire,” and “I Shall Be Released,” a song of messianic yearning.

On the Rolling Thunder tour, and on the album, “Desire” that was recorded around the same time and released in January 1976, Dylan also made the most Jewish-sounding music of his career. His new sound was accented by the Gypsy/klezmer ornaments of Scarlet Rivera’s violin. In tandem with Dylan’s downright cantorial singing on such minor-key numbers as “One More Cup of Coffee” – on which Dylan adopts the achy, bent, and cut-off vocal techniques of the Old World khazns – you could be forgiven for being momentarily transported to shul and for having forgotten that you are watching or listening to a rock concert. Especially when you look out into the audience and see that it is mostly populated by older women playing mahjong.