How a search for Jewish inclusion helped create ‘Puppy for Hanukkah’ 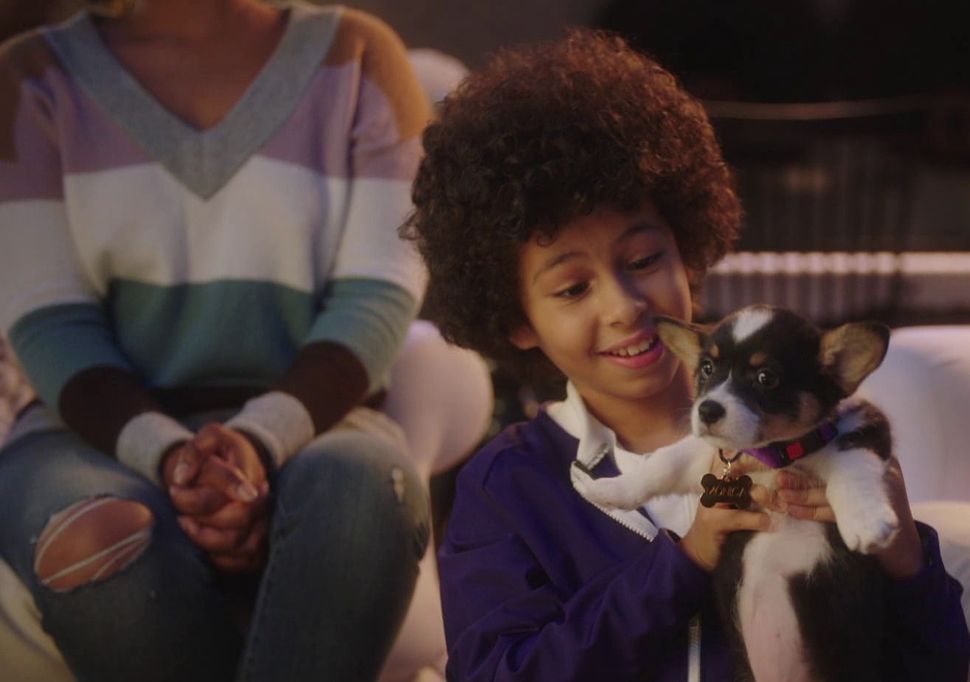 By now we all know Daveed Diggs’ “Puppy for Hanukkah” is a certified bop. But it was also meant to be something more than just a fun ode to the Festival of Lights.

If you wade your way through the effusive social media comments — and some parents playfully cursing the Walt Disney Company for raising this season’s gift-giving expectations — it doesn’t take long for a trend to emerge.

People are swept up by the beat and the video’s determination that sour cream is the best latke topping. But viewers are truly moved by what the video shows: a diverse cast of kids lighting the candles, spinning dreidels and even reciting the blessing in Hebrew.

“As a Jew of Color, this makes my heart so happy,” wrote YouTube user Melissa Homer on the post for the music video. “I can’t tell you the joy it is to raise my children in a world where seeing images like this is just a normal part of their childhood and they will always feel like a fully embraced part of the Jewish community.”

When Jill Hotchkiss, vice-president of creative marketing for Disney Channels Worldwide read that Tweet, she was thrilled.

“I was like, mic drop, that’s exactly it,” Hotchkiss said from her home in Los Angeles. The oft-overlooked multiculturalism of the Jewish community was exactly what she wished to convey when she pitched the idea of a Hanukkah song to Diggs.

In the aftermath of this summer’s Black Lives Matter protests, Hotchkiss was taking stock of her own social circle. She realized that her Jewish communal life was overwhelmingly white. In an effort to change that, she explored other LA-area congregation’s online services during Yom Kippur to get an idea of how to expand her own temple’s community. But she wanted to bring that notion of diversity to bear on Disney Channel, too.

A solution presented itself over dinner, when Hotchkiss’ 15-year-old daughter said, “Daveed Diggs is Jewish, Mom. Do something with him.” It was a no-brainer. The family are “Hamilton” fanatics and Diggs was a perfect collaborator for a Hanukkah standard that went beyond the usual Sandler-esque novelty.

Diggs — who wasn’t available for an interview — was a hard guy for even the Disney Channel to get in touch with. When Hotchkiss finally reached him, with an idea about a Hanukkah song that reflects the diversity of the Jewish community, he, and his band Clipping, were into it.

They had an hourlong Zoom creative discussion to iron out a concept. Diggs was happy to write and perform. But, he said he didn’t have the bandwidth to appear in the video himself. The director, Alexander Gradet, came up with a soon-to-be iconic workaround: Get a cast of kids to lip sync.

In scouting the talent, Hotchkiss and her team looked for energy and, most importantly, diversity. Those familiar with the Gen-Z set may recognize some of these kids’ “Fortnite”-inspired dance moves.

When the track arrived, Clipping’s work — a rare bit of family-friendly fare from the group — exceeded expectations, merging a hip-hop beat to klezmer clarinet and tsimbl while Diggs’ vocals perfectly capture a mood of childhood anticipation. There were hardly any notes on the song. Yet, there was still one matter to be settled: The puppy.

Diggs and Hotchkiss discussed the breed. Hotchkiss wanted a mini Australian shepherd, the kind of dog she has. Diggs said his mother has an Aussie herself. Ultimately, it was a Corgi puppy named Jack who popped in casting. Yes, Monica the puppy is a boy.

As cute as the video is, its quiet inclusiveness is what is resonating with so many Jews of color.

“What Diggs gave us was an image of Black joy paired with a genre-merging instant classic that showed us authentic representation without having to tell us that that’s what was happening,” wrote Jesi Taylor Cuz in an article for Alma.

“It’s just nice to feel seen without being tokenized, fetishized, or having the experiences of Black Jews written by white, non-Jews who happen to be in the writers room or showcased for the sake of representation alone.”

Hotchkiss says she is thrilled with the reception — and by the fact that Lin-Manuel Miranda included the song on his Spotify holiday playlist. She hopes the tune, a much needed addition to a songbook starved for content, will be sung around menorahs this Hanukkah. Before the sun sets on the first night, she’s already overwhelmed with the comments she’s seen online, and from those in her life.

“A friend of mine is white, Jewish, and she’s married to a man who is Black and they have a daughter and I sent her the video,” Hotchkiss said. After watching the video, the husband had one thing to say: “Oh my God, we’re not the others.’”

How a search for Jewish inclusion helped create ‘Puppy for Hanukkah’