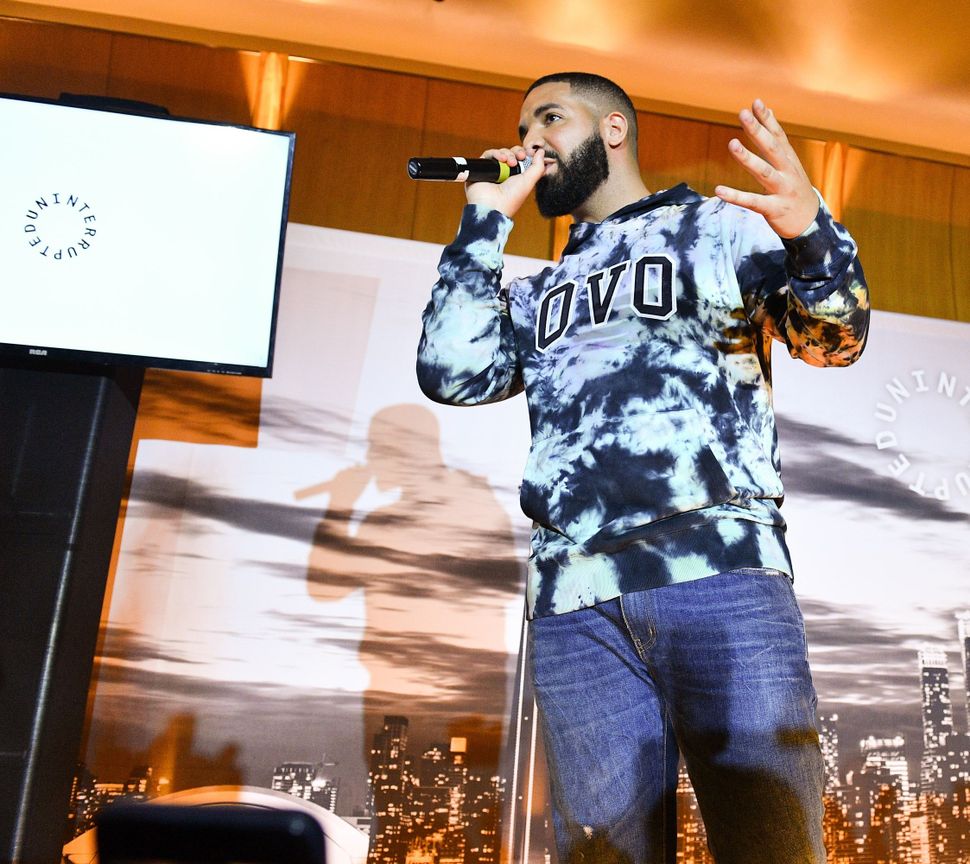 In his newly-released EP, Drake is once more considering God’s plan for him. Judging by one song’s contemplation of Jesus, he may be entering a 1980s Dylan phase.

On the track “Wants and Needs,” the artist formerly known as Aubrey Graham reflects on his success, which his mother, Sandi (née Sher) suggests is “Godsent.”

That suggestion evidently nags at her son, a former Jewish day school student, who goes on to wonder if he’s lost sight of his more spiritual side in between his Maybach cars and payments to women named Brenda and Laticia.

“I probably should have gone to Yeshiva,” Drake offers, before confessing that he ended up in Ibiza, the Spanish island on which the rich are habitués. Quite the contrast.

On top of a chirping bed of electronic noise, Drake sorts through industry slights, “42 millimeter” Swiss watches and what, if anything, they have to do with faith. But after alluding to another path as probably the only “Degrassi” alum to study Talmud, he weighs the advantages of another religion.

“I probably should go link with Yeezy [Kanye West],” Drake sings, “I need me some Jesus.”

Is Drake thinking of entering a Christian phase? In this verse, it seems unlikely. He and Kanye have beef and this could be read as a jab at West’s recently found faith after years of being a self-centered jerk who regularly compared himself to Jesus. But Drake doesn’t drop the idea there.

The chorus states that Drake has “sins on my mind,” claiming he should “should repent, I need me some Jesus in my life.” That’s also how the song ends — along with an “amen” pronounced “ay-men.”

Naturally the question is: Are we losing Drake like we lost Dylan from ‘79 to ‘81? The answer to that is complicated and the question itself uncomfortable. Drake is a Jew — he’s made no secret of the fact. His dad is also Catholic. He can and does belong to both traditions and neither is a zero-sum game. That’s his interfaith journey. (He once lent some insight to DJ and music journalist Tim Westwood on this account.)

But any concern is probably unwarranted. “You need Jesus” is a pretty common phrase said in jest to someone who behaves objectionably. It’s that expression that Drake appears to be having fun with here. And if Drake was truly serious about entering into a devout born-again phase a la Kanye, he probably wouldn’t have alluded, earlier in the song, in quite explicit terms, to his ability to sexually please a woman.

Rather, Drake is trying to communicate an idea of repentance, one he may or may not actually feel compelled to enact, in a way that is accessible and widely understood. While the Jewish tradition Drake was brought up in has ideas about atonement, it might be a bit alienating for a general audience. Teshuva may not fit his rhyme scheme and it may be a bit too much (if also incredibly questionable) to ask for him to sample Kol Nidre.

But that doesn’t mean Drake doesn’t know about them. After all, he once thought about enrolling in Yeshiva.