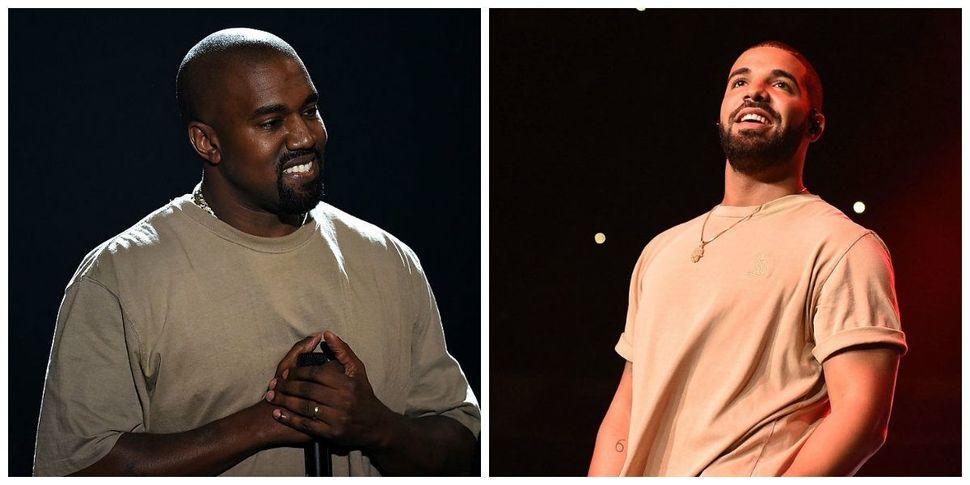 The bell of Elul tolls for all of us, and rap gods are no exception.

Just days before Rosh Hashanah, rap mogul Kanye West has reached out to musical peer Drake to bury the hatchet over conspiracy theories that, among other things, Drake had an affair with Kanye’s spouse Kim Kardashian. Kim herself came forward yesterday to quash these rumors, and Kanye, not one to stay silent when he could speak, reached out to Drake over Twitter in the early hours of Wednesday morning. The maverick artist aimed to bury a beef that has sizzled over a low burn between the two artists for some time concerning both personal and professional issues.

For one thing, Kanye uses the word “apologize” (that’s more than Louis C.K. did when he acknowledged that he committed multiple instances of sexual misconduct!)

Let me start by apologizing for stepping on your release date in the first place … We were building a bond and working on music together including squashing the issues with Cudi at our office.

Kanye takes responsibility. He accepts blame. He puts his action in context, without excusing them.

Delicately, he avoids implicating anyone else (namely the man with whom Drake has a true beef: rapper Pusha-T.)

I did not have any conversations about your child with Pusha. I don’t play with the idea of people’s children after I spoke to Wiz a few years earlier.

I understand Pusha’s issues as a man if someone mentions your fiancé men go mask off. I’ve done the same myself at times. I love you and I love Pusha and we all have an admiration for each other’s craft.

Most vitally, he invokes jedis. Then, he explains that he plans to come watch Drake perform, and pays him a compliment. He sets an explicit timeline for his plans to make amends.

This is all Jedi level. I will be coming to your show within the next seven days to give love and be inspired by the art you have created.

Kanye West hurt a lot of people this year. But this mini-masterclass in teshuva [repentance] could be a new beginning for him — the man clearly wants to be inspired in the book of (the) life (of Pablo.)