That time my dad, Leonard Bernstein, introduced us to The Beatles 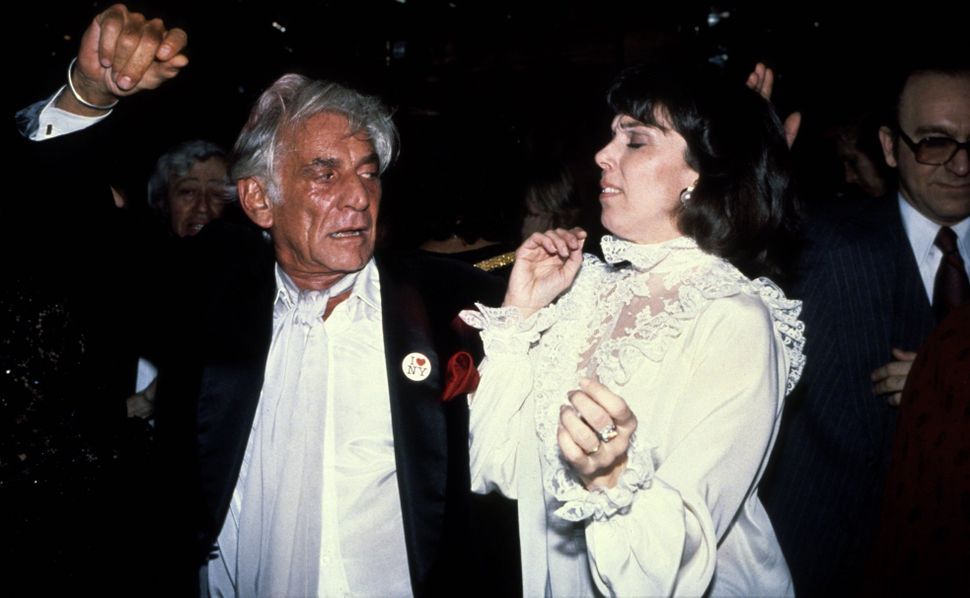 Editor’s Note: Today, Aug. 25, 2021, would have been Leonard Bernstein’s 103rd birthday. In honor of that auspicious date, we are revisiting this excerpt from his daughter Jamie’s memoir.

In February of 1964, halfway through my sixth-grade year, the Beatles came to America. By coincidence, Aunt Shirley was returning from a trip to England on the same day the Beatles were landing at the recently renamed John F. Kennedy Airport. When we went to pick Shirley up, the airport was still crawling with dazed teenage girls; the Beatles had landed a mere couple of hours earlier. On the drive back into town, Shirley revealed that she had originally been booked on the same Pan Am jet that the Beatles were on, but at the last minute had changed her flight to TWA because, she explained, they had this great new feature: a projector was set up at the back of the aisle and a screen up front, and they showed a movie. I was aghast: For this, Shirley had missed being on the same plane as the Beatles?

A few days later, the Beatles appeared on “The Ed Sullivan Show” — an event so seismic that Mummy and Daddy agreed to let us watch it during dinner. Alexander and I wheeled the little TV down the hallway from the library to the casino fancy dining room — the same TV on which we’d seen Jack Ruby shoot Oswald just a few months earlier. We fiddled with the antenna until the black-and-white picture lost most of its fuzz, and then watched history in the making once again.

To say I was a Beatlemaniac does not begin to convey the depth of my obsession. The Beatles were my ground of being: like air to a bird, like water to a fish. I wrote poetry about them, kept logs of my dreams about them. (In one dream, George Harrison noticed I was already wearing a bra and kissed me on the cheek. “But real suction!” I wrote.) My girlfriends and I listened over and over to the albums, gazing at the cover art, memorizing the lyrics. Whenever we sang Beatles songs, I always sang the harmony. I lived in that harmony. 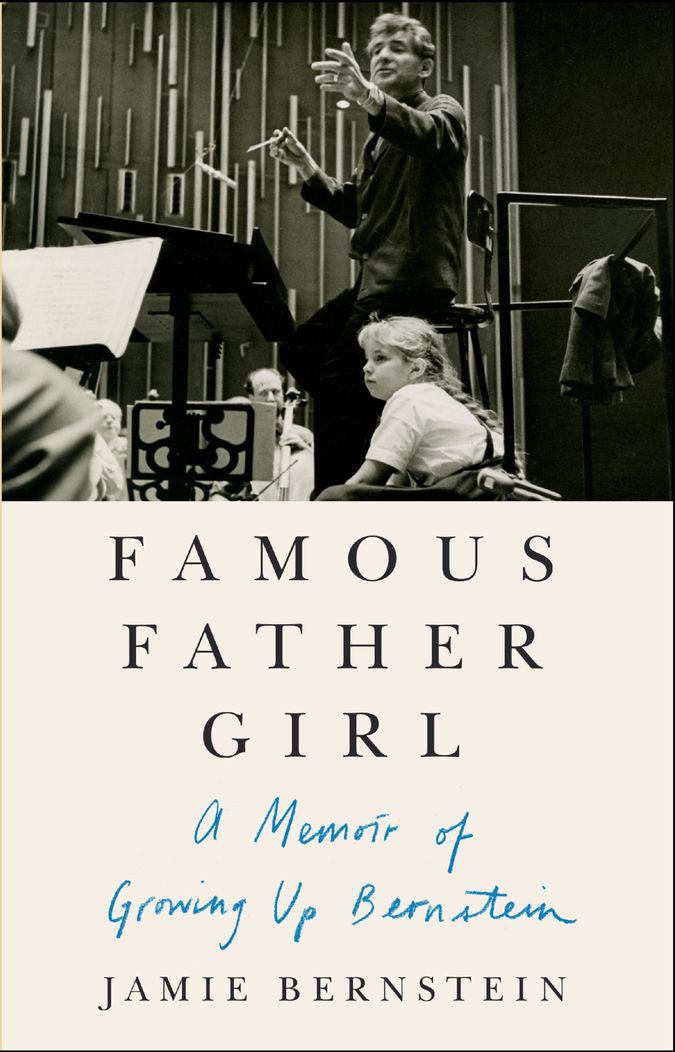 Daddy loved the Beatles, too, which made me particularly happy. In the swimming pool the following summer, he came up with a third part to “Love Me Do,” so that he, Alexander, and I could sing the song together in three-part harmony, right there in the corner of the deep end. On one of his Young People’s Concerts, Daddy explained the A-B-A structure of sonata form by singing a Beatles song. Oh, how the girls in the audience squirmed and squealed as he accompanied himself on piano, singing “And I Love Her” in his not-so-McCartneyesque voice! He must have known he was onto something, because he began regularly incorporating the Beatles, and other pop music, in his Young People’s Concerts, to illustrate his various points. It kept the kids in the audience interested, just as it had for Alexander and me. (We, and later Nina, were in effect the ongoing guinea pigs for Daddy’s Young People’s Concert ideas.)

John Lennon was Daddy’s favorite Beatle, as he was mine. We were both enchanted by Lennon’s book of poetry, “In His Own Write,” and pored over it together. Daddy invented a singing game for Alexander and me to play with him while the three of us lay wedged into the hammock under the big maple tree after dinner. We would invent a round, à la “Row, Row, Row Your Boat,” using Lennon’s poem “The Moldy Moldy Man.” Whoever started the round got to choose what kind of melody it would be: sad, perky, waltz, military. After the first line — “I’m a moldy moldy man…” — the second person had to come in, echoing person number one. Then the third person would come in. The fun of the game was, of course, that you couldn’t possibly repeat the line you’d just heard while simultaneously listening for the next one. It was deliciously hopeless, and a raucous shambles every time — always punctuated at the end by person number three dolefully singing the last line all alone after the other two had finished: “… I’m such a humble Joe.”

Eventually, word got back to John Lennon — or to his manager or press agent or somebody — that Leonard Bernstein was thinking about possibly setting some of the “In His Own Write” poems to music. This led to Daddy being invited to meet Lennon backstage during a dress rehearsal for “The Ed Sullivan Show.” It was by now the summer of 1965, and the Beatles were returning to the U.S. to make their highly anticipated second Ed Sullivan appearance. Naturally, our father asked if he could bring his two older children with him to the rehearsal.

We were going to meet the Beatles!!!

Daddy drove us into town from Fairfield. I was painfully conscious of the fact that I had braces and still didn’t shave my legs. What hope did I have of getting any Beatle to fall in love with me? Our father was summoned backstage first, while Alexander and I remained, perplexed and frustrated, in the theater seats watching a tedious rehearsal of a comedy duo who thought it was funny for one of them to wear a Beatles wig. Finally an usher came to escort us through the grimy backstage corridors of the theater until we were in front of a door with a star on it. The usher knocked. 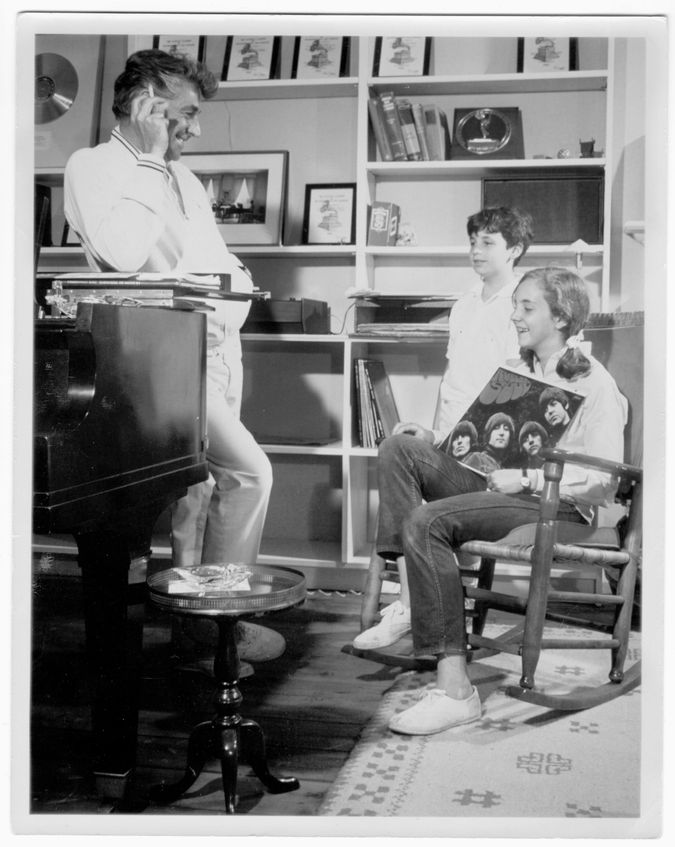 Leonard Bernstein and Family Image by Courtesy of Jamie Bernstein

The door opened and there they were: John, Paul, and George. But no Ringo. Why? Because the other three had been eating hamburgers with onions, and any Beatlemaniac worth her salt knew that the two things Ringo hated most were onions and Donald Duck, so of course he’d gone off to a less smelly room.

Alexander and I were introduced, and shown to chairs. I was seated next to Paul, who went to the trouble to be friendly and ask me some polite questions. (I have since heard many similar reports from people who met the Beatles; Paul was a gent.)

Daddy was sharing cigarettes with everyone and chatting away with them as if they were old friends. Maybe we sang them a round of “Moldy Man”? I don’t remember. I was in a coma of awe.

The three Beatles had an interesting argument about whether to put on their signature suits for the rehearsal. John and George didn’t want to. Paul said, “Come on, lads, it’s a dress rehearsal! We ought to be dressed, then!” (Once again, Paul was the one behaving like an adult.)

On our way out, the usher knocked on the adjoining dressing room door. We heard a muffled “Come in,” and when the door opened, we saw two feet in red socks on a cot; the head of the bed was obscured by a locker. But when the body wearing the socks sat up, it was a sleepy Ringo; we’d woken him up from a nap. Sorry, Ringo!

The next day, back at my day camp in Connecticut, there was all-out pandemonium when the girls found out where I’d been the day before. Sometimes it was purely great to have Leonard Bernstein for a father.

Copyright © 2018 by Jamie Bernstein. Reprinted courtesy of Harper, an imprint of HarperCollins Publishers.

That time my dad, Leonard Bernstein, introduced us to The Beatles