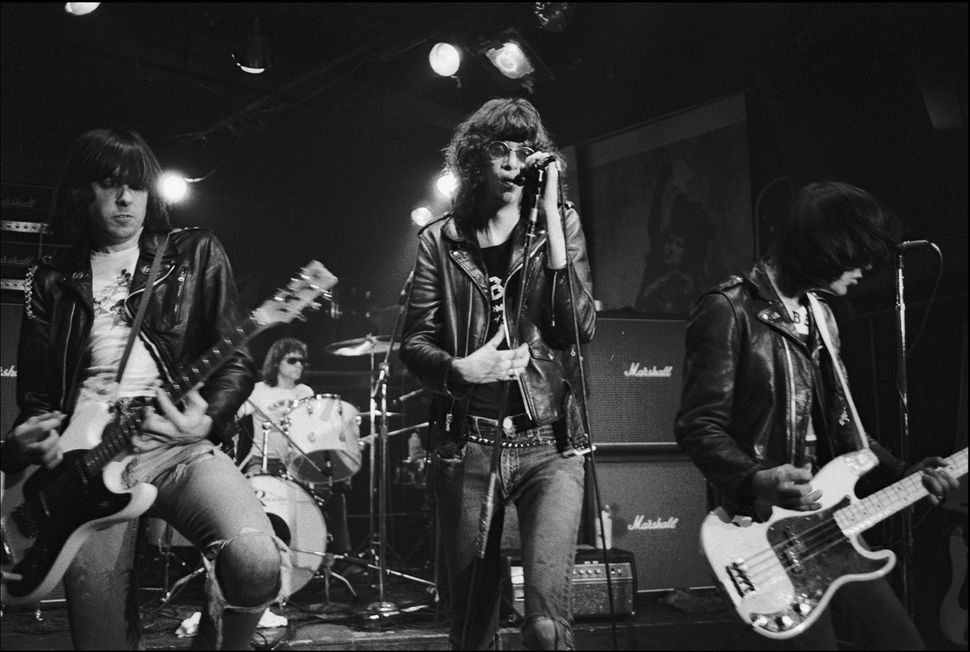 The Ramones Image by Getty Images

Like the Beatles, the Ramones were four distinct personalities. There was the freak (Joey), the quiet one (Tommy), the angry one (Johnny) and the cracked one (Dee Dee). Sometimes the quiet one was seen as the runt of the litter, the one who didn’t belong, while the cracked one was variously seen as a holy fool and psychotic, but the images were real enough that they captured something of the dynamic in the band and were embodied in their songs.

Perhaps this was never truer than on “Commando,” a track from their second album, “Leave Home.” Though ostensibly about American soldiers fighting the Cold War, it’s really only the chorus that anyone remembers, a chorus that outlines four distinct rules:

First rule is — the laws of Germany

Second rule is — be nice to mommy

Here, in a nutshell, is the spirit of the Ramones. Two Jewish guys and two non-Jewish guys, sparring back and forth in a never-ending conflict that eventually forced Tommy to quit for fear of losing his mind and for Joey not to speak to Johnny throughout most of their career.

The Ramones are notorious for being dysfunctional, a fitting description for a group that was synonymous with neurosis and freaks as well. Many attributed these qualities to the nature of their home city — New York — citing its urban character and its then-crumbling infrastructure while failing to consider its history and the makeup of its inhabitants.

According to many who made up the original punk scene centered around CBGB (the club founded by Hillel “Hilly” Kristal and located within spitting distance of the Lower East Side), it was not uncommon during their childhoods to see numbers tattooed on the arms of adults in their neighborhoods, just as it was typical to be glued to their TVs with their families, watching the 1961 Eichmann Trial, which was broadcast for weeks like a nightmare soap opera in which the characters were turned into soap. That trial led to a nationwide grappling with the Holocaust and the question of Jewishness in general. “Portnoy’s Complaint,” “Fiddler on the Roof,” “Sophie’s Choice,” the television series “Holocaust.” It was in the air.

In the Ramones it went deeper, baked into their very genetic structure. Their origin story goes directly back to the horror, their founder a traumatized Jew hiding in plain sight. Born in Budapest to parents who barely survived the Holocaust, it was Tamás Erdélyi (Tommy Ramone) who first brought the band together and gave it its distinctively nervous drum sound.

He recruited childhood friends John Cummings (Johnny), an angry son of Irish and Lithuanian parents who Tommy had always seen as enticingly dangerous, and Douglas Colvin (Dee Dee), an unstable kid who’d spent part of his childhood in Germany and was forever obsessed with the darker side of that country’s history, regularly going on Nazi-memorabilia-shopping sprees with Johnny later while the band was on tour.

Yet it was Jeffrey Hyman (Joey) who was Tommy’s most inspired choice, the freaky one that he insisted be the lead singer despite the other members’ protests. Tommy felt that Joey — a kind of walking Der Stürmer caricature — was the perfect frontman for the psychological shadow play he referred to as his “art concept.”

For a while, Tommy found catharsis. Joey didn’t just look like a caricature out of Der Stürmer; he was crippled by neurosis (obsessive compulsive disorder), as alienated as Kafka (“He hardly left the house,” said his brother), originally as skinny as a concentration-camp inmate (six foot six and 120 pounds) and possessed of a hook nose unmistakable in its origins. At the same time this patron saint of punk was both funny and sweet, a mensch as his intimates described him, and, later in the band’s career, its most visible liberal, donating his time to a variety of causes and writing a song lambasting Reagan for visiting a cemetery honoring members of the SS (“Bonzo Goes to Bitburg”).

They should have been huge, but they weren’t. The mainstream couldn’t accept them. And Tommy should have been lauded like his bandmates once the public came around, but he’d been erased from history, having left the band after its first three albums, hounded out by Johnny in particular, who belittled him with antisemitic slurs. Johnny’s slurs were later directed at Joey and contributed to a rift in the band that never healed. The Ramones carried on, but they were divided, a shadow of their former selves. The tensions that had fed inspiration, the tensions that Tommy had sought to exploit to exorcise the demons of his past, overwhelmed.

But for a while, all was good and pure in the land that Tommy had built, the rules followed to a T, from German law to kosher salamis, the tensions made comical, the joke on the insiders and the last word from those they’d oppressed. For that brief shining moment, when punk was new and some thought that it would change the world, Tamás Erdélyi’s rock ‘n’ roll commandos ruled the Lower East Side, gave New York a voice and pushed a retiring Jew scared to leave the house onto the biggest stage possible, raising up the kleine menschele to the Übermensch role. Emphasis on mensch.

Steven Lee Beeber is the author of “The Heebie-Jeebies at CBGB’s: A Secret History of Jewish Punk.” He teaches literature and creative writing at Lesley University and GrubStreet and once played sax for the Atlanta-based gospel-punk band The Chowder Shouters.