For Dori Berinstein, ‘The Prom’ Is A Heartland Show With A Jewish Soul 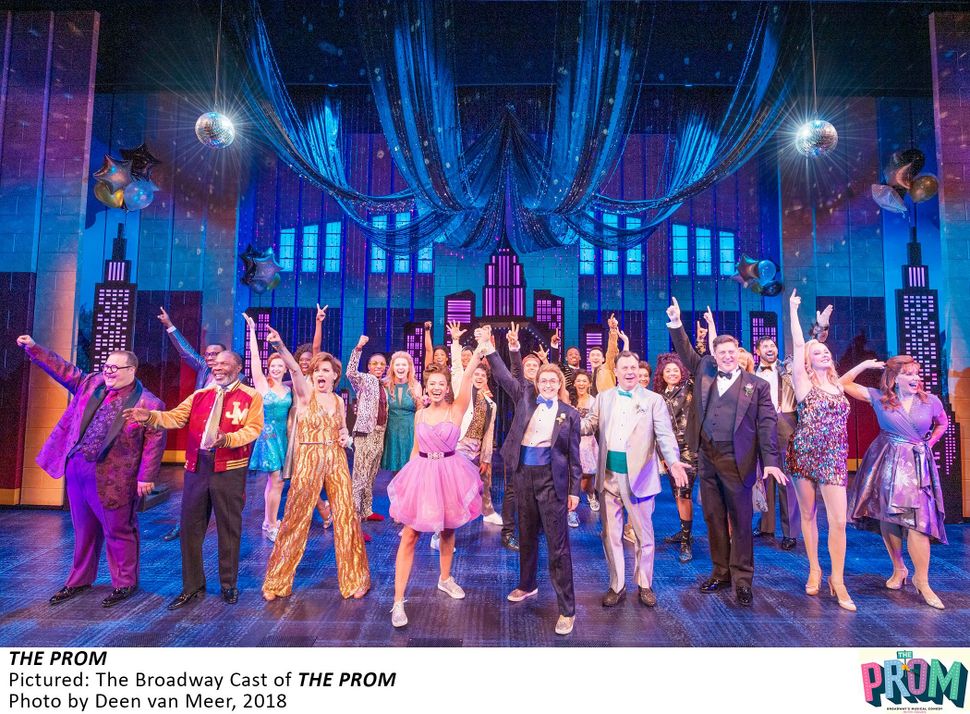 The cast of “The Prom.” Image by Deen Van Meer

Dori Berinstein’s latest Broadway venture, “The Prom,” was sparked by a Mississippi media circus and a two-sentence pitch.

In the spring of 2010, the circus paraded through Itawamba County Agricultural High School. The school, near Tupelo, canceled its senior prom rather than allow Constance McMillen to bring her girlfriend to the dance and, possibly worse, wear a tuxedo to the affair. A subsequent “secret” prom arranged by parents, attracted media coverage around the globe. On her TV show, Ellen DeGeneres presented Constance with a check for $30,000 to cover her college expenses.

That got Jack Viertel, a Broadway theater executive, thinking. He pitched the story, with an added twist, to Casey Nicholaw, an up-and-coming director and choreographer he was working with at the time.

“He called and said, ‘I have the weirdest idea,’” Nicholaw told me over the phone, “about this gay couple that was not able to go to their prom – what if it started with a bunch of Broadway actors who wanted something more out of their lives and decide to get involved?”

Adds Viertel: “It’s a terrible idea for real life, but it’s a funny idea for a musical. It’s a Preston Sturges movie waiting to happen.”

Nicholaw assembled a team he’d been working with – Bob Martin and Chad Beguelin to write the book, Martin Sklar to compose the music and Beguelin to write the lyrics. They liked the idea of an original musical, ripped from the headlines, with a message (and also lots of dancing and comedy and a splash of romance).

Who would produce such a show that lacked the imprimatur of a Hollywood brand name, and movie stars to jazz the marquee? In February 2011, the team met at Bar Centrale, the not-so-secret watering hole of choice for Broadway cognoscenti, with Berinstein. Nicholaw had known her since his days as a dancer in “Thoroughly Modern Millie,” which she had co-produced nearly a decade earlier. 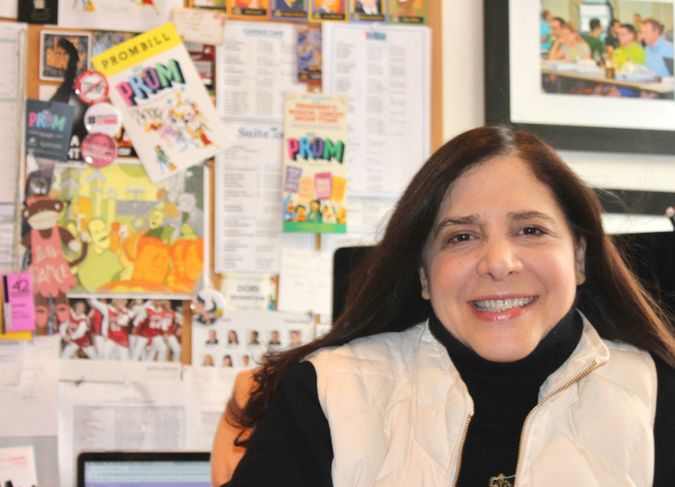 At Home In Her Office: Dori Berinstein Image by Jeremy Gerard

“I’m looking at these geniuses, at these people I love working with,” Berinstein says, sitting across from me in her shoebox office in a warren of shoebox offices overlooking Broadway and 51st Street, “and know that they could hit that story out of the park, and feeling so deeply that it was a really important story to tell.

“Yeah,” she added, definitively. She was in.

Berinstein’s enthusiasm for a project can be as diverting as her personable affect, which is gracious and warm. Her office is decorated with window cards from her shows and other theater paraphernalia. When we meet, she’s wearing a white down vest over black athletic clothing. She’s ridiculously unpretentious.

There’s nothing fuzzy-wuzzy, however, about her bona fides as a producer and entrepreneur. Raised in Los Angeles, she was educated at Smith, the Kennedy School at Harvard and the Yale School of Drama. A brief stint as an investment banker earned her strategic planning jobs at NBC and Paramount Pictures before she joined indie studio and distributor Vestron Pictures. She and her husband, Mitchell Cannold, were executive producers on Vestron’s biggest hit, 1987’s “Dirty Dancing.”

The Jennifer Grey/Patrick Swayze steamer set in a Poconos resort was a natural fit: It was a movie with a strong liberal message, but it wasn’t spinach.

“It was an issue movie in such a big way,” said Berinstein, who is 58. ‘Dirty Dancing’ was fresh, the dance sequences were sexy and thrilling, and it was all done on the cheap.

“We had to be really clever and figure out how to do a lot from a little.” Budget: $6 million. Worldwide gross: $170 million.

“Where did that come from?” I asked.

“My parents were not in the entertainment business at all and were not really political people, but felt very strongly about social justice,” she said. “That had to be part of my life and it had to infuse my work life.

“I do think that has something very much to do with being Jewish,” she added, “because that’s a cultural kind of standard. I wasn’t unique in our community, I wasn’t unique at Wilshire Boulevard Temple in Los Angeles in being motivated to make the world a better place for my kids.”

“’The Prom’ is the perfect show for Dori, because she’s about family,” says Jim Freydberg, a producer who finally provided Berinstein with entrée into the hermetic and almost entirely male New York theater world. “Artists want to work with her. She’s not an artist – which for a producer can be a very good thing. She knows talent.”

Freydberg had a reputation for backing risky, socially-conscious work, including the dramas of South African playwright Athol Fugard. His first project with Berinstein was 1993’s “Fool Moon,” an evening of meta-clowning by Bill Irwin and David Shiner that began as part of New York’s Serious Fun! festival before moving to an acclaimed run at the Richard Rodgers Theatre.

It was a Broadway play – with no words.

Berinstein and Freydberg would soon join forces with circus producer Ken Feld to adapt the Tom Hanks comedy “Big” as a Broadway musical. (They called their partnership Pachyderm Entertainment.) Expectations were high, and so was the $10 million budget which included backing by the Fifth Avenue toy store, FAO Schwarz. But the show was a fizzle and closed at a loss in 1996 after less than six months.

On her own, and through her company, Dramatic Forces, Berinstein has co-produced significant revivals (Arthur Miller’s “The Crucible”; Edward Albee’s “Who’s Afraid of Virginia Woolf?”) along with new work marked by a balance of issues and entertainment, including “Millie,” based on the Julie Andrews film, and another screen-to-stage transfer, “Legally Blonde.” That show had a rocky Broadway run but has proven to be a hit on tour; in 2011 the London production won three Olivier awards, including Best New Musical.

Which brings us to “The Prom,” which had an initial, enthusiastically reviewed run two seasons ago at the Alliance Theatre in Atlanta. The $13.5 million production is, Berinstein says, “so lean and mean” (in an era where musicals have hit the $20-million-plus stratosphere), and boasts a cast lead by Broadway veterans Beth Leavel, Brooks Ashmankas, Christopher Sieber and Michael Potts, along with a brace of younger hoofers to execute Nicholaw’s high-energy dances. The grown-ups playing the narcissistic New York actors are having a field day, chewing the scenery (and probably serving as terrible role models for juveniles).

The location eventually was moved from the Deep South to the Midwest. “For quite a while it was in Mississippi,” says the composer, Matthew Sklar. “We changed the location after the anti-LGBTQ laws came in Indiana under then-Governor Mike Pence.”

I asked Sklar which song told him he’d really gotten the show’s message. An Act I duet between the two girls, he said, called “Dance With You.”

“It was written relatively early,” he recalled. Beguelin had sent him the lyric from Paris. “I read it, and teared up and went to the piano and wrote it quickly. We were in Dori’s office when I played it for Casey over the phone and he cried. We knew this was an important moment in the show.”

Since taking on “The Prom,” Nicholaw has become one of Broadway’s busiest director/choreographers. His most recent work includes another teen-centered “issue” show, “Mean Girls.” Berinstein and Nicholaw argue that the shows are different and anyway, there’s space for both on Broadway when so many shows are targeting younger and broader audiences.

For Dori Berinstein, “The Prom” remains, to use an abused phrase, a passion project.

“We did our first lab presentation of ‘The Prom’ a week after marriage equality passed,” she said. “So, people were like, well, this is a charming story that, you know, isn’t really relevant anymore. Yet it is certainly relevant now. It’s, um, urgent.

“This has been a joyful process,” she added. “I feel very strongly that art has the power to change the way people see the world. I can’t imagine anything more important than helping the world be more accepting of people who are different than they are. It’s the perfect example of who I wanted to be in my career.”

“The Prom” is running at the Longacre Theatre, where it officially opens on November 15.

For Dori Berinstein, ‘The Prom’ Is A Heartland Show With A Jewish Soul