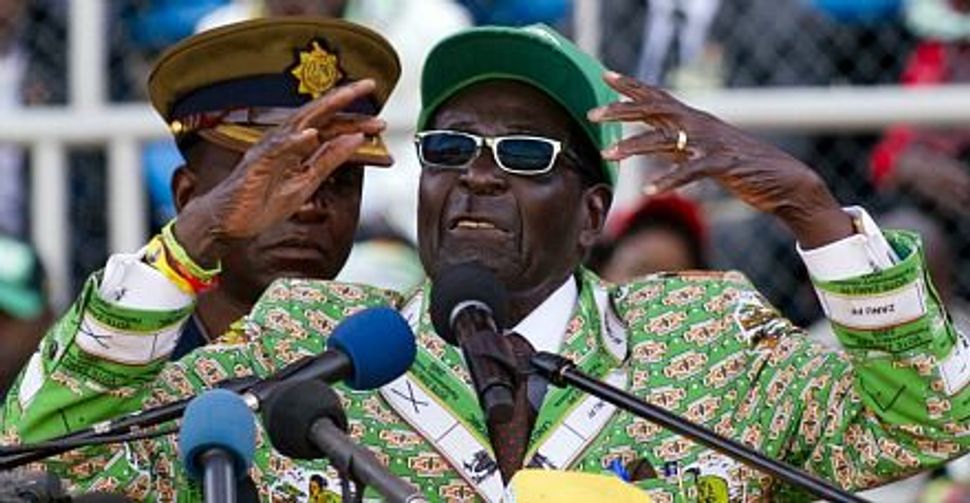 Military leaders in Zimbabwe have proclaimed that they are in control of the the southern African nation and that longtime strongman Robert G. Mugabe is safe and under their protection, a euphemism for house arrest. Here is our report on an Israeli company credited with helping him rig the most recent election there.

You could probably forgive the proprietors of Nikuv for feeling slightly giddy after the final results of Zimbabwe’s election were announced this weekend.

The Israeli company’s client, President Robert G. Mugabe, romped home with 60% of the vote and his ruling ZANU-PF party grabbed more than two-thirds of the seats in the troubled southern African nation’s parliament.

Mugabe, 89, turned back a challenge from longtime rival Morgan Tsvangirai and his Movement for Democratic Change party, beating the former trade union leader by about 1 million votes, according to official results.

Even better, there was none of the violence or blatant intimidation that marked past elections, like the 2008 vote that Tsvanigirai won and also led to widespread chaos and international condemnation.

So how did Nikuv, a shadowy company headquartered the Israeli town of Herzliya, play such a central role in the vote in a farflung African land?

Why did Nikuv CEO Emmanuel Antebi, and top aide Ammon Peer reportedly jet into the capital of Harare for 90 minutes of valuable face time with Mugabe on Tuesday, just hours before the polls opened?

The opposition and independent watchdogs say it’s because Nikuv was a vital cog in Mugabe’s strategy to massively rig the watershed election and maintain his grip on power.

The strategy apparently succeeded beyond anyone’s wildest dreams, with Mugabe and ZANU-PF running up never before seen vote totals in some areas. In some urban constituencies, ZANU-PF increased its vote 10 and 20-fold. In rural areas, some districts recorded more votes than the adult population.

So how did Nikuv do it?

The company has been working for several years to with the country’s notoriously partisan Registrar General, Tobaiwa Mudede. His office controls the production of all identity documents, like national ID cards, passports, licences, and — you guessed it — voter registration forms.

ZANU-PF has long used the voter’s roll as a political tool to disenfranchise voters in the opposition’s urban strongholds and inflate its own support in the country’s vast rural hinterlands.

After being stung by defeat five years ago, ZANU-PF apparently went back to the drawing board to make sure the people never got the chance to vote it out of office for good.

While the MDC was distracted by the task of trying to stabilize the country’s economy (and enjoying the newfound perks of office, cynics say), ZANU-PF was using the tools Nikuv provided to lay the groundwork for this week’s ‘landslide.’

A voter registration campaign was a barely disguised ZANU-PF get out the vote rally. In rural areas, thousands were signed up overnight while urban voters were forced to wait for hours as partisan workers took up to 30 minutes to process each application.

By the time elections were called, 99.6% of rural voters were registered, while just 67% were signed up in the cities and towns, according to the independent Zimbabwe Election Support Network. So the giant and enthusiastic rallies that Tsvangirai drew (including a final one in Harare that was probably the biggest political gathering since Mugabe’s triumphal first victory rally in 1980) were probably mostly attended by those who had no way influencing the outcome.

On election day, nearly 1 million urban voters were turned away from the polls.

Nikuv gave ZANU-PF plenty of cards to play with. The Zimbabwe Electoral Commission printed 35% more ballots than there are registered voters, compared to the global standard of 5%. That number raised hackles even among normally pliant African Union election observers.

Some insiders claim thousands of ballots with neatly pre-filled out ZANU-PF votes were simply added to the totals in certain wards. Extra polling stations were set up that were only known to ruling party supporters.

As the scale of the debacle emerges, Tsvangirai is crying foul and the MDC is vowing to continue its uphill battle for democracy in a country that has known only one ruler in the 33 years since independence. (It might have considered fighting for common sense reforms like eliminating the voters roll and making voting based on a national ID card while it had a share of power, but hindsight is always 20/20).

Secretary of State John Kerry has said the election results do not reflect the will of the Zimbabwean people. That may mean Zimbabwe has little chance of unlocking the Western support that it desperately needs to rebuild its economy, still teetering from decades of mismanagement and a disastrous plan to drive white commercial famers off their land.

But Mugabe will now likely serve as president till he’s 95 — or dies in office.

And that’s why Nikuv’s bosses will likely be flying back to Tel Aviv with a lucrative new contract in their pocket — signed, sealed and delivered.

Zimbabwe Ready or Not. 3 RIGGING from Zimages on Vimeo.