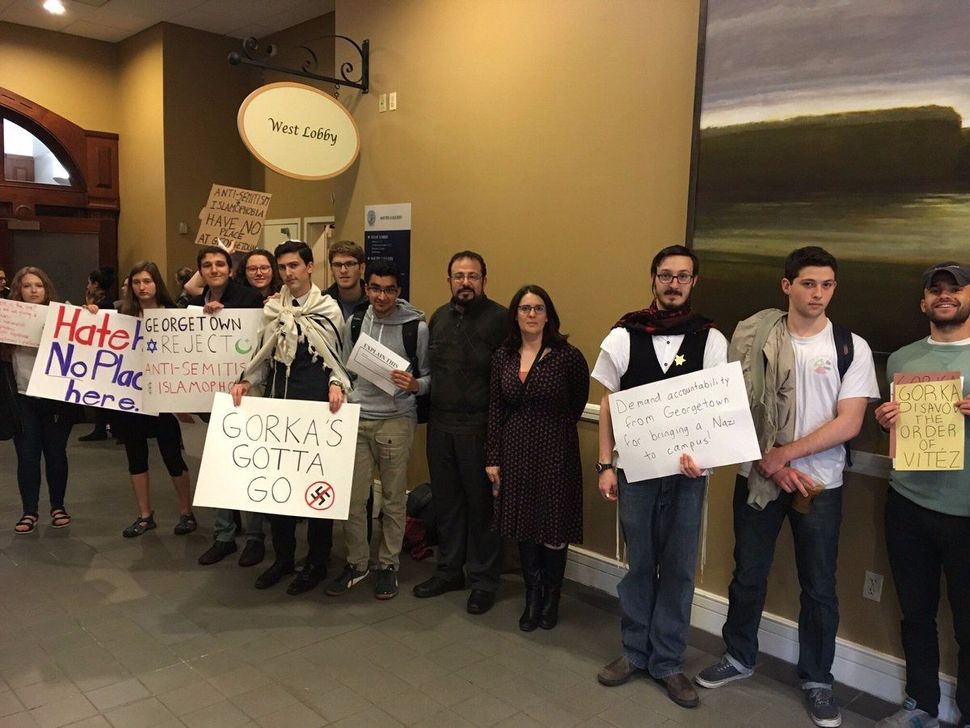 Right-wing bloggers and activists are criticizing Georgetown University students who protested an appearance on campus by Sebastian Gorka, the White House counterterrorism adviser who has been dogged by accusations that he is a member of a far-right Hungarian group with historical ties to Nazism.

Gorka bolted from a panel discussion on cybersecurity and “fake news” 20 minutes before its scheduled conclusion after audience members waved signs silently, and some asked pointed questions.

In response, the students were denounced on Twitter, including by David Reaboi, a national security consultant who has frequently defended Gorka in articles and interviews.

Hey, you repulsive faker: a tallis isn’t a Jewish Social Justice Scarf for you to use as a prop. #astroturf https://t.co/E5CFQTC7fV

INSANE: @Georgetown has a guy dress up as an Orthodox Jew (w yellow Star of David!) to call Gorka a “Nazi”— talk about offensive. pic.twitter.com/jn1WaqFrtS

Also criticizing the timing and Jewish credentials of the protesters was Alex VanNess of the Center for Security Policy, a far-right think tank on whose radio show Gorka has made numerous appearances:

Someone needs to tell that student that a tallis has religious significance & it’s kinda of offensive to use it as a Social Justice prop. https://t.co/mTzAM4AOBr

Center for Security Policy consultant Nick Short said that the protesters were “idiots” who may have been paid to protest Gorka.