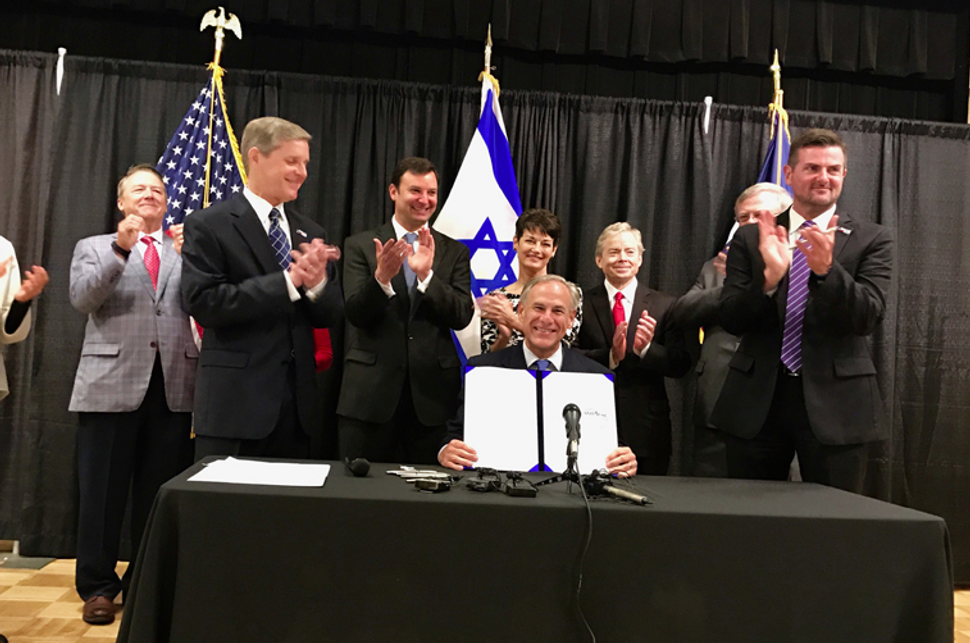 Texas Gov. Greg Abbott signs an anti-BDS law at the Austin Jewish Community Center. Image by Office of the Governor of Texas

Texas Gov. Greg Abbott signed a law on Tuesday that prohibited state agencies from contracting with companies that boycott Israel.

“You can always count on Texas,” Abbott said at the signing ceremony at the Austin Jewish Community Center. “Any anti-Israel policy is an anti-Texas policy.”

The law, known as HB 89, charges the Texas Comptroller’s Office with making a list of “all companies that boycott Israel” and provide the list to state agencies. Those agencies will then be barred from contracting with those companies. State pension funds are also prohibited from being invested in firms involved in the Boycott, Divestment and Sanctions (BDS) campaign against Israel.

It also applies to individuals who do business with state agencies as they are often legally contractors.

Texas is now the 17th state to pass such a law, with other such states ranging from California to South Carolina. New York Gov. Andrew Cuomo implemented a similar measure by executive order.

Civil liberties groups object to most of the laws, claiming they restrict companies or individuals from exercising their First Amendment rights to take a political stand against Israel or its occupation of Palestinian lands.