What Else Shmuley Boteach Revealed On Stephen Bannon’s White Board 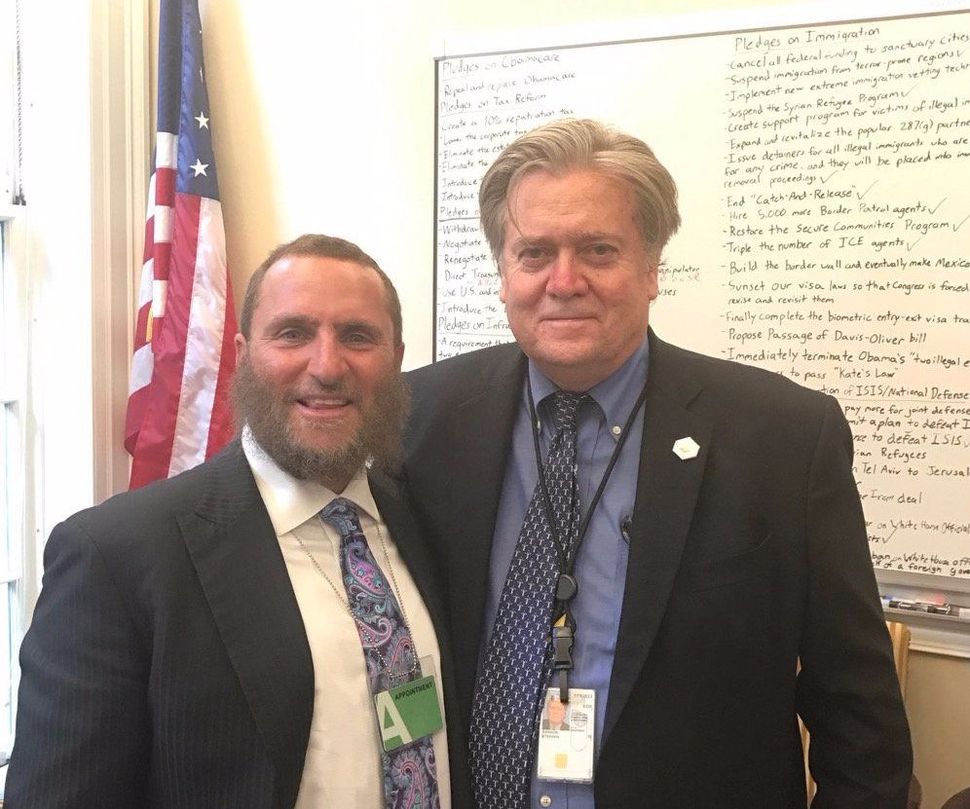 Rabbi Shmuley Boteach and Steve Bannon pose for a photo at the 2017 White House Yom Ha’atzmaut party. Image by Twitter

(JTA) — The man who calls himself “America’s Rabbi” revealed the agenda of America’s most powerful nationalist in a photo op with Stephen Bannon.

Shmuley Boteach, an author, speaker and adviser to several celebrities, tweeted a photo of himself with Bannon, President Donald Trump’s chief strategist, on Tuesday. This is not the first time that Boteach, who ran for congress as a Republican in 2012, has posted a photo with Bannon — the driving force behind immigration policies that triggered nationwide protest and the former executive chairman of Breitbart News, the far-right news site.

With @SteveBannon in the White House on #israelindependenceday. Steve is a great, stalwart friend of the Jewish State pic.twitter.com/PFxSCK7blc

Bannon, who leads the so-called “nationalist” bloc of Trump advisers, famously has an itemized agenda of goals handwritten on a whiteboard in his office. And because that whiteboard was the backdrop for Boteach’s photo, it is now (partially) the world’s to see.

Also on Bannon’s list? The words “Iran deal” and “Tel Aviv to Jerusalem.” These presumably refer to Trump’s pledges to move the U.S. embassy in Israel from Tel Aviv to Jerusalem, and to scrap or renegotiate the 2015 agreement on Iran’s nuclear program. Neither has happened yet.

What Else Shmuley Boteach Revealed On Stephen Bannon’s White Board