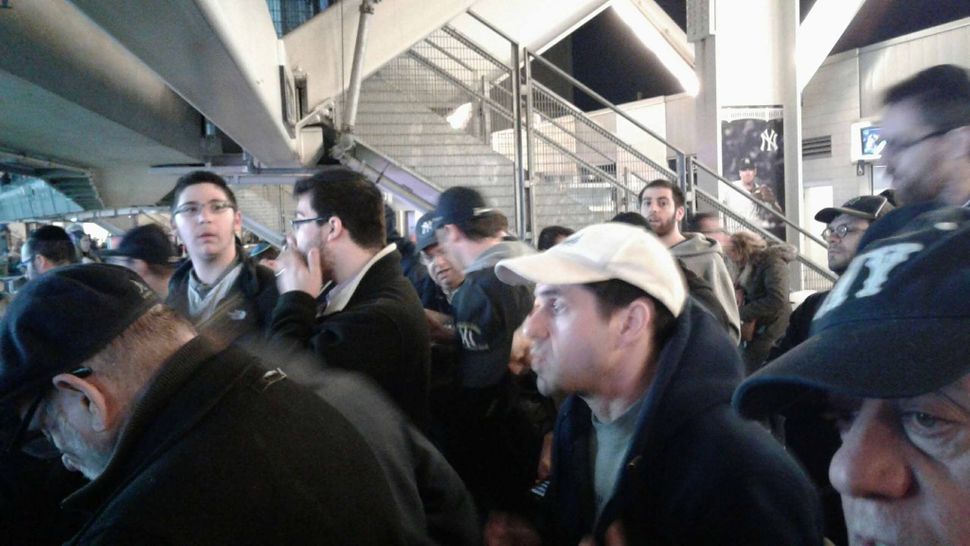 Yankee Stadium’s minyan on May 3, 2017 Image by Courtesy Samuel Weiss

The New York Yankees played the Toronto Blue Jays the evening of May 3 in Yankee Stadium, and because of a special promotion with Mastercard, some tickets were available for only $5. According to one Orthodox attendee, Samuel Weiss, these low prices have brought some unexpected traffic to the unofficial “Jewish Quarter” of the stadium:

“Not to promote stereotypes, but it’s a 5 dollar game at Yankee Stadium and the upper deck maariv minyan has 100 people at it…” Weiss posted on Facebook. Maariv is the Jewish evening prayer — many observant men recite the prayer daily in the presence of a minyan, a quorum of 10 or more Jewish men. It seems their prayers weren’t in vain, either: the Yankees beat the Blue Jays 8-6.

According to the prayer quorum-finding site goMinyan, this group regularly meets during the 7th inning stretch next to the kosher hot dog stand. Here’s a video of a typical crowd.