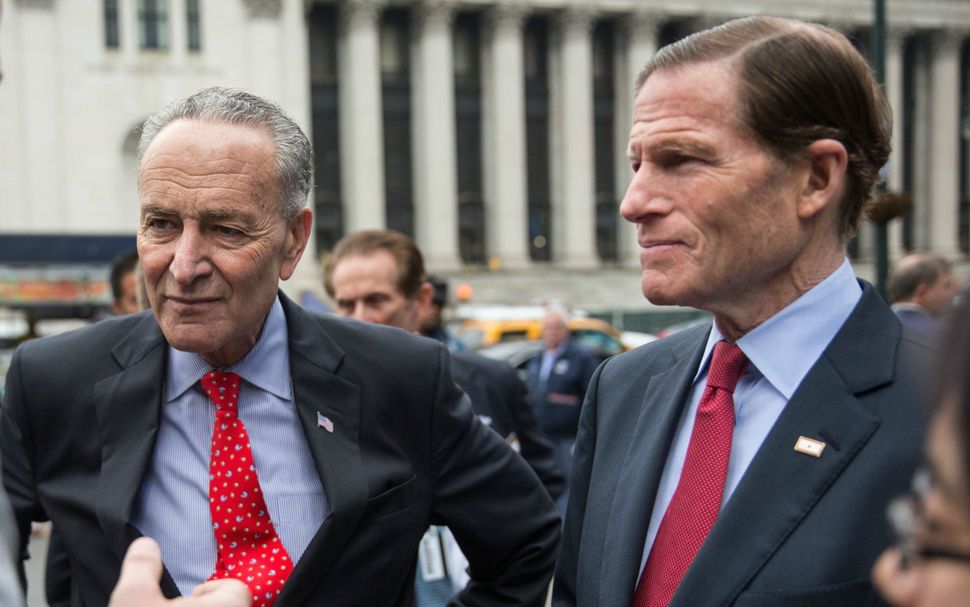 President Trump unleashed on Chuck Schumer and Richard Blumenthal on Wednesday and Thursday, mocking the Northeast Democratic senators for supposedly crying after both spoke out against the White House’s firing of FBI Director James Comey.

Cryin’ Chuck Schumer stated recently, “I do not have confidence in him (James Comey) any longer.” Then acts so indignant. #draintheswamp

The tweet about Schumer referenced his tearing up back in January, when he gave a speech denouncing the president’s “Muslim ban” – now tied up in court. “Cryin’ Chuck Schumer” is a change from that time, though, when he called the New York senator “Fake Tears Chuck.”

Watching Senator Richard Blumenthal speak of Comey is a joke. “Richie” devised one of the greatest military frauds in U.S. history. For….

years, as a pol in Connecticut, Blumenthal would talk of his great bravery and conquests in Vietnam – except he was never there. When….

caught, he cried like a baby and begged for forgiveness…and now he is judge & jury. He should be the one who is investigated for his acts.

Those tweets referenced Blumenthal embellishing his record in the Vietnam-era military, when he served as a reservist in a domestic context. Trump received multiple deferments for military service while the war was on.