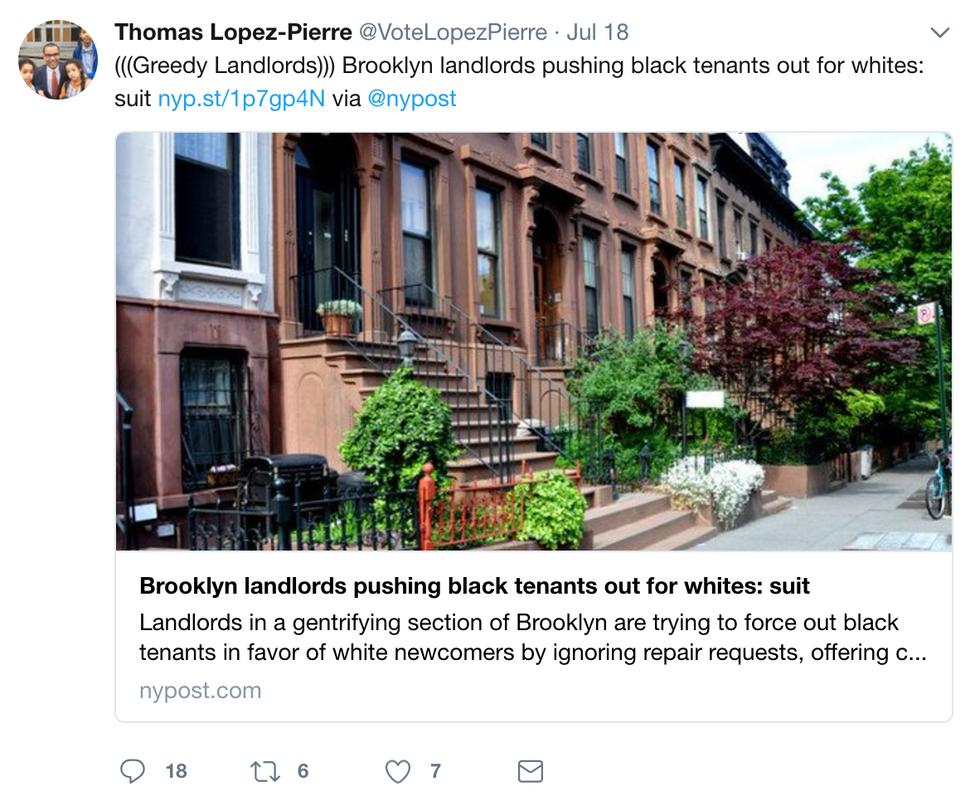 A July 18 tweet from Lopez-Pierre, a day after tweeting “I have agreed to NO longer use the words: ‘Greedy Jewish Landlords’.” Image by Twitter

Less than two hours after agreeing to stop using the phrase “Greedy Jewish landlords” on Twitter, Thomas Lopez-Pierre, a candidate for New York City Council, has taken to using the (((echoes))) popularized by Holocaust deniers and the “alt-right.”

On Monday afternoon, Lopez-Pierre, who is a candidate for a district in Manhattan comprising the Harlem and Washington Heights neighborhoods, tweeted, “After discussions with my Jewish supporters, I have agreed to NO longer use the words: “Greedy Jewish Landlords”.”

Later that afternoon, Lopez-Pierre sent out a tweet that contained the infamous (((echoes))) around the phrase “Greedy landlords”: “(((Greedy Landlords))) ‘Preferential Rent’: How Landlords Kill NYC’s Affordable Apartments and Get Away With It.” Lopez-Pierre’s tweets containing (((echoes))) have been liked and retweeted by “alt-right” Twitter users.

Lopez-Pierre is running against the incumbent Mark Levine, who is Jewish. He has a history of making anti-Semitic comments and until recently had a section of his website that said, “Jewish Landlords… are at the forefront of ethnic cleansing/pushing Black/Hispanic tenants out of their apartments.”