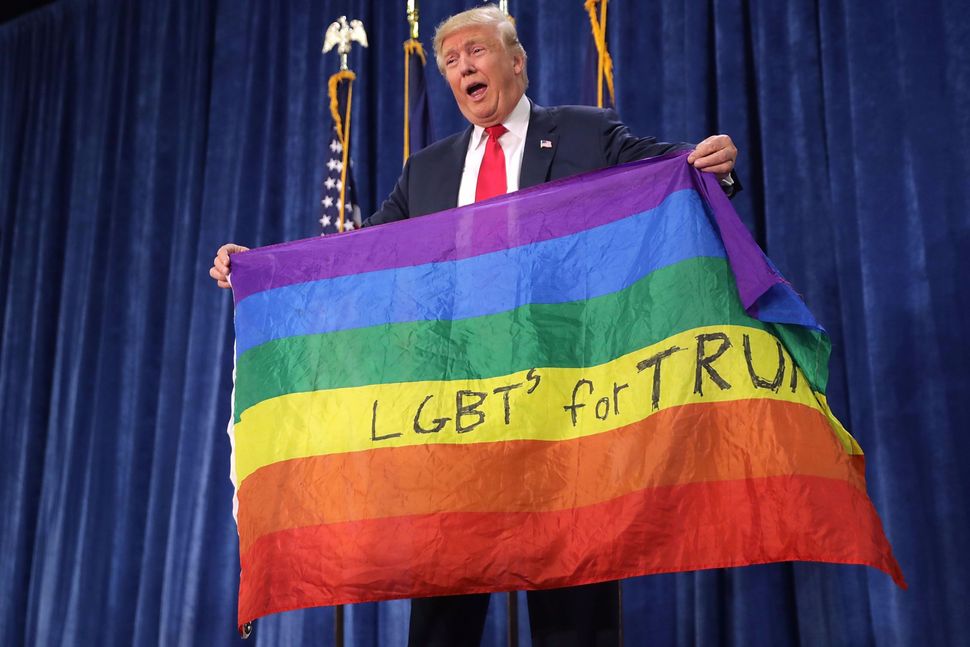 Trump at a campaign rally in Colorado in October 2016. Image by Getty

Leaders of Jewish LGBTQ organizations slammed President Trump’s decision to ban transgender people from serving in the military as a “despicable” step back for equal rights.

Trump shocked the nation by unexpectedly revealing the new policy, which will affect the estimated 6,000 transgender individuals now employed by the armed forces.

After consultation with my Generals and military experts, please be advised that the United States Government will not accept or allow……

….Transgender individuals to serve in any capacity in the U.S. Military. Our military must be focused on decisive and overwhelming…..

….victory and cannot be burdened with the tremendous medical costs and disruption that transgender in the military would entail. Thank you

“It’s a despicable act by a cowardly president who is continuing his attack on all Americans,” said Rabbi Sharon Kleinbaum, leader of Congregation Beit Simchat Torah, an LGBTQ synagogue in New York City. “We are outraged at the attempts to ban transgender individuals from serving in the military.”

“Anyone who wants to put on the uniform, risk their lives and defend Americans and our freedoms should be allowed to,” Brooks wrote.

Many current and former LGBTQ soldiers in the U.S. military have spoken out against Trump’s decision.

“The same tired trope suggesting that transgender service-members will destroy unit cohesion and readiness was used against gay and lesbian service-members like me, and was used against African-Americans before me,” James Moon, a Navy veteran and board member for the pro-Israel LGBTQ group A Wider Bridge, wrote in a statement from the organization.