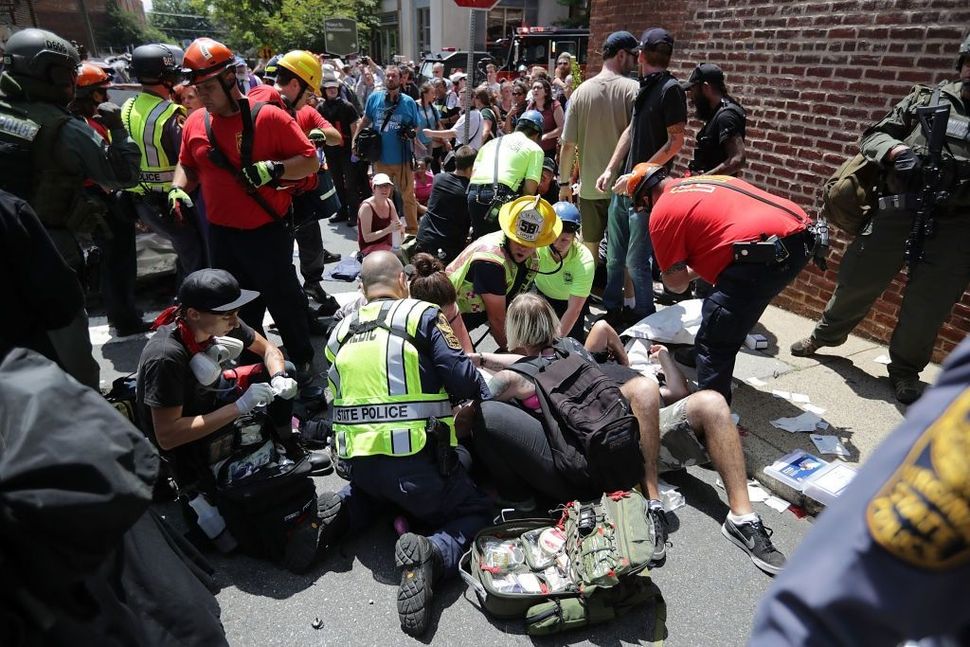 (JTA) — CHARLOTTESVILLE, Va. (JTA) — A car traveling at a high speed plowed through a crowd during protests against a white supremacist gathering, killing one person and injuring at least five.

At least one of the injured was in critical condition, sources close to law enforcement told JTA on Saturday. A JTA reporter counted at least eight injured, although several of these suffered minor wounds and were treated at the scene. Security sources said a man was in custody and that the FBI was sending agents to the city, although a motive was not yet clear.

Some 500 white supremacists, believed to be the largest gathering in recent history, gathered in Emancipation Park on Saturday in the university town’s center to protest plans by the city, a liberal enclave in central Virginia, to remove a statue of Confederate Gen. Robert E. Lee. (The park was previously known as Lee Park.)

Protesters and counterprotesters started throwing things at one another, including plastic bottles and gas bombs, and at one point the two groups charged one another and there were tussles. Virginia Gov. Terry McAuliffe declared a state of emergency and police asked the white supremacists to move. The organizers of the supremacists group were unclear about where to go and dispersed to different parts of the city.

Although the focus of the white supremacists ostensibly was on preserving symbols of the confederacy, there were overt expressions of Nazi sympathy, including swastika flags, and signs that said “The Jewish media is going down.”

President Trump condemned the violence, but appeared to blame all sides. “We condemn in the strongest possible terms this egregious display of bigotry hatred and violence on many sides,” he said at an impromptu press conference.

Trump has made a point of naming Islamic radicals as responsible for terrorist attacks even before the full details are known.