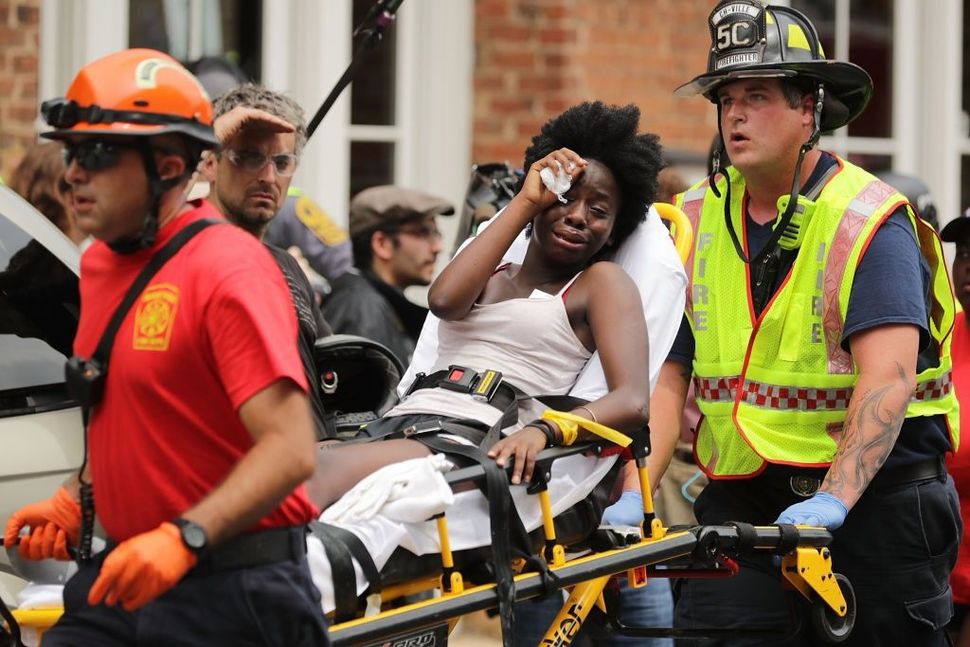 Rescue workers move victims on stretchers after a car plowed through a crowd of counter-demonstrators against a white supremacist rally in Charlottesville, Virginia. Image by Getty Images

CHARLOTTESVILLE, Va. (Reuters) – U.S. authorities will investigate the violence stemming from a white nationalist rally on Saturday that killed one person, injured more than 30, and challenged President Trump’s leadership.

Four people were arrested in the violence, including James Fields, a 20-year-old white man from Ohio being held in jail on suspicion of plowing a car into a crowd of counter-protesters on Saturday, killing a 32 year-old woman and injuring 19, five of them critically.

Police have not yet provided a motive for the incident but U.S. attorneys and the Federal Bureau of Investigation have opened a civil rights investigation into the crash, an FBI field office said.

Federal authorities were also looking into a helicopter crash on Saturday that killed two Virginia state policemen aiding efforts to quell the clashes.

Trump said “many sides” were involved in the Charlottesville incidents, remarks that drew fire from across the political spectrum for not specifically denouncing white nationalists.

“We condemn, in the strongest possible terms, this egregious display of hatred, bigotry and violence on many sides,” Trump told reporters at his New Jersey golf course on Saturday.

The Charlottesville violence is the latest clash between far-rightists, some of whom have claimed allegiance to Trump, and the president’s opponents since his January inauguration, when black-clad anti-Trump protesters in Washington smashed windows, torched cars and clashed with police, leading to more than 200 arrests.

About two dozen people were arrested in Charlottesville in July when the Ku Klux Klan rallied against the plan to remove a statue of Confederate General Robert E. Lee from a public park. Torch-wielding white nationalists also demonstrated in May against the removal.