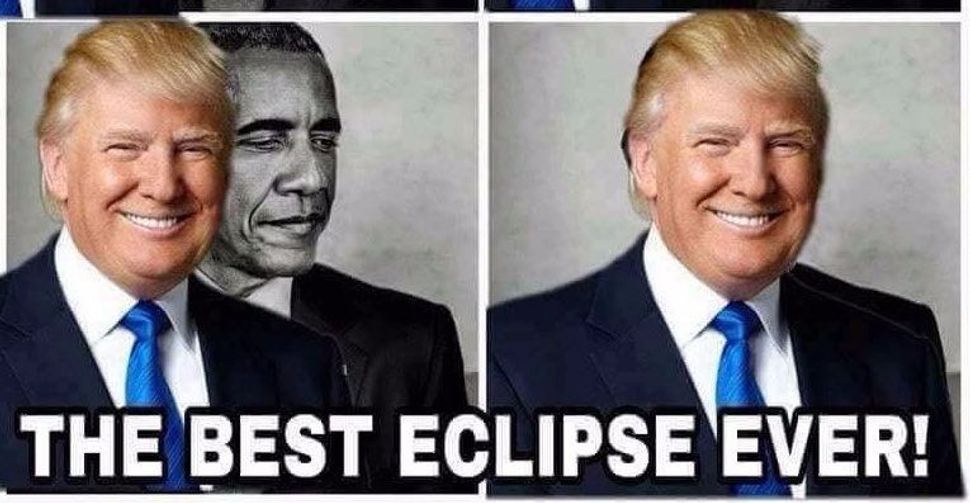 (JTA) — President Trump retweeted a meme of himself “eclipsing” Barack Obama that was posted originally by a Twitter user who had made an anti-Semitic post.

The meme, which the president retweeted Thursday morning, features images of Trump and and his Oval Office predecessor. By the fourth image, Trump’s photo completely covers one of Obama with a caption reading “The best eclipse ever!”

Trump was retweeting Jerry Travone, who had posted an anti-Semitic tweet four days ago. Travone told NBC News that he found the meme elsewhere on social media.

In the anti-Semitic tweet, Travone was responding to a Sky News article titled “One in three Jews thinking of quitting UK” that analyzed a study done by the Campaign Against Anti-Semitism group. The study also found that one in six British Jews felt unwelcome in their home country.

Travone wrote: “We have enough of these jews where I live lol someone else take them. They just can’t drive.”

Trump has been accused of promoting anti-Semitism on Twitter before. During the presidential campaign, he tweeted an image of Hillary Clinton on a background of dollar bills. The tweet also included a six-pointed star with the words “Most corrupt candidate ever!” The tweet was later deleted.

In July, Trump tweeted a video of himself beating up a man with the CNN logo superimposed on his head. The video was traced back to someone who had made anti-Semitic comments on Reddit.