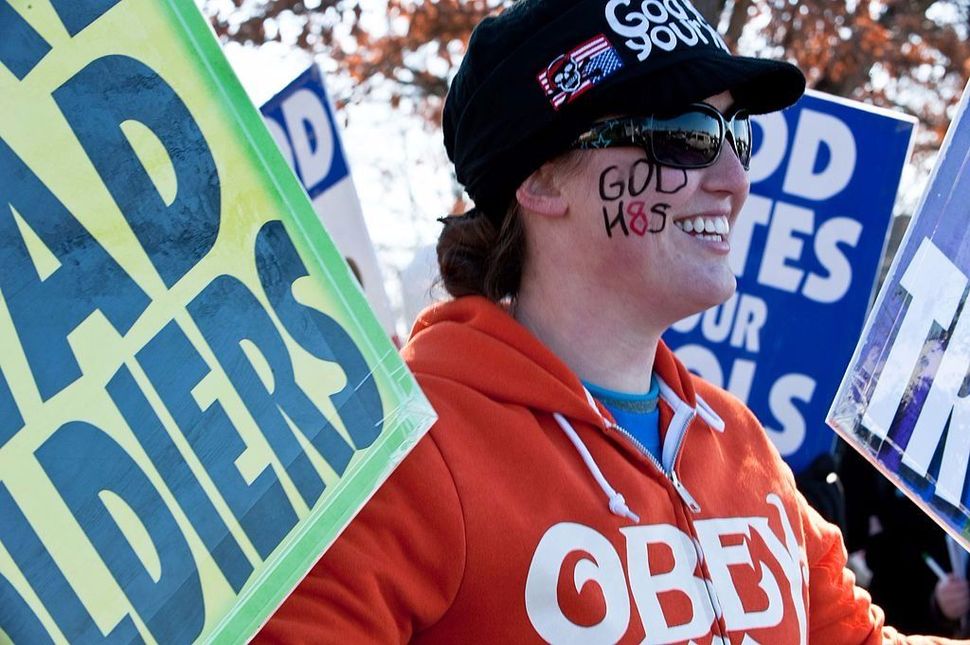 Megan Phelps-Roper was inspired to leave the Westboro Baptist Church after corresponding with a Jew on Twitter. Image by Getty Images

(JTA) — A movie about Megan Phelps-Roper, who left the viciously anti-gay Westboro Baptist Church after a Twitter correspondence with a prominent Jewish blogger, is in the works.

The screenplay for the film, with the working title “This Above All,” will be written by Oscar nominee Nick Hornby. Reese Witherspoon is reportedly one of the producers.

The film will be based on Phelps-Roper’s upcoming memoir and a New Yorker article by Adrian Chen that detailed her extended debate on Twitter and via email with David Abitbol, the Jerusalem-based founder of the Jewish culture blog Jewlicious.

Phelps-Roper’s exit from the Westboro Baptist Church, the Kansas-based congregation notorious for picketing the funerals of gay men and American soldiers killed overseas with signs like “God Hates Fags” and “Thank God for Dead Soldiers,” was facilitated in part by her correspondence with Abitbol, whose name she found on a list of prominent Jewish Twitter users published by JTA in 2009.

Phelps-Roper is the granddaughter of church founder Fred Phelps, who pioneered the church’s radical theology. The church claims that President Barack Obama is the Antichrist and celebrates the AIDS epidemic as God’s strategy to rid the world of the evil of homosexuality. The Anti-Defamation League has called the church a “small virulently homophobic, anti-Semitic hate group.”