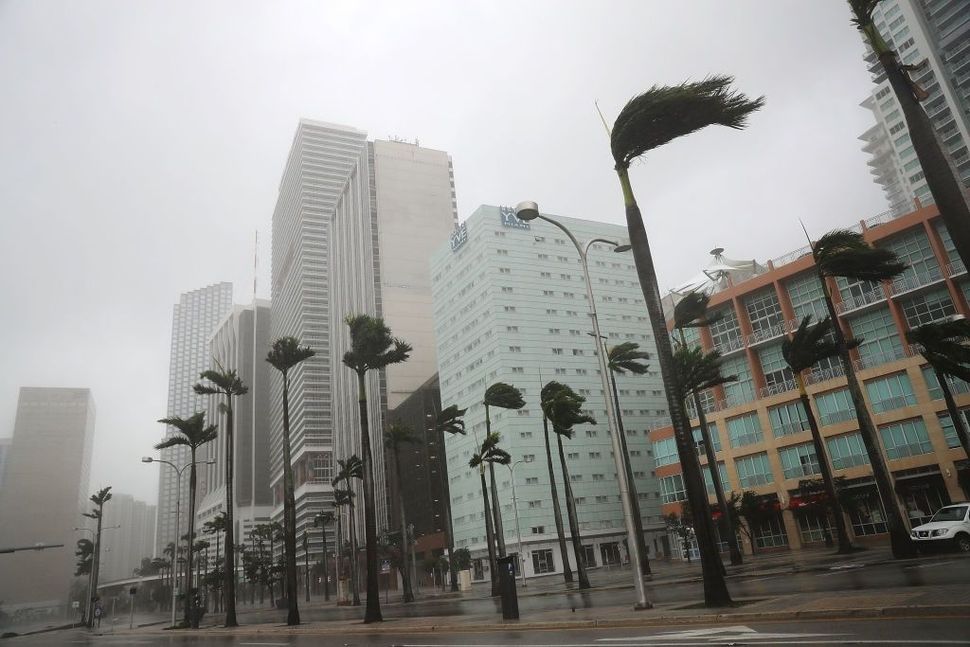 The wind blows and rain falls on Miami during Hurricane Irma. Image by Getty Images

Volunteers with a Jewish funeral society discovered dozens of Holocaust survivors in one Florida condo building who had lasted through Hurricane Irma and its aftermath for days without food, water or power, Yeshiva World News reported.

The Chesed Shel Emes society had received a request to check on an elderly Jewish woman at the Olympic Tower building in North Miami Beach, the report explained. She turned out to be a Holocaust survivor who had been living in unsafe, sweltering conditions after the power went out.

While that woman was being cared for, another volunteer walked through the hallways to check on other residents, and discovered more than 30 survivors in similar predicaments—many also out of medications.

The report explained that volunteers quickly distributed food, water and ice to the residents.

The combination of heat and power outages in North Miami Beach had gotten so bad that 80 residents of an assisted living facility in that city were evacuated on Wednesday due to what city officials reportedly called “power/AC issues.”

Jewish community professionals in South Florida have expressed their frustration that the local power company has not sufficiently prioritized working on restoring power to retirement and assisted-living facilities.