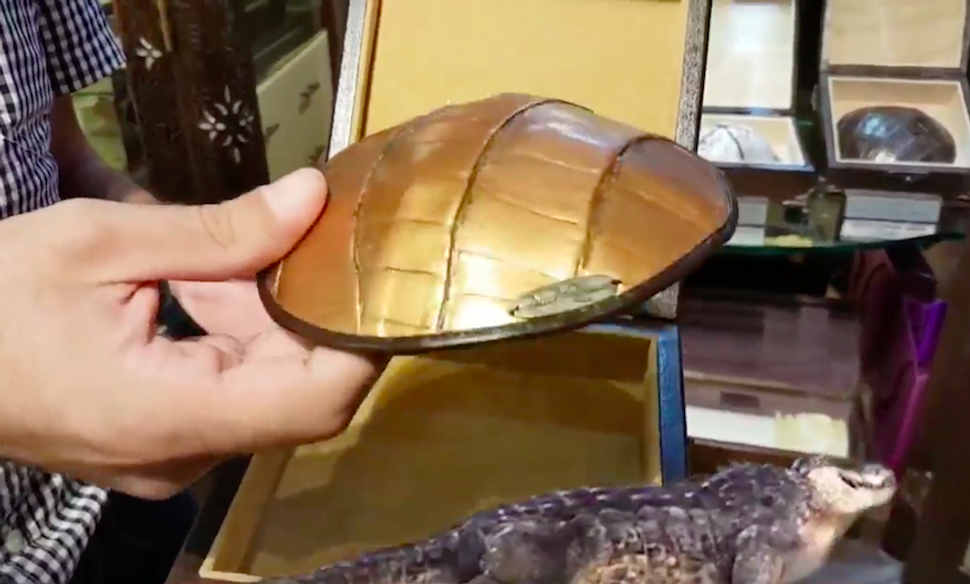 JERUSALEM (JTA) — Curious locals and journalists rushed to a Judaica store in Jerusalem’s Old City to marvel at the new luxury-marketed crocodile, python and cowhide Jewish head coverings. An ostrich edition was said to be coming soon.

But as the hype grew, so did public backlash, and last week, the government confiscated the kippahs as illegally imported wild animal products.

The Fifth Quarter Judaica store owner Eli Mordechai gamely showed off the kippahs, which are sold in fabric-lined oak boxes for as much as $1,400 each. They even come with built-in hair clips. Mordechai touted them as must-have headwear for observant Jews seeking that Russian oligarch look.

“These kippot were born out of the desire to provide people who live in a world of luxury and brands a kippah befitting their lifestyle,” he told Israel’s popular Yedioth Aharonoth newspaper. “A person wearing a $10,000 Gucci suit won’t be caught dead wearing a $50 off-brand kippah.”

Typical kippahs are made from cloth, cotton yarn, velvet or leather.

Yedioth noted that the exotic kippahs are made from unkosher animals. But Mordechai assured the newspaper that unlike teffilin, mezuzahs or Torah scrolls, kippahs can be made from any material according to Jewish law.