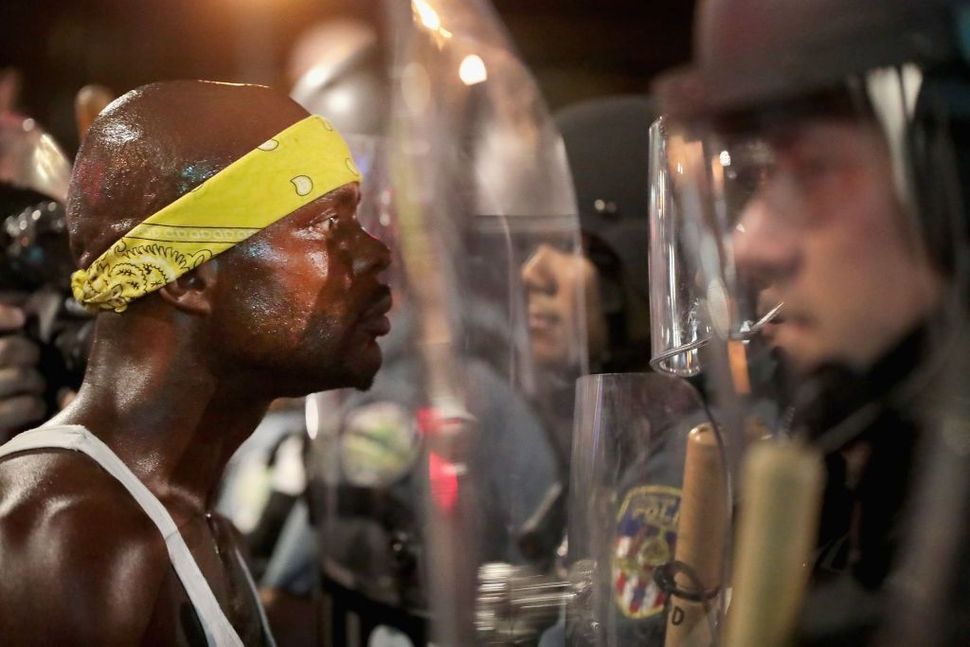 Demonstrators confront police while protesting the acquittal of former St. Louis police officer Jason Stockley on September 16, 2017 in St. Louis, Missouri. Dozens of business windows were smashed and at least two police cars were damaged during a second day of protests following the acquittal of Stockley, who was been charged with first-degree murder last year following the 2011 on-duty shooting of Anthony Lamar Smith. Image by Getty Images

(JTA) — A synagogue in St. Louis opened its doors to provide sanctuary for protesters demonstrating against the acquittal of a white policeman for the killing of a black suspect after police efforts to control the protesters led to violence.

After St. Louis Metropolitan Police officers reportedly surrounded the Central Reform Congregation on Friday night and threatened to fire tear gas at the protesters inside, a trending Twitter hashtag called on the police to #GasTheSynagogue.

On Friday night following the verdict, some 1,000 protesters marched through the streets of downtown St. Louis in protest of the verdict. Riot police pushed at protesters and used tear gas.

In 2014 the synagogue, led by Rabbi Susan Talve, served as a sanctuary space for protesters after a grand jury decided not to indict Ferguson, Missouri police officer Darren Wilson in the August shooting death of 18-year-old Michael Brown.