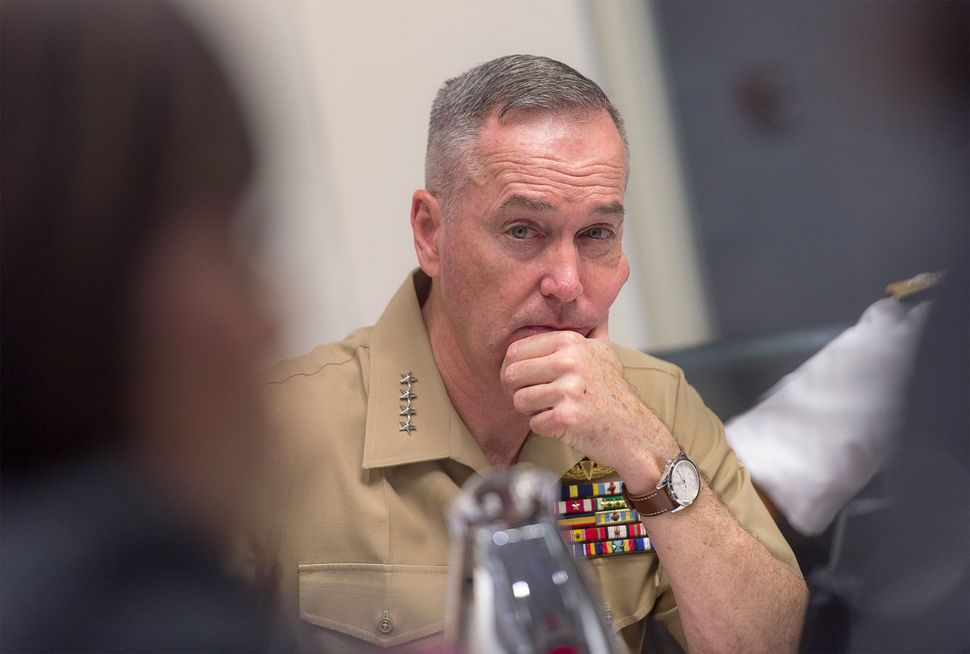 Marine Corps Gen. Joseph F. Dunford Jr., chairman of the Joint Chiefs of Staff, listens during a meeting with military leaders from South Korea and Japan. Image by Department of Defense

WASHINGTON (Reuters) – The top U.S. military officer said on Tuesday that Iran was complying with the pact curbing its nuclear program and warned that any American decision to walk away from it would make other nations less likely to enter into agreements with the United States.

President Trump is considering whether to withdraw from the 2015 nuclear deal between Iran and world powers, calling the accord an “embarrassment.”

Gen. Joseph Dunford, chairman of the Joint Chiefs of Staff, told the Senate Armed Services Committee that Iran was complying with its obligations under the nuclear deal, but had increased its activity in other areas.

The committee’s top Democrat, Sen. Jack Reed, asked Dunford whether walking away from the Iran nuclear pact would affect the U.S.’s ability to negotiate with North Korea or devise a non-military solution toward Pyongyang.

“It makes sense to me that our holding up agreements that we have signed, unless there is a material breach, would have an impact on others’ willingness to sign agreements,” Dunford said.

U.S. officials, including senior military leaders, have said that the first option to deal with the threat posed by North Korea’s nuclear and ballistic missile program is through diplomacy.

If Trump does not recertify by Oct. 16 that Iran is in compliance with the agreement, Congress would have 60 days to decide whether to reimpose sanctions on Tehran suspended under the accord. That would let Congress, controlled by Trump’s fellow Republicans, effectively decide whether to kill the deal.