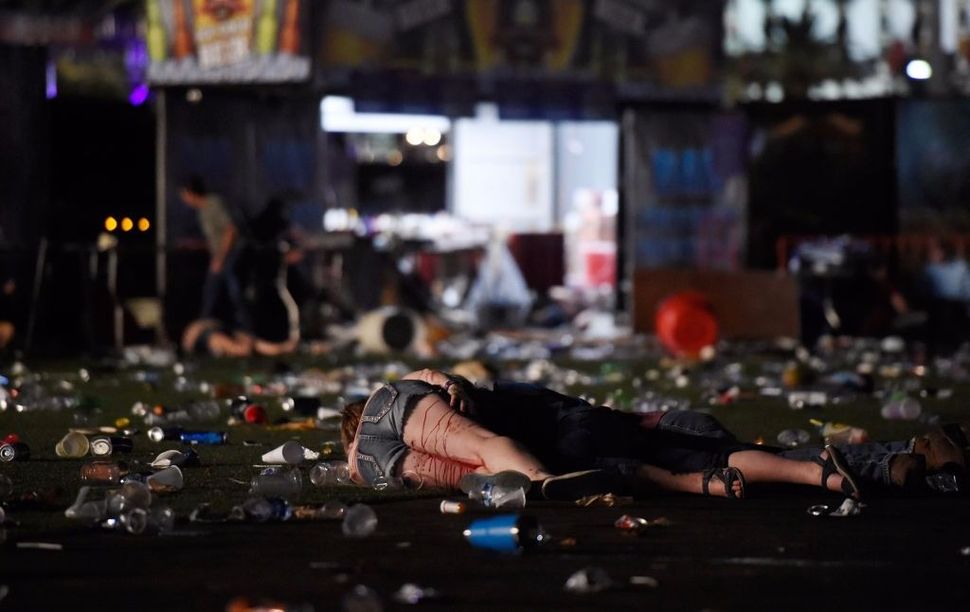 A person lies on the ground covered with blood at the Route 91 Harvest country music festival after apparent gun fire was heard on October 1, 2017 in Las Vegas, Nevada. Image by Getty Images

JERUSALEM (JTA) — Jerusalem Mayor Nir Barkat sent a letter of sympathy and support to the Jewish mayor of Las Vegas.

The letter to Mayor Carolyn Goodman was sent on Tuesday. At least 58 people were killed and more than 500 injured in the attack Sunday night on tens of thousands of people attending a country music festival on the Las Vegas Strip.

“On behalf of all residents of Jerusalem, I send my condolences to you and hte people of Las Vegas following this tragic and deadly attack. Our sympathy and prayers extend to you, the families of the victims, the hundreds of people injured, the residents of Las Vegas, and to all the people of the United States,” the letter said.

Barkat continued: “Jerusalem is unfortunately familiar with the forces of evil and indiscriminate violence that target innocent civilians going about their daily lives. The people of Las Vegas and Jerusalem are strong and resilient. Together, we will show those who seek to threaten our values that they will not win.”

Goodman has been mayor since 2011, a position that was once held by her husband Oscar Goodman.