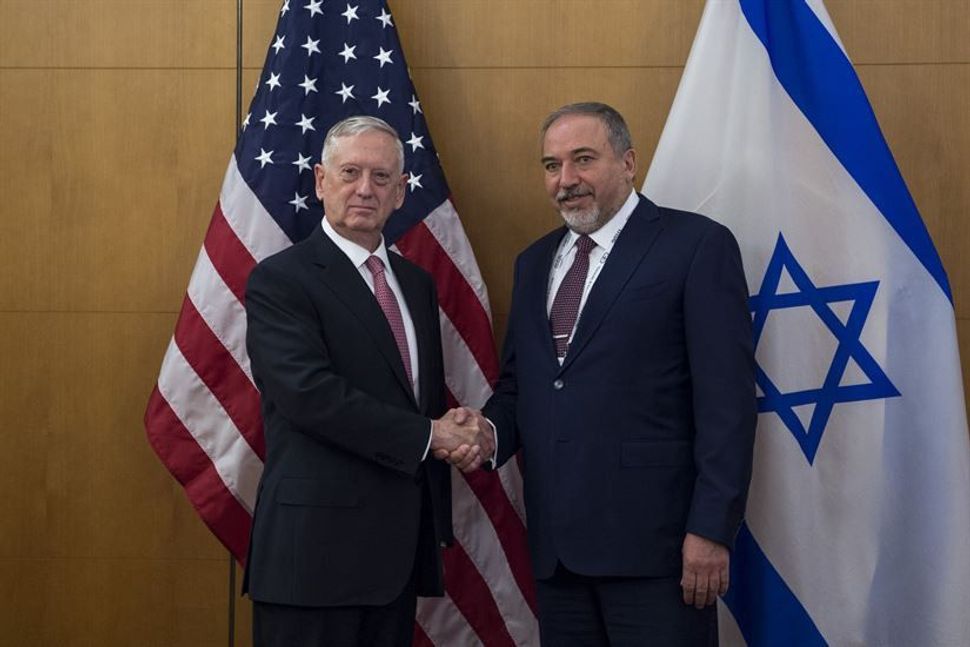 WASHINGTON (JTA) — Israeli Defense Minister Avigdor Liberman, meeting with his counterpart, U.S. Defense Secretary James Mattis, said it was in the best interest of both countries to forge alliances with “moderates” in the Middle East.

“We are facing a lot of challenges in the Middle East, and the real division today, it’s not between Jews and Muslims or Christians, it’s not between Shiite or Sunni, between different religions but between moderate and radical people,” Liberman said Thursday at a photo-op with Mattis on the Pentagon steps. “And we’re also happy to see and we completely support your efforts to establish a coalition of moderate people.”

Mattis, in his own remarks, had referred to “forming working groups that expand and deepen our relationship as new threats and new dynamics come into focus for us.”

Liberman has made it his mission to persuade the Trump administration to focus not only on Sunni extremists, like the Islamic State, but Shiite extremists like the Iranian regime and its proxies. Liberman has expressed concern that the Trump administration has deferred too much to Russia in its Syria strategy; Russia is a de facto ally of Iran in attempting to prop up the Assad regime. Israel fears that Iran, its most recalcitrant enemy, may emerge from its role in the civil war in neighboring Syria with a permanent stake in the country.

But Liberman praised President Trump for the Iran strategy he unveiled last week, which includes reinforcing sanctions against the Iranian Revolutionary Guard Corps and attempting to reshape the 2015 Iran nuclear deal. Israel’s government opposed the deal, which traded sanctions relief for a limited rollback of Iran’s nuclear program.