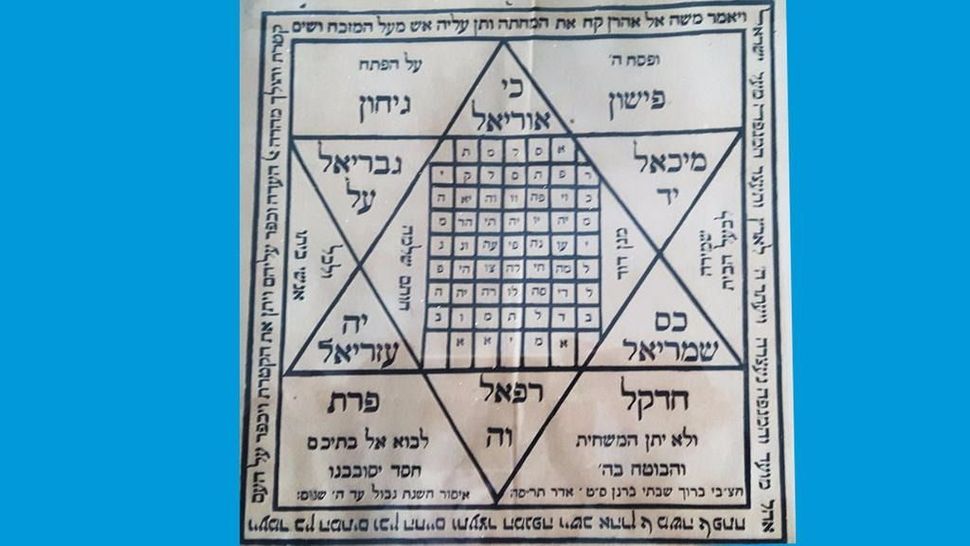 A Reform synagogue in suburban London is in possession of a mysterious amulet — and the synagogue is looking for the public’s help in deciphering it.

Barry Hyman, president of Radlett Reform Synagogue, wrote in the Jewish Chronicle about a graphic of unknown age and origin that was “dumped anonymously in the shul.”

It is believed to be a charm to ward off the evil eye, with references to angels — Gavriel, Michael, Uriel, Shmuriel, Raphael and Azriel — and an entreaty beseeching the charm to be “protecting the Master of the House and his household.”

Hebrew sentences around its border say: “And Moses told Aaron, ‘Take the pan, and pot of fire on it from the altar and place on it incense; go quickly to the community and make atonement for them; and take the incense and make atonement for the people. And stand between the dead and the living and halt the plague.’ And Aaron returned to Moses at the tent of meeting, and the plague was lifted. God allowed himself to be entreated, and the plague ceased from among the Children of Israel.”

But the biggest remaining mystery is the box of Hebrew letters in the center of the Star of David. No rabbis have been able to explain or decipher its meaning.

If you have information about the meaning of the amulet, contact Radlett Reform Synagogue.