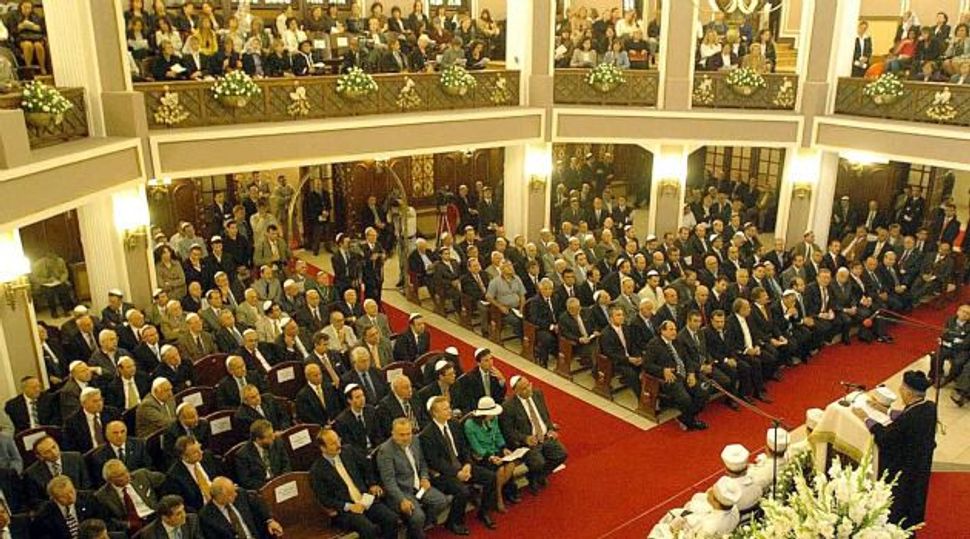 Standing Firm: Turkey?s chief rabbi speaks at Istanbul?s Neve Shalom Synagogue after it was bombed by terrorists. Despite their government?s feud with Israel, Turkish Jews say they still feel welcome in their country. Image by Getty Images

(JTA) — Leaders of the Jewish community of Turkey denied complaints by a gay Israeli diplomat serving in Istanbul, who said they ignore him because of his sexual orientation.

Ishak Ibrahim Zadeh, the president of the Jewish Community of Turkey, responded in a statement Thursday to the complaints leveled at him by Yossi Levi Sfari, Israel’s consul in Istanbul, who moved there with his life partner, Ronny Goldberg, six weeks ago. Levi Sfari said the community failed to invite him to events and does not acknowledge his presence in synagogue.

“We treat the consulate and consul with the utmost respect and do not involve ourselves in anyone’s personal life,” Zadeh was quoted as saying by the Finansgundem daily. “We respect all in the same way that we expect them to respect us as a community that is committed to Halacha and the rules of the Torah. We have nothing against the man or Israel and its envoys, whom we will continue to respect as we maintain good relations with Israel. I do not need to be a close personal friend of the man.”

Zadeh’s statement follows an article published Thursday in Yedioth Aharonoth in which Levi Sfari complained that the community is giving him the cold shoulder, including by not inviting him to read the Torah as is customary in services attended by a senior Israeli envoy. He also said the community have invited Israel’s ambassador in Ankara to attend events in Levi Sfari’s stead.

According to Yedioth Aharonoth, the community urged the foreign ministry to not post a gay man to Turkey when Levi Sfari’s nomination was announced.

The Israeli paper also reported that the foreign ministry had instructed its employees to sever communications with Ibrahim Zadeh over his alleged treatment of Levi Sfari.