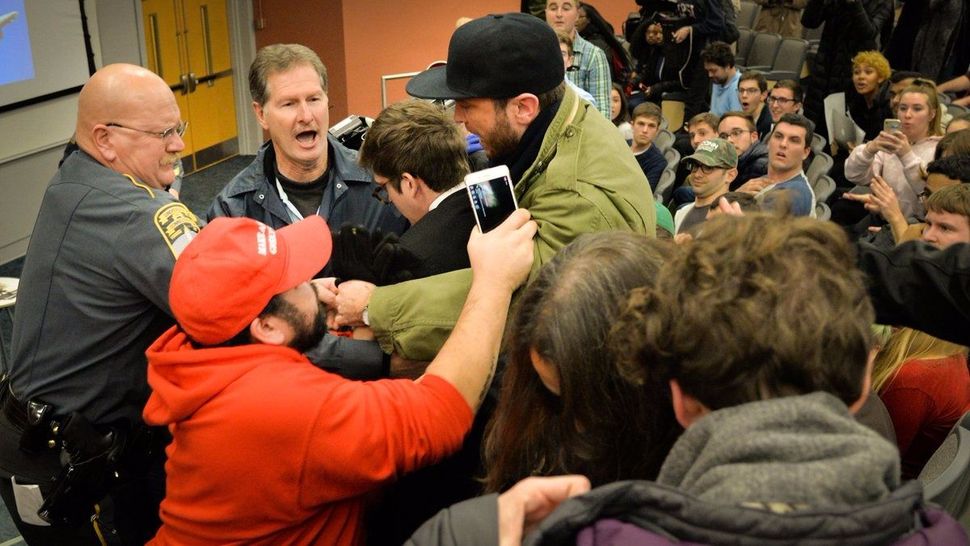 A far right blogger and conspiracy theorist was arrested Tuesday night after he grabbed a woman who protested his speech at the University of Connecticut, the New York Times reported.

Lucian Wintrich, the Washington correspondent for the website The Gateway Pundit, chased the protester through a lecture hall after she appeared to grab a document from the podium.

BREAKING: @lucianwintrich appears to attack a @UCONN student during speech after she took something off podium. pic.twitter.com/WAcNYAak7c


Wintrich was charged with breach of peace, a misdemeanor. He was released late Tuesday after posting the $1,000 bond.

Wintrich’s speech, which was titled “It’s OK To Be White,” was heavily protested by students and local activists.

Adding irony to the entire ordeal, I was arrested for “Second Degree Breach of Peace.” Apparently, “Peace” is anything far left students don’t agree with. SAD! Plenty of great young conservatives in the audience – disappointed that the left wouldn’t let this happen as planned.


Later that night, a student was arrested in connection with a smoke bomb being thrown throw a window into the classroom where Wintrich had been speaking. No one was hurt.

“This was a very disappointing evening,” Susan Herbst, UConn’s president, said in a statement. “Thoughtful, civil discourse should be a hallmark of democratic societies and American universities, and this evening fell well short of that.”