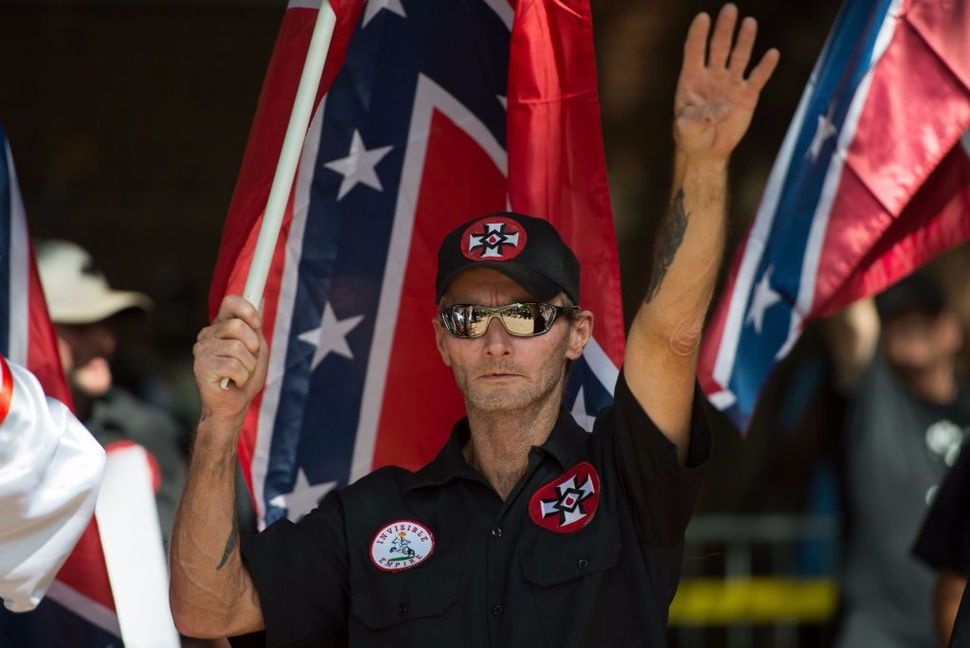 A member of the Ku Klux Klan gestures during a rally, calling for the protection of Southern Confederate monuments, in Charlottesville, Virginia on July 8, 2017. Image by ANDREW CABALLERO-REYNOLDS/AFP/Getty Images

White supremacist organizations are increasingly turning to online crowdfunding campaigns in order to raise money, according to a new analysis by the Anti-Defamation League.

“Crowdfunding is a new money stream for white supremacists that enables them to quickly raise money for specific projects and general support from their followers,” the director of the ADL’s Center on Extremism, Oren Segal, said in a statement. “We need to remain vigilant as white supremacists exploit emerging technologies to fund their activities, and the funding platforms and payment processors have a crucial role to play in this ongoing battle.”

Ever since the August white supremacist rally in Charlottesville, Virginia, which led to the death of a counter-protester, credit card companies, traditional online fundraising services like PayPal and mainstream crowdfunding websites have cracked down on assisting racist organizations. This has led white supremacists to create their own fundraising platforms, such as WeSearchr, Hatreon and GoyFundMe.

Most notably, Andrew Anglin of the neo-Nazi website The Daily Stormer raised nearly $160,000 on WeSearchr to defend himself from a lawsuit alleging that he orchestrated a harassment campaign against a Jewish woman in Montana.

Small amounts of money have been raised from selling merchandise, including using Amazon’s “associates program,” which allows groups to sell items on Amazon through their own websites. “Extremist groups occasionally become Amazon Associates, something that would allow, for example, a white supremacist group to advertise Amazon books related to Nazi Germany on its own website, getting a small amount of revenue each time someone purchased one of those books that way,” the report explained.

White supremacist Kyle Bristow recently announced that his organization, the Foundation for the Marketplace of Ideas, had joined the AmazonSmile program, which allows people to contribute to a charity while making normal purchases on Amazon.

The report emphasized that white supremacist groups are still “poorly financed” and “frequently lose access to means of raising or transferring money that other movements take for granted,” report author Mark Pitcavage explained. “This causes them to rush to exploit new methods that emerge, such as crowdfunding, and to try to create their own crowdfunding schemes when kicked off of mainstream platforms.”