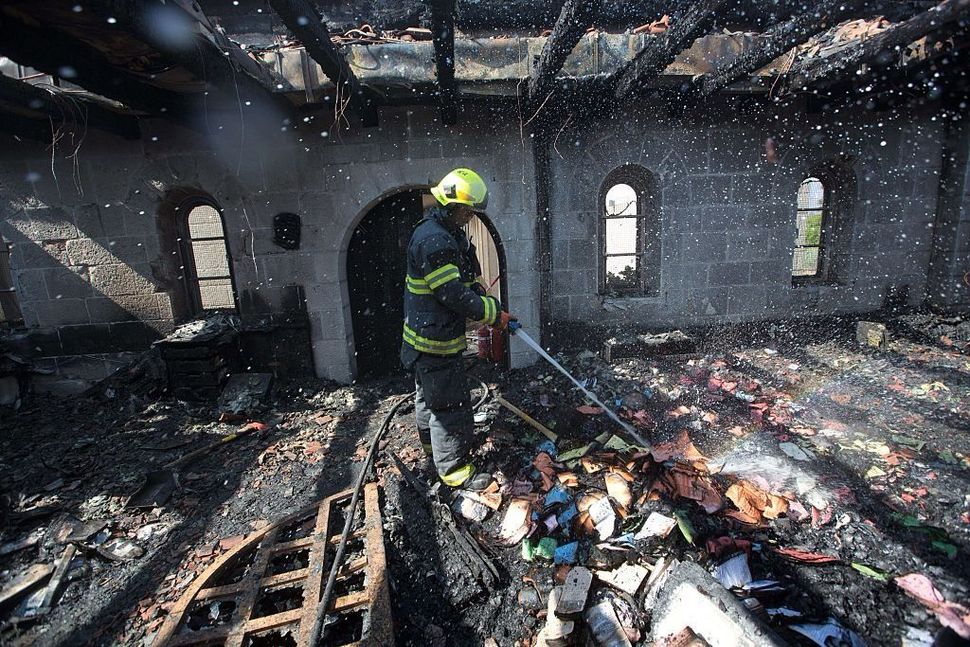 A fireman sprays water at the Church of the Multiplication at Tabgha, on the shores on the Sea of Galilee in northern Israel, on June 18, 2015, in the aftermath of an arson attack. Image by MENAHEM KAHANA/AFP/Getty Images

(JTA) — A 22-year-old Jewish man known to have extremist views was sentenced to four years in prison for the 2015 arson at a historic church in northern Israel.

The Nazareth Magistrate’s Court also ordered Yinon Reuveni to pay some $14,000 in compensation to the Church of the Multiplication of Loaves and Fishes in the Galilee, a Roman Catholic church built at the site where Christians believe Jesus multiplied bread and fish to feed 5,000 people.

The court had convicted Reuveni in July and said his sentence will be counted from his original arrest in July 2015.

A suspected accomplice, Yehuda Asraf, 21, was acquitted in July.

Reuveni was indicted last year for the arson and charged with another one in Jerusalem. According to the indictment, Reuveni committed the church arson due to negative beliefs he held about Christianity.

According to the Israel Security Agency, or Shin Bet, he and his friends belong to an ideological group seeking to “change the government and bring closer the redemption,” among others things by targeting Christian sites across Israel. Reuveni lived in the West Bank outpost of Baladim, which is said be a hotbed of extremism.

At the time of the attack, graffiti reading “False idols will be smashed” and “pagans” were found on the walls of the church, leading police to believe the fire was set deliberately as part of a hate crime.

The church, located in the area of Tabgha, is built on the site of a fifth-century church and contains restored mosaic floors from the time period. The attack, which was widely condemned in Israel, did not damage the church, but other buildings in the complex were harmed, according to The Times of Israel. Renovations to reopen the complex cost around $1 million.