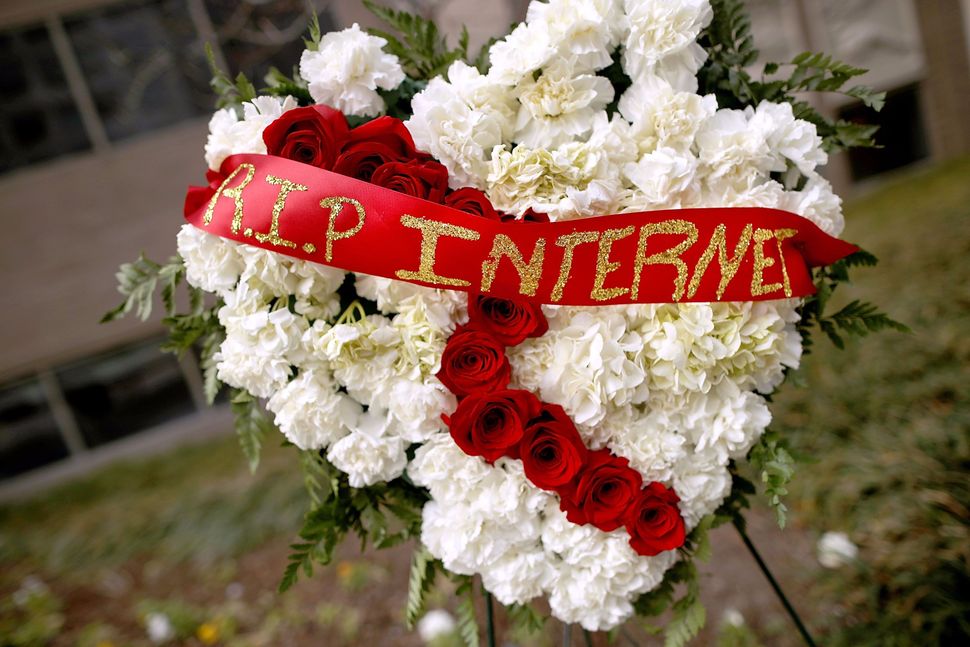 The Federal Communications Commission voted 3-2 Thursday to scrap so-called “net neutrality” rules, opening the door for a major reshaping of the internet. The rules prevented telecommunication corporations from charging fees for certain kinds of data usage — adding charges for video streaming, say, or social media use — instead of a flat rate.

Proponents of net neutrality say that without the rules, free speech on the internet will be a thing of the past. They worry that telecom giants like Time Warner and Verizon will be able to block sites they don’t like, tilting the internet’s content toward corporate interests and away from equal access.

David Segal, co-founder and director of Demand Progress, a not-for-profit that lobbies for civil liberties, said that’s not just a problem for internet junkies — it’s an issue for Jews.

“The repeal of net neutrality should be an issue of concern to Jews and to any religious or racial or ethnic minority, because it reduces the ability of people to communicate their concerns to the broader world,” Segal said.

Rabbi Sharon Brous warned that social justice would be the loser in a nation without net neutrality.

“I can’t join you in your struggle if I haven’t heard your story,” said Brous, of IKAR in Los Angeles. “An open Internet calls us to hear one another’s stories and beckons us to stand in solidarity for justice, dignity and peace.”

Segal highlighted that minority groups who already have limited access to the internet — such as the rural poor, or Hasidic Jews — will be further marginalized.

He added that if the repeal goes unchallenged, the internet will be a very different place than it is today.

“We’ll see an internet that is shaped around [corporate] interests, and not around the interests of rank and file internet users,” he said. “It will be about extracting profits and about pushing political agendas.”