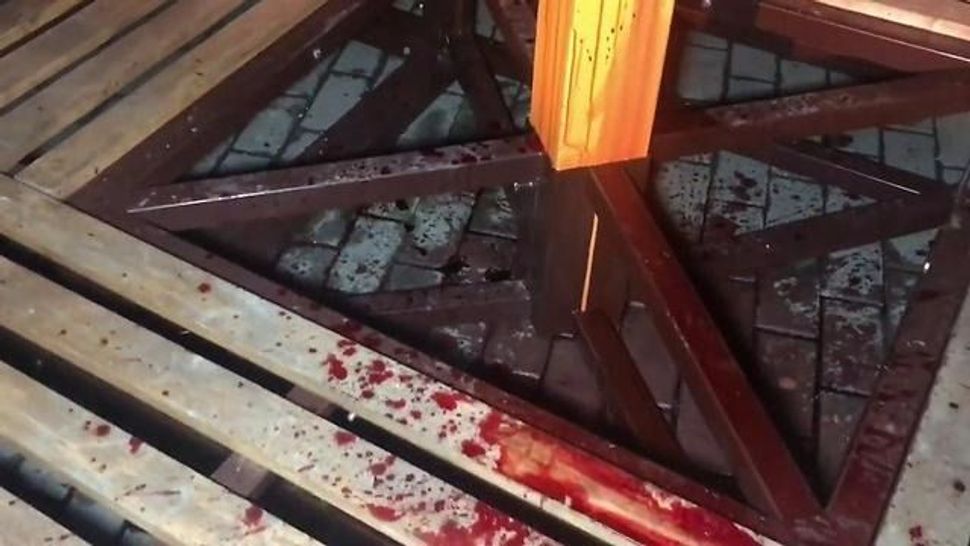 Blood thrown on the base of Kiev’s menorah. Image by Kyiv Operativ

(JTA) — A Hanukkah menorah at a synagogue in the Ukrainian capital of Kiev was doused with red liquid resembling blood and vandalized by unidentified perpetrators who drew a swastika on it.

The incident happened Sunday at Podol synagogue in Kiev, according to Eduard Dolinsky, the director of the Ukrainian Jewish Committee. The several foot tall menorah was standing outside the building. Police are checking whether the liquid is blood, possibly from a pig.

Reuven Stamov, a local rabbi, took pictures of the aftermath of the attack, showing the thick, dark red liquid at the foot of the menorah.

The incidents have taken place amid a divisive public debate in Ukraine over the conferring of state honors on nationalists who incited hatred against Jews during the 1930s and 1940s, including for some who collaborated with the Nazis.

“Whoever renames streets after leaders who murdered Jews shouldn’t be surprised by the targeting of a menorah and Jewish symbols today,” Ukrainian-born activist Alex Tentzer told Ynet News.

Last month, an anti-Semitic slur was painted on the wall of a Jewish charity in western Ukraine.

The black graffiti saying “death to the kikes” was discovered on the exterior wall of Uzhgorod’s Hesed Shpira charity, which is funded by the American Jewish Joint Distribution Committee, or JDC.