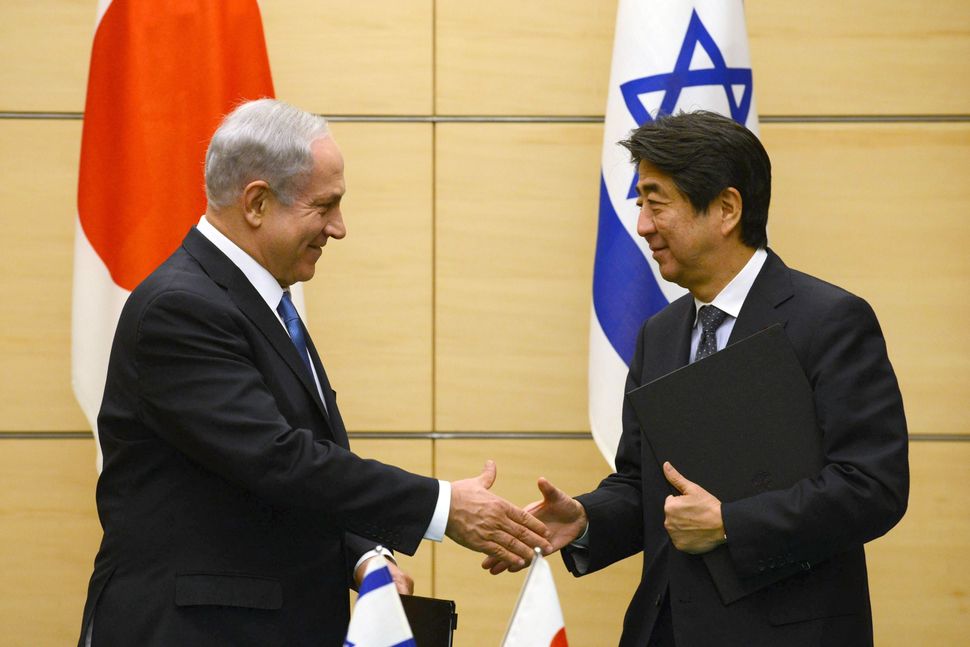 Israeli Prime Minister Benjamin Netanyahu shakes hands with with Prime Minister of Japan Shinzo Abe during a meeting May 12, 2014 in Tokyo, Japan. Image by Kobi Gideon/ GPO via Getty Images

Netanyahu reportedly has conditioned his participation on approval from the Trump administration.

The initiative by Japanese Prime Minister Shinzo Abe comes as Tokyo completes a decade of involvement in the “Peace Corridor” project, an Israeli-Palestinian-Jordanian-Japanese venture in the Jordan Valley launched in Tokyo in 2007, Walla reported.

According to the news website, Japan is one of the largest contributors to the Palestinian Authority, and in the past decade it has increased its economic involvement in Israel and has called for a peace agreement on the basis of economic interests.

Kono arrived in Israel on Monday and will continue on to Jordan, Turkey and Oman. He met in Jerusalem with Netanyahu, President Reuven Rivlin, and Minister of Regional Development Tzachi Hanegbi, and in Ramallah with Abbas.

The Palestinians have said they will not work with the United States on peace efforts since President Donald Trump earlier this month recognized Jerusalem as Israel’s capital, saying the U.S. is not an honest broker.