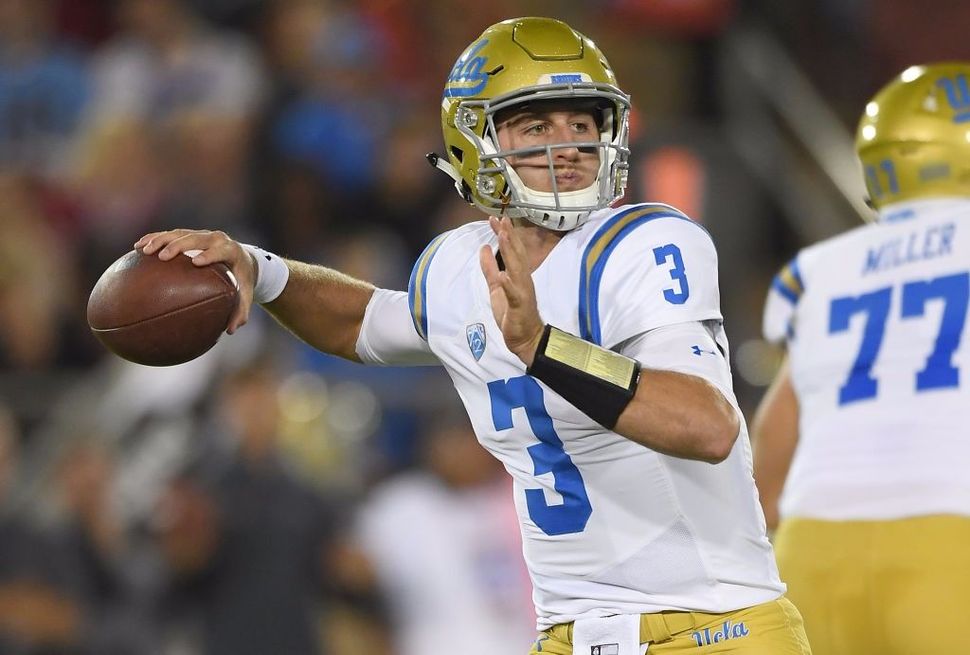 Josh Rosen, the star quarterback for the UCLA Bruins, is expected to declare his eligibility for the 2018 NFL draft, where he will likely be one of the top picks, if not #1 overall.

At the age of 20, Rosen is already one of the most prominent Jewish athletes in the United States, both for his personal success on the field and for his willingness to speak his mind. Here’s what you need to know about him:

He comes from an athletic family:

Rosen’s father Charles Rosen is an orthopedic surgeon who was once a nationally-ranked ice skater. His mother Liz Lippincott, a former journalist, was the captain of the lacrosse team at Princeton University.

He was a star youth athlete in two sports:

Rosen was a top tennis player as a child, ranked #1 for his age group in Southern California. He switched his focus to football when he enrolled at St. John Bosco High School, one of the top football schools in the country. He was named a USA Today High School All-American, and was ranked by Rivals.com and Scouts.com as the best quarterback in his high school class. He also had a 4.3 GPA. Rosen chose to attend the University of California, Los Angeles, less than 20 miles from his hometown of Manhattan Beach.

He was one of the best college quarterbacks in the country:

Rosen’s stats at UCLA were incredibly impressive, though the Bruins struggled overall, going 18-20 in Rosen’s three seasons. Rosen completed over 60% of his passes and threw for 9,302 yards and 59 touchdowns, and broke the school’s single-season record for most passing yards in a season. He was named a Freshman All-American in 2015 and was on the All-Pac-12 second team in 2017. His most notable game took place was in the 2017 season opener, when he went 35-59 for 491 yards and four touchdowns to lead the Bruins to an epic 45–44 comeback victory against Texas A&M — the second-biggest comeback in NCAA history.

He has struggled with injuries:

Rosen missed half of his sophomore season with a shoulder injury, and was forced to miss the Cactus Bowl his junior year after suffering a concussion.

He’s not afraid to speak his mind:

Unlike many football players who fear causing a “distraction,” Rosen is not afraid to make his voice heard. He has called the NCAA’s system of college sports amateurism “indentured servitude,” and claimed that “football and school don’t go together” because of the heavy loads of practice, travel and schoolwork student-athletes have to bear. He defended players who sit out of bowl games in order to protect themselves from injuries before the NFL draft. And he’s expressed willingness to turn down millions of dollars in guaranteed money in order to land in a good playing situation: “I’d rather be a lower pick at the right team than a higher at the wrong team,” he said.

Rosen is adept at social media, though he raised some eyebrows last year when he posted a picture of himself golfing at Trump National Golf Club wearing a hat that said “F—- Trump.”

He’s expected to be a top NFL draft pick:

Though Rosen has not yet declared his eligibility for the NFL draft, he is expected to do so in early 2018. Mock drafts have shown him going to the Cleveland Browns, New York Giants and New York Jets.